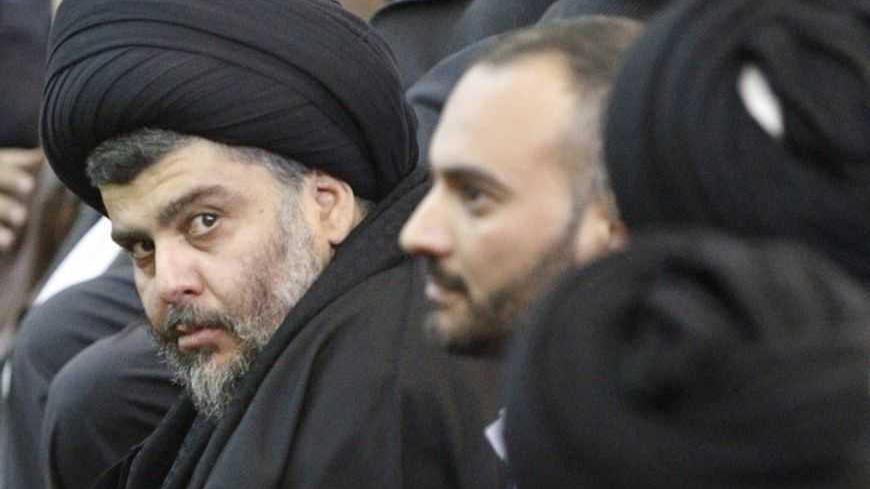 The controversial cleric Muqtada al-Sadr is paving the way for the collapse of Iraqi Prime Minister Nouri al-Maliki's government. On March 19, Sadr issued a strongly worded statement in which he criticized the government and declared that "staying in the government is a sin and a fatal error." When a Shiite cleric uses the word "sin" in Iraq, it serves to prohibit or forbid.

In the statement, released by his office in Beirut, Sadr said, "The government is selling its land to the south, and claims that al-Qaeda controls some of Iraq's western and northern provinces. The country is without a president, the parliament is weak, and the judiciary is politicized. Thus, staying in this government has become more damaging than useful; remaining in the government assists 'sin' and aggression."

Sadr's release, a copy of which Al-Monitor obtained, came just hours after a series of bombings by al-Qaeda hit Baghdad and the cities of Diyala, in the east, and Hilla, 100 kilometers south of Baghdad. Approximately 20 car bombs left more than 220 people dead and wounded. Sadr warned Maliki, who heads the Islamic Dawa Party, that he would be considering whether to withdraw from the government or suspend his participation in it, along with leaders in the political bloc Sadr heads.

Approximately one hour after the bombings, the Maliki government decided to postpone provincial council elections in the western city of Anbar and the northern city of Mosul for security reasons. Sadr let his anger at the decision be known, saying that Maliki had taken the action in political self-interest, arguing that it would harm Iraqi Sunnis.

According to Sadr, "What has happened in terms of marginalizing Iraq's Sunnis is an unforgivable disaster. The postponement of provincial elections in Anbar and Mosul is not permissible, given that it marginalizes the Sunni element." He stressed, "Postponing elections across the country would never be acceptable, as it is based on tyranny and dictatorship; it is an injustice."

Along with Sadr, other political forces have accused Maliki of being Iraq's new dictator, taking the same approaches as Saddam Hussein, the late Iraqi president whose execution order Maliki signed only a few years ago. Sadr asserted in his statement, "Canceling or postponing the elections at the hands of Maliki, the commander in chief of the armed forces, without a doubt reinforces tyranny."

Observers believe that the postponement serves the interest of local governments that maintain good relations with Maliki. The decision to put off elections will extend the current mandates of the Anbar and Mosul governments. Meanwhile, Iraqi politicians and activists participating in Sunni demonstrations in these regions claim that the postponement targets them and is part of a political deal between Maliki and his supporters in these provinces.

In his sharply worded release, Sadr noted, "Every minister who voted in favor of the decision to postpone elections should repent and realize that he has contributed to the suppression of Iraq as a whole and the repression of Shiites. This is true whether they did so knowingly or not, and includes those who have sought refuge with me [in Sadr's movement]."

Ali al-Moussawi, media adviser to Prime Minister Maliki, announced that the council of ministers had unanimously decided to accept the request put forth by Anbar and Nineveh provinces to postpone elections. Moreover, he confirmed that the security committee had issued a report asserting that the transparency and security of elections could not be guaranteed at this time.

Sources from the commission informed Al-Monitor that some electoral candidates had been assassinated in Anbar and Mosul, while hundreds of commission staff had fled their offices in Mosul following death threats.

Today, it seems that Sadr has come out stronger than ever against Maliki. If Sadr continues with his efforts opposing him, perhaps the hour of Maliki's ouster has arrived. Aside from the Sadrist movement, Maliki has no one on his side other than ministers from his own party, the ruling Shiite alliance and defectors from Ayad Allawi's bloc. They do not constitute a large force within the government.

Ali Abel Sadah is a writer and journalist from Baghdad working in Iraqi and broader Arab media. He was the editorial manager of a number of local newspapers and a political and cultural reporter for more than 10 years.