Iraqi cleric Muqtada al-Sadr, leader of a major Iraqi Shiite force, shocked the country by dissolving most of his political operation. 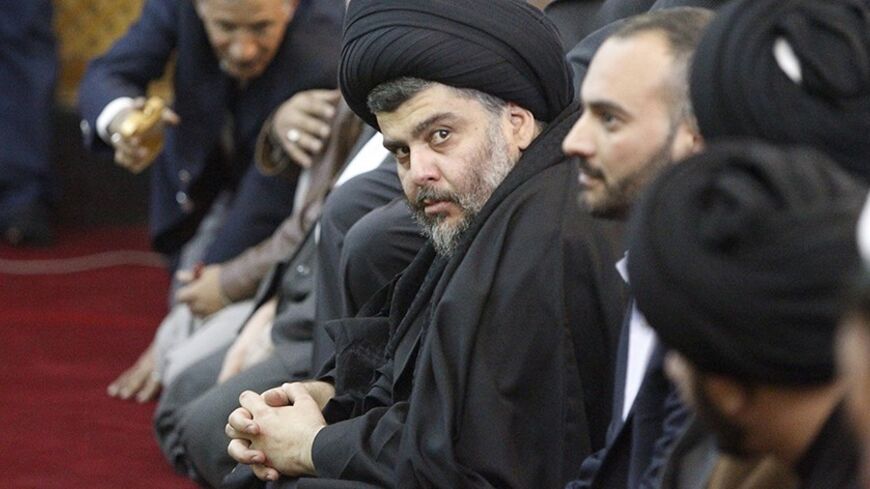 Iraqi cleric Muqtada al-Sadr has decided to retire from politics and has cut his relationship with the political and organizational representatives belonging to his movement. The political situation in Iraq has a new twist.

The surprise caused by Sadr’s statement issued on the evening of Feb. 15 was met with confusion by the political elites close to him. They heard of the decision through the media — and so did Sadr’s grassroots supporters, the Iraqi political parties and the general public.

Sadr announced in a brief statement that he was closing all his offices and entities in Iraq, that he was cutting his relationship with his political representatives in the government and parliament and that he was retaining 19 cultural and charity institutions, which are run under his direct supervision.

Although the statement did not give clear reasons for this decision, there were signals alluding to its motives such as “ending corruption” in the name of Sadr's offices inside and outside Iraq, “ending the suffering of the Iraqi people,” disengaging from “politics and politicians” and saving the reputation of the Sadr family, which is revered.

These signals, in addition to leaks coming from people close to Sadr, pointed to an internal crisis between Sadr and his movement, ranging from Sadr’s loss of confidence in his offices, his associates and the political bodies that operate under his command; the discovery of financial corruption and the use of Sadr’s name in illegal acts, in addition to the fact that some of Sadr’s 40 members of parliament signed the controversial pension law, which provided exceptional privileges to parliament members and senior state officials. That law angered the street and infuriated top Shiite cleric Ali al-Husseini al-Sistani, who called on the public not to elect the forces that voted for the law.

But those reasons do not seem to justify Sadr’s major step, especially given that he could have expelled any deputy or figure in his movement without the need for dissolving it. And he could have made significant changes in the Sadrist current’s work and orientations.

Starting in 2008, Sadr has succeeded in changing how his political current works. He changed the militarist principles and foundations on which his current was founded in 2003. He dissolved and froze the military activities of the Mahdi Army militia and took centrist and peaceful positions in the various Iraqi crises. He showed his support for a comprehensive reconciliation in the country. He regained his relationship with Sunni Arabs and Kurds after a phase of hostility created by the civil war.

But his greatest achievement was his ability to control and neutralize his movement’s militia members. Thus, many of these members left Sadr and joined other militias such as Asaib Ahl al-Haq and the Hezbollah Brigades of Iraq, while others got involved in civilian duties.

During those years, Sadr was able to rebuild trust with Sunni Arabs after he had been at the forefront of those accused of involvement in the 2006-2008 civil war. This was a significant breakthrough, and it helped speed up the floundering government policies meant to fairly deal with the civil war.

Looking at Sadr’s movement over the last six years, he seems very capable of making drastic changes in his movement without the need to dissolve or restructure it. For that reason, common reactions to Sadr’s decision were confusion and suspicion. Some say that Sadr will reverse his decision, because in August 2013 he decided to retire from politics and then came back.

But people close to Sadr told Al-Monitor he will not reverse his decision this time, at least not before the April elections. They said that Sadr’s decision was made months ago, and this shows that his retirement was planned and not a result of emotions.

But why was this decision taken? The answer is not clear. Sadr’s situation after the formation of the government, his bone-breaking fight with Prime Minister Nouri al-Maliki, the failure to isolate him in 2012 and the absence of signs of political change in Iraq after the elections amid renewed talk of a third term for Maliki may all have been factors that frustrated Sadr.

Sadr expressed this frustration in an interview with me for Al-Hayat at the end of 2013, when he declared that Iraq is heading for division and that there is no hope for political change in Iraq.

In that interview, Sadr expressed feeling isolated. He spoke about a lack of Arab or Western enthusiasm to receive him as an Iraqi leader with popular support, and he expressed a desire to visit European and Arab countries. He also did not rule out visiting the United States.

“Frustration” might be an appropriate description at this stage, at least to explain Sadr’s last decision, which was reflected in the form of mass resignations by his parliament deputies and by prominent leaders' demands for Sadr to reverse his decision.

In addition to the frustration about how foreign forces treated him, in the same interview Sadr also complained of the failure of his partners in Iraq to respond to the moves he made to prevent civil war. He blamed the Sunnis for not reciprocating his positive moves. He said that he prayed behind Sunni clerics, but none of them agreed to pray behind him. Sadr also blamed the president of the Kurdistan Region of Iraq, Massoud Barzani, for not meeting his invitation to visit Najaf in response to his visit to Erbil in mid-2012.

But all that is not enough to justify Sadr’s frustration. Perhaps he did not want to turn his current — which he has always described as a “popular current” — into a political party. The description “popular current” has not produced a clear structure for the current, a distribution of roles or an internal decision-making.

The close link between Sadr the cleric, who carries an aura of sanctity inherited from his family, and Sadr the political leader, who has often displayed political statesmanship and pragmatism, has produced different power centers within his current as well as actions in his administration that may have helped break down some of his administrative structures.

As we await what will happen in the coming days in Iraq and for clear signs that Sadr’s decision is final, the status of a significant and popular political current that occupies a large part of the political, administrative and military structure in the state is now unknown. No other Shiite force can now attract Sadr, for ideological, political and historical considerations. Sadr’s supporters will not likely rush to the polls or to political work without their leader.

The other forces, especially the Shiite ones, should carefully reconsider their political and electoral calculations. And that will not be easy amid a confused Iraqi political reality that cannot handle major changes in the power balance.