Iraq elections: Will Sadr seek a new beginning with Turkey?

Ankara is welcoming Iraqi Shiite cleric Muqtada al-Sadr’s stand against foreign intervention and military presence — as long as it doesn't apply to Turkey. 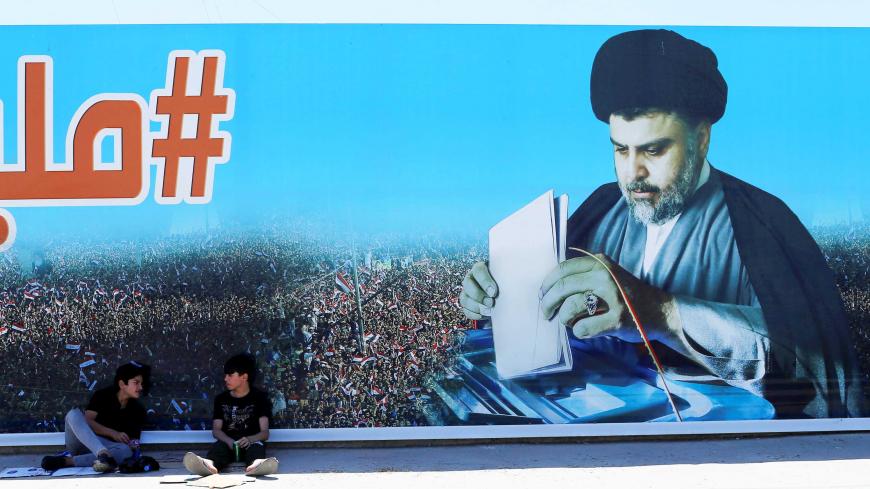 Boys sit next a poster of Iraqi Shiite cleric Muqtada al-Sadr in the Sadr City district of Baghdad, Iraq, May 19, 2018. - REUTERS/Thaier al-Sudani

Iraqi Shiite cleric Muqtada al-Sadr’s coalition scored major points in the recent parliamentary elections with Sadr’s positions against virulent influence peddling and the presence of foreign military forces in the country. His growing power seems to worry the United States and Iran. Turkey's not sure what to think.

As Sadr didn't actually run in the elections, he can't become prime minister, but his already substantial influence is expanding because of his coalition's victory. If Sadr structures a balance between Sunnis-Shiites and Arabs-Turkmens while pushing Iran back, the outcome might well be a promising beginning for Turkey. But there is also tension because Sadr's definition of "foreign military presence" includes Turkey. Sadr's not saying, “Americans should leave, but Turkish troops at Bashiqa military base can stay.” And one should not forget how in 2016, nationalist Iraqis laid siege on the Turkish Embassy in Iraq with a simple hand signal by Sadr.

In the May 12 elections, the Sairoon Alliance that Sadr formed with the Communist Party and liberal groups won 54 seats, more than any other coalition, though not enough for a majority. The Fatah list, which included the Popular Mobilization Units and five other groups that gained prominence in the war against the Islamic State (IS), won 47 seats. The Victory Alliance of Prime Minister Haider al-Abadi won 42 seats, and the State of Law Coalition of former Prime Minister Nouri al-Maliki won 26. The Kurdistan Democratic Party won 25.

Iran insisted that Iraq's next prime minister come from the Shiite bloc, which spoiled Turkey’s game plan of supporting the Iraqiya Sunni bloc, under secular Shiite leader Allawi. Ankara is sensitive about the Sunni role in the country — Turkey is predominately Sunni — and was seriously upset by Maliki's win in 2014, and the situation only got worse after Abadi came to power and began challenging the Bashiqa base issue. Turkey has rejected repeated requests from Iraq's government to close the Bashiqa base.

“We will not accept anything other than the complete withdrawal of the Turkish troops in the Bashiqa base,” Abadi said in January 2017. “The sovereignty of Iraq is nonnegotiable.”

Sadr’s efforts to form close relations with Sunni Arabs, Turkmens and Kurds against Maliki are similar to Turkey’s classic positions on Iraq. But a new wave of Iraqi politics is assuming a more nationalist outlook, provoking negative sentiments against Turkey.

Before the elections, Sadr disregarded calls to enter coalitions with leaders like Hadi al-Amiri and Maliki, who are thought to be linked to Iran, and promised a government of technocrats. It's not yet clear how Sadr will manage his approaches to the United States, Iran and Turkey. But there are important factors that will force him to be flexible.

There are reports that Sadr wants to create a new coalition with Abadi and perhaps Hakim. If that works out, Sadr may have to ease his anti-Iran position. Sadr, who spent more than three years in self-imposed exile in Iran while his Mahdi Army was fighting against the US forces in Iraq, can't fully exclude groups like Fatah that are considered instruments of Iranian political interests. Nobody expects Iranian strongman Gen. Qasem Soleimani — a top commander of the Islamic Revolutionary Guard Corps' Quds Force — to easily agree to withdraw Iran from Iraqi politics. There's a rumor that Iran is trying to persuade Abadi to form a coalition with Ameri and Maliki to block Sadr's aspirations, but Sadr appears to have beaten Iran to the punch by negotiating with Abadi.

The United States, which invested in Abadi in the elections, is now facing an interesting test. Sadr’s visits to Saudi Arabia and the United Arab Emirates — two of the countries leading the anti-Iran front — in July and August, respectively, might be an important signal that US policy in the region is evolving.

Sadr's unexpected formation of relationships with US allies could indicate an easing up of Americans' anti-Sadr positions, which they have held since former US President George W. Bush invaded Iraq in 2003 and sought to eliminate the cleric. This is turn may well dilute Sadr’s fervent anti-Americanism.

Sadr’s apparent rapprochement with the Gulf actually might have compounded Sadr’s distrust of Turkey. In the ongoing Gulf tensions, Turkey’s firm support of Qatar against the Saudis and the UAE has soured relations with those countries. But Sadr could soften his position when it comes to Turkey. The first significant sign of such a possibility is that Turkey’s ambassador in Baghdad, Fatih Yildiz — who had been waiting a long time for an appointment with Sadr — was invited to meet after the elections. After the meeting, Yildiz said, “I found an opportunity to talk with Sadr in a friendly atmosphere."

These assessments may be excessively optimistic, despite Turkey’s frequent message that it is not an enemy of Iraq. At least now the Bashiqa base status will be back on the agenda. Sadr’s May 18 Twitter message that “neighboring countries are friends, not enemies” may indicate an intention to make a new start with both Turkey and Iran.

Nevertheless, Iraq's collapse after the 2003 occupation of the country — with the ensuing terror and chaos, influence peddling, political sectarianism and dysfunction of public institutions — has led citizens to think less about their sectarian differences, or whether they favor Turkey or Iraq, bringing them together as Iraqis first and foremost.

Iran seems no more likely to give up its political meddling than Turkey is about to give up its military presence. Turkey’s claim to be the guardian of Turkmens and Sunnis will continue to be treated with deep suspicion as a divisive influence.