Iraq’s Muqtada al-Sadr started his political career as a radical Shiite cleric but has transformed himself into a force of moderation and stability, writes Mustafa al-Kadhimi. 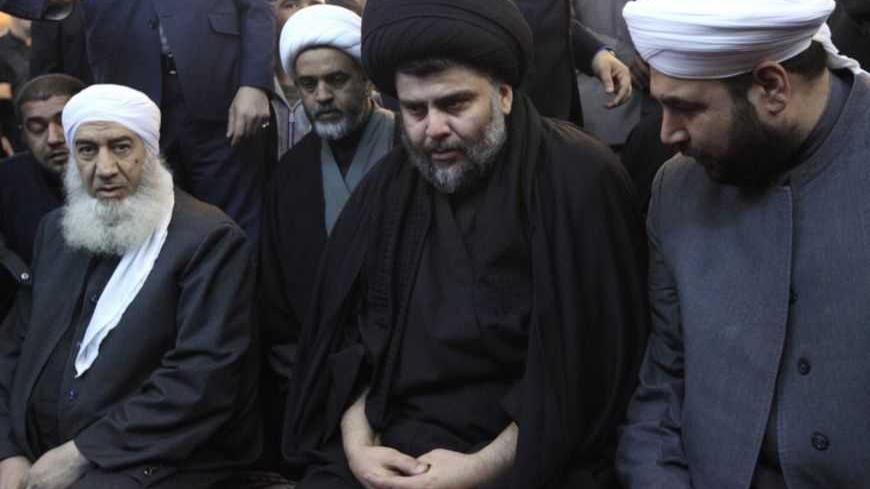 During Iraq’s recent crises, the young religious leader Muqtada al-Sadr has presented himself as a mature and visionary politician. In the past, Sadr, his movement and its military wing, the Mahdi Army militia, had a different image.

The change in Sadr’s political approach is not surprising. The political experience he has gained since 2003, the circumstances that accompanied the formation of his movement and splits at different stages, in addition to his studies in Iran and his personal experience resulted in the “New Sadr,” who is now a main safeguard against the country sliding into civil war.

Since 2011, Sadr has had a completely new political discourse. He speaks of a civil and democratic Iraq, the rule of law, social justice, and fair governance. The young Shiite leader showed great courage when he sided with the Kurds and the Iraqi List against his ally in the National Alliance, Prime Minister Nouri al-Maliki. Sadr led a parliamentary campaign that ended with the passage of a law limiting how many terms the prime minister can serve. He also put his movement’s political and popular weight behind passing a national budget, even though that position intersected with that of the Kurds and the Iraqi List.

At end of 2012, demonstrations swept through a number of Sunni cities. They called for changes in the terrorism and de-Baathification laws and for the release of their detainees. In some instances, there were calls to topple the government and abrogate the constitution, but Sadr took a moderate position. He neither fully opposed nor fully supported those demands. Of all the Shiite forces, Sadr’s position was the closest to the demonstrators’ demands.

Sadr espoused a national discourse that rejected sectarian and ethnic biases. He sent representatives to meet the protesters and mediate between them and the government. That symbolic move, which achieved nothing significant on the ground, at least portrayed Sadr as a moderate political partner who does not build relationships based on sectarianism.

Sadr has left Tehran. He now moves around a lot and has not settled at a particular location, in order to prevent the key Iraqi powers from influencing his decisions.

Even though he and his close associates have not explained why he changed his discourse, there is evidence to suggest that his relationship with Tehran is no longer perfect, especially after he did not follow Iranian directives of Iraqi issues.

Sadr’s political transformation may be explained by the following factors: First, he leads a young movement whose followers are mostly from historically poor, marginalized and oppressed areas. Second, he belongs to a school of thought and to a religious lineage that are open to new ideas and that take courageous positions in line with the national mood.

Sadr’s moderate Iraqi positions have been reflected in his regional positions as well. He had privileged relations with Turkey when Iraq’s Shiites were angry with Turkish behavior. He took positions close to those of the Gulf countries when they were being accused of supporting the insurgency. And he did all that without abandoning his distinguished relations with Iran.

The US withdrawal from Iraq may be an additional reason why Sadr has come to adopt non-violent positions. In fact, he has started opposing the carrying of arms and calls for respect of the law.

Of course, Sadr realizes that his political future in Iraq depends on him presenting himself as an alternative political choice. He has correctly read the Iraqi political scene and realized that political success cannot be achieved without reaching an agreement with the Kurds and the Sunnis, but before that, an internal Shiite consensus is required.

The new Sadr is different. He once said that his political moves, especially when he visited Erbil and allied with the Kurds and the Iraqi List, may have cost him support because of the sectarian polarization that has engulfed Iraq. But that stance is likely to have increased his support. For the first time, we see the Iraqi civil and democratic current being sympathetic to Sadr and his discourse. For the first time, he is a stabilizing factor in Iraq.

Sadr can still mobilize hundreds of thousands of supporters any time. He did that when he wanted the budget approved. But it seems that he has decided to settle political disputes by using the street less and political dialogue and consensus more. Even though his recent positions have cost him his movement’s radical elite, he has more than made up for it by earning the support of the Sunni and Shiite middle-class and liberal forces.