The electoral campaigns are starting for the April 2013 elections, with calls from senior clerics for clean campaigning by candidates, writes Mustafa al-Kadhimi. 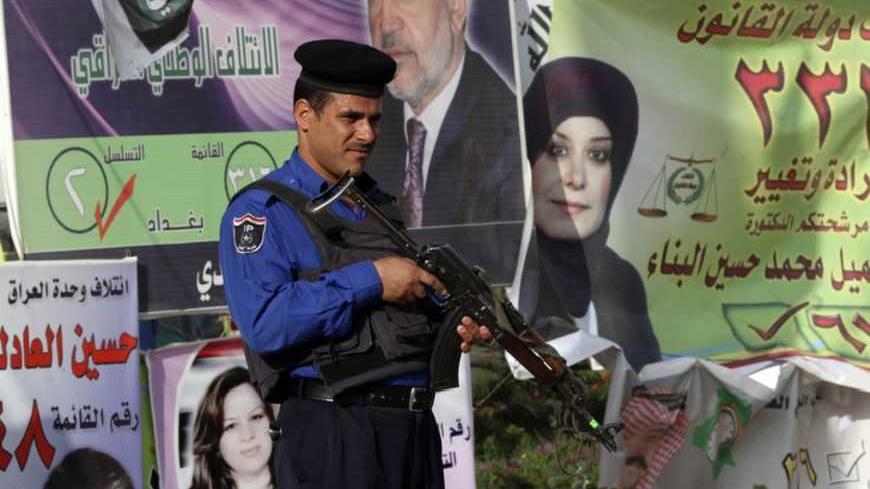 A few days ago, provincial electoral campaigns were launched in 14 Iraqi governorates. The provinces of the Kurdistan region and Kirkuk were not included.

As personal, political and familial propaganda reigned, election platforms tackling the development and the lack of services were — as usual — absent. The political parties and candidates did not present any real approach to the endemic problems, nor did they suggest mechanisms for solutions.

The electoral season that normally starts with provincial elections — scheduled for April 20 — and ends with parliamentary elections — set for 2014, was not any different from previous seasons. Political and economic crises, sectarian speeches and security concerns lie at the heart of any election. Yet, this season is characterized by additional phenomena, such as the rise of political families and undeveloped political performance.

A total of 8,100 candidates belonging to 265 political groups and 50 coalitions, at least half of which represent the parties that have been in power since 2003, are competing for a total of 447 seats.

The political alliances, however, have differed somewhat from those formed in 2009. Some Sunni powers have taken part in the Muwahhidun movement, leaving the Iyad Allawi-led Wifaq party flying solo in the majority of provinces. Shiite powers, on the other hand, united under the flag of the National Alliance have allied with different local powers.

The sectarian nature of the country has caused the usual unbridled influence on traditional, religious powers; Sunnis ran for elections in Sunni-dominated regions and were completely absent in Shiite cities, and vice versa.

Nonetheless, these powers have tried to form alliances with local powers in order to add diversity to their performance, for fear of being washed away as Iraqi voters tend to elect candidates from outside well-known, prominent parties. The odds of this scenario are high, given that dozens of new coalitions and powers, alongside 6,000 new candidates, have emerged.

Posters were ubiquitous and haphazardly hung, in a clear sign that political powers are still adopting the same mechanisms.

Residents have complained about the “primal” publicity methods that are an eyesore; posters are piled up everywhere, some torn or covered with other posters. Additionally, the trend of large posters hung on high-rise buildings has spread, mostly characterized by poor designs and unmatched colors.

Funny posters have been circulated on social media websites; one MP has called on voters to elect her husband, has stood proudly next to him in the photo and has emphasized the caption “Vote for my husband Abu Hatem.” Another candidate has used her husband’s photo instead of hers, urging the voters to elect “Mrs (…) the wife of Mr. (…).” Typos have made it to the scene as well: One poster reads “my wallet comes first,” instead of “my governorate comes first,” given that the Arabic equivalents of the two words have only one different letter.

In general, publicity mechanisms have not changed at all. Candidates rely on tribal sheikhs and religious figures to ensure votes. Some others use the photos of political leaders or raise political and sectarian slogans that have nothing to do with provincial elections that must be solely linked to services and problem solving.

On the other hand, local media outlets have broadcast interviews with residents complaining that the candidates only show up during the election seasons to dole out insignificant subsidies or heap up promises.

According to the electoral law, each city is a constituency; the voters are allowed to choose one list out of which they elect one candidate.

Several months ago, the electoral law was amended to distribute the seats so that no candidate amassed enough votes to win, to the candidates that gained the higher percentage of votes within the lists. Previously, the seats were given to the lists with the highest number of votes.

Religious Guide Grand Ayatollah Bashir al-Najafi has warned the candidates from using public money to fund their campaigns, and from giving false promises. He also called on “broad participation in the elections and on denying votes to the powers whose ministers are corrupt, reiterating that selling votes is a sinful deed.”

“We call on the citizens to take part in the next provincial elections; not participating will allow corrupt figures to stay in power,” declared Najafi in a statement issued yesterday [March 7]. He called on “prioritizing and preserving the dignity and money of the people,” stressing that “the votes carry a responsibility and selling them expands corruption within the government and is deemed sinful.”

Two days ago, Grand Ayatollah Ali Sistani called on the candidates not to besmirch the reputation of their competitors, give false promises or violate electoral regulations.

Even though preparations are carried out, the possibility of postponement is looming given the current political crisis and the anti-government protests that have erupted in Sunni-dominated Anbar, Mosul, Saladin and Diyala.