Iraq’s attempt to rid itself of the legacy of the former ruling Baath Party must account for the fact that many former party employees will be worse off as a result, writes Mustafa al-Kadhimi. 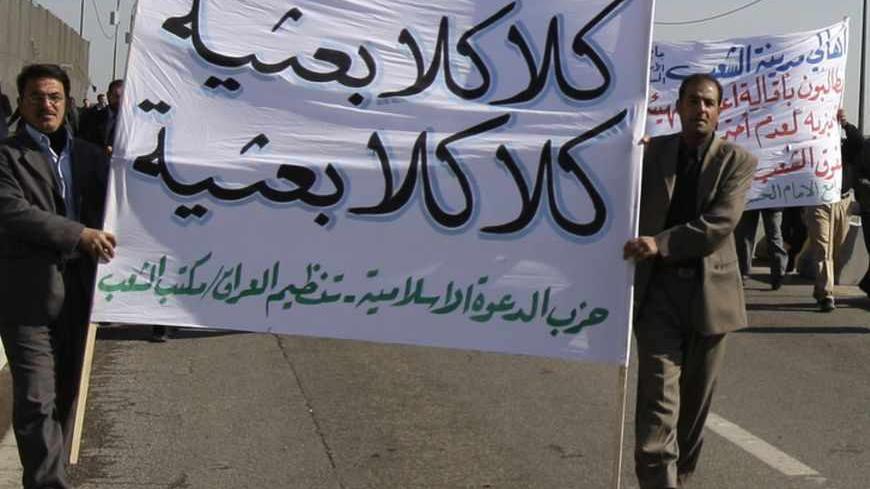 Protesters hold up a banner that reads, "No, No to the Baathists," during a rally against the former Baath Party in Baghdad, Feb. 7, 2010. - REUTERS/Saad Shalash

The Iraqi government's recent decision to amend paragraphs in the Justice and Accountability Law related to de-Baathification and show flexibility in dealing with Baathists has induced a storm of conflicting reactions. The most heated reactions have come from Shiite political and cultural circles, which have insisted that Baathists cannot be dealt with before achieving justice for their victims.

The Baath Party, which ruled Iraq for more than three decades, is deserving of the measures contained in the Iraqi constitution. The constitution criminalizes the party and prevents it from participating in Iraqi political life,  against the backdrop of the crimes it committed and the disasters it caused throughout its reign.

But what applies to the Baath party should not apply to the Baathists as individuals. Everyone in Iraq agrees that a set of pressures, compromises and ambiguities forced millions of Iraqis to join this party, which reduced the state and linked all of its aspects to the party. It even linked the concept of "national identity" to "belonging to the Baath Party.”

But the agreement on this fact has not prevented Iraqi politicians from using the Baath Party issue for very bad political purposes. The de-Baathification issue was often used for political or partisan purposes, and was interpreted by some — such as the Sunni Arabs — as a "sectarian" act. It was also often used for propaganda purposes, or bargains that are actually different from the very essence of the "de-Baathification" law itself.

In this regard, it should be remembered that the de-Baathification law, which later turned into the law of "Accountability and Justice" is not always a constitutional text. The law has offered the people a chance to stop the consequences of the law as soon as it reaches its purpose.

The law has three main goals:

The second goal is to punish criminals and leaders of the former regime and members of the Baath Party who have Iraqi blood on their hands without targeting innocent Baathists.

The third goal is to keep the Baath Party away from political life and prevent it from trying to poison the democratic experiment.

More than 10 years later, none of these three goals have materialized, although this was a priority for Iraq's political circle, which fought Saddam Hussein's regime for decades, and got caught up at a later stage by the requirements of power and electoral competition. Thus, it failed to address these crucial issues, which not only concern the victims of the former regime, but also hundreds of thousands of Baathists who are not involved in the crimes of this regime and who are waiting, along with their families, for the state to end its mission by compensating the victims and punishing the criminals.

Nations cannot be built upon permanent grudges or eternal stances. At a certain point, people reach the conviction that they need to move on and cooperate to build a future.

Unfortunately, political and partisan circles did not help the Iraqi people get to this important point. They have rather laid the foundations for a complex system through which they can exploit the Baath Party issue indefinitely.

The emotions induced and the refusal to deal with former Baathists or to even give their families pensions in return for the jobs that they occupied in the state cannot be discounted. These are sincere feelings, which prove that the wounds have not healed yet. Ten years later, the question arises as to the party responsible for keeping the Iraqi wounds open and untreated all this time.