Is Muqtada al-Sadr retiring or repositioning?

After Iraqi Shiite leader Muqtada al-Sadr declared his intention to withdraw from politics, signs suggest that it may have been a move aimed at political repositioning before the upcoming elections. 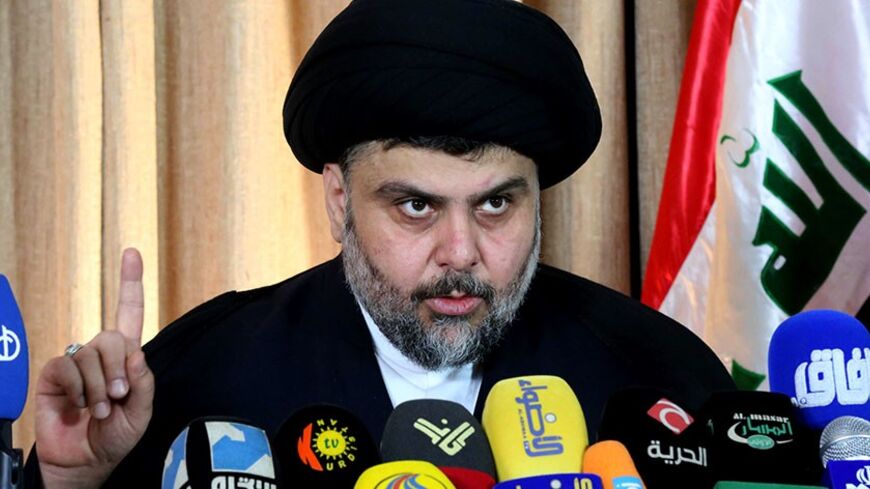 The announcement of Muqtada al-Sadr, the leader of the Sadrist movement, that he is retiring from politics triggered many reactions from political and popular circles in Iraq, as well as a lot of discussions and speculations about his motives.

For some, the decision put an end to the Sadrist movement as a force in the political process. Others considered his move to be a repeat of earlier similar steps to “retire” or “isolate,” that he soon reversed. The speech he gave on Feb. 18, two days after his decision to retire, suggests that Sadr’s step was not a complete abandonment of politics, but perhaps a way to reposition himself politically and electorally.

Sadr’s speech was political par excellence. He talked about the failures of the Iraqi political process and sharply criticized Prime Minister Nouri al-Maliki, whom he called a dictator and a tyrant. He also criticized parliament, which he considered a weak authority with members seeking personal gains only. Sadr expressed surprise at the support Maliki is getting from the “East and West,” a reference to Iran and the United States. This may add credibility to reports that Iran is pressuring Shiite politicians to support Maliki for a third term, but it may also mean that he wanted to anticipate such pressure by publicly distancing himself from the block’s decisions, which could be a way to circumvent such pressure in the future.

Sadr justified the decisions to dissolve his political offices and disengage from the Ahrar political bloc by claiming that his goal is to maintain the legacy of the Sadr family and its religious and moral status. This was a sign that Sadr was angered by actions of Sadrist bloc members and by reports of their involvement in financial or political corruption. But “the legacy of the Sadr family,” which is mainly linked to the personalities of Mohammed Baqir al-Sadr and Mohammed Sadeq al-Sadr is to engage actively in political and public affairs.

The basic intellectual principle that governs what Sadr followers call the “vocal hawza” is that the religious authority should play a key role in guiding the public life of the people, and that its role is not limited to doctrinal and theological issues. So this legacy may push Sadr to continue engaging politics rather than retiring, unless he is trying to make the legacy remain just that, a legacy, and not a political intellectual vision with a social dimension.

More likely, Sadr wanted to free himself from the negatives of his political bloc, many of whose members have been accused of deviating from the Sadr family approach. So Sadr may be repositioning himself as a spiritual and moral leader, not just the head of a political bloc.

Of course, such a move could harm the chances of the Ahrar bloc in the upcoming elections, because most voters support the bloc due to its association with Sadr. Therefore, Sadr’s declaration that he doesn’t support any political bloc and that he “stands with everyone at the same distance,” is tantamount to denying the bloc its main electoral advantage.

That may “cleanse” Sadr’s reputation and his social standing but will likely reshuffle the electoral deck, because most calculations indicate that the upcoming elections and their results will be significantly affected by the competition between Sadr and Maliki.

There aren’t many indicators about the future of the Ahrar bloc, whose many members hastened to withdraw from parliament and government after Sadr’s first declaration to resign. Sadr abandoning the bloc is expected to cause more confusion in its ranks and cause it to lose a lot of its electoral chances. However, this confusion is not going to affect the Ahrar bloc’s participation in the upcoming election, as announced by Dhi’a al-Asadi, the bloc’s secretary-general, after his meeting with Sadr. The bloc started a process of reformation by forming a new leading committee and replacing the head of its parliamentary bloc by another lawmaker.

If Sadr decides to revive his link to the bloc (albeit indirectly), that may enhance the chances of its candidates and perhaps open the door to large-scale changes in the nature of its leadership and orientations. Sadr is currently subjected to political and popular pressure to reverse his decision. Except for Maliki’s bloc, which is served by Sadr’s withdrawal from the election, other leaders such as Osama Ammar al-Hakim, Osama al-Nujaifi and Iyad Allawi have asked Sadr to invert his decision.

In his latest speech, Sadr reaffirmed commitment to his decision, but he left the door open for alternative arrangements in the future. In these arrangements, the name of Jaafar al-Sadr, Muqtada's cousin and the son of Mohammed Baqir al-Sadr, is mentioned. In the last general elections, Jaafar was part of Maliki's bloc, but he withdrew from parliament and the bloc to protest being sidelined. Despite his limited political experience, Jaafar has a prominent status, which was enhanced after his decision to resign from parliament because Iraqis generally don’t regard lawmakers very highly.

In recent months, there have been signs that Sadr and Jaafar are coordinating. If this coordination is enhanced, it can fill the void left by Sadr’s withdrawal from leading the Ahrar bloc, and lead to the formation of an alternative Shiite political project that enjoys broad popular support and can compensate for the failures of the Shiite political class, which has been running matters since 2003. But this remains just a hypothesis that may not materialize. In any case, Sadr's next steps will greatly determine the course of the next election.