Muqtada al-Sadr, the most powerful man in Iraqi politics?

Many believe the storming of the Iraqi parliament by pro-Sadr protesters will only destroy the space for political work in a country where armed conflict has long been a way of settling differences. 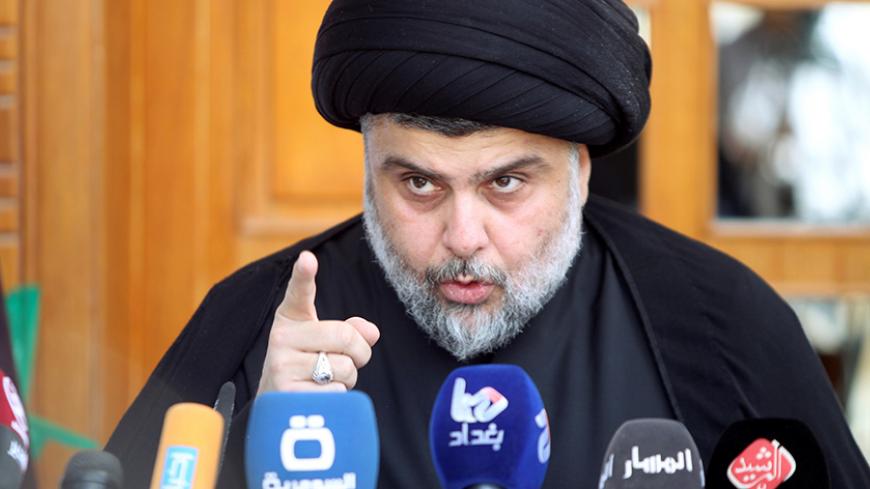 ERBIL, Iraq — In a dramatic shift, 13 years after the US-led invasion of Iraq, Muqtada al-Sadr, the once-ignorable Shiite cleric, has reinvented himself as the central figure in a chaotic push to reform the country's broken political system. After Sadr's supporters stormed Baghdad's Green Zone late April, many wonder what his ultimate aim might be.

Sadr’s political initiation began in a remarkable fashion: when his supporters were accused of murdering Abdul Majid al-Khoei, a promising rival Shiite cleric, the day after Saddam Hussein’s regime was toppled in April 2003. Loathed by US political and military officials and underestimated by Iraqi politicians returning from exile, Sadr was for years considered nothing more than a menace. The mainstream Western press often described him as a “firebrand” or “radical.”

Nevertheless, capitalizing on the spiritual legacy of his father and uncle, Mohammed Mohammed Sadiq al-Sadr and Mohammed Baqir al-Sadr, both senior Shiite clerics executed by Hussein, Muqtada’s political fortunes rose steadily, making himself an actor to be reckoned with. In April 2004, he led a major rebellion against the US-led coalition that he considered an occupation force.

Today, amid popular demand for change in Iraq, Sadr has put his political capital on the line in advocating an overhaul of the Iraqi political system. “Muqtada has clearly enhanced his status by adopting a populist, non-sectarian stance at a time when Iraqis are peculiarly conscious of the corrupt and dysfunctional nature of their government because there is not sufficient oil revenue to cover expenditure,” said Patrick Cockburn, a Middle East correspondent for the British Independent and author of the book “Muqtada: Muqtada al-Sadr, the Shia revival and the Struggle for Iraq.”

Sadr has been supporting efforts by embattled Prime Minister Haider al-Abadi to form a Cabinet of ministers with technocratic and professional backgrounds and not beholden to political elites. Growing exasperated with Iraq's paralyzed political system, on April 20 Sadr suspended the activities of the Al-Ahrar parliamentary bloc, with which he is associated as a spiritual leader.

Then, on April 30, Sadr's supporters, who had for weeks staged protests on Baghdad’s streets, stormed the parliament building in the city's fortified Green Zone, which houses state institutions as well as the US and British embassies and has become a symbol of the country’s political dysfunction. This unexpected action sent shock waves through Iraq. With the country in the midst of a bloody war against the Islamic State, many feared the move on parliament might lead to the collapse of the state structure.

Ever adept and calculating, Sadr acted to prevent the dramatic maneuver from spiraling out of control, pulling his supporters out of the Green Zone after a 24-hour sit-in. The message was clear: Sadr showed he is willing to take extraordinary measures and that he can hold the country’s center of power at his mercy. Many now wonder if Sadr’s intent is to dominate the country’s political landscape, rendering himself the one calling the shots. His supporters say that is not the goal.

“The Sadrist current does not seek hegemony,” Dhia al-Assadi, former chief of Al-Ahrar bloc, told Al-Monitor. “If we sought hegemony, we would want a greater presence for ourselves in the Cabinet and other state institutions. … We are not trying to attain the office of prime minister.”

When on April 12 some 80 legislators staged a sit-in at the parliament building — allegedly to precipitate political reforms yet seen by many as muscle-flexing by those close to former Prime Minister Nouri al-Maliki — Sadr’s Al-Ahrar bloc joined in, too. His loyalist parliamentarians soon, however, ended their participation in the action sensing the agenda might detour from their own.

“The main factor for Al-Ahrar’s withdrawal from the members of parliament sit-in was their fear that former Prime Minister Nouri al-Maliki might benefit from their success,” said Abbas Kadhim, an expert on Iraq’s Shiites and a senior foreign policy fellow at the Foreign Policy Institute of the School of Advanced International Studies, Johns Hopkins University. Sadr’s relations with Maliki have often been characterized by tensions, especially after 2008, when Maliki, as prime minister, authorized Iraqi forces to move against the armed, pro-Sadr Jaish al-Mahdi in the oil-rich city of Basra and Baghdad suburb of Sadr City to curb in the group's armed activities.

Such a seemingly ill-measured move as joining a sit-in of mostly pro-Maliki parliamentarians is unlikely to harm Sadr’s standing with his supporters, who primarily revere him for the religious heritage he represents. “[The Sadrists'] involvement in the sit-in and their withdrawal were badly calculated. The good news for them is that their constituents will not hold them accountable. They never have,” Kadhim observed.

The storming of the Iraqi parliament by pro-Sadr protesters has angered many in Iraq’s polarized political landscape. They believe such actions can only contribute to destroying the space to try to arrive at political solutions in a country where armed conflict has long been a way of settling differences.

“We don’t think this is the way to bring about reforms. What they did was contributing to chaos,” said Muthana Amin, a Kurdish parliamentarian who managed to flee the protesters’ foray into the parliament building at the last minute. Some legislators, including a few Kurds, were harassed and beaten. Amin believes Sadr’s perceived encouragement of the attack on the parliament has actually backfired.

“I don’t think the Sadrists have taken over the scene,” Amin said. “You can say Sadr has the loudest voice in Iraq’s political arena today, but this does not mean he is the strongest political figure. If he were, he would be able to change things as he desired.”

Given his show of power and ability to gather tens of thousands of people on the street, some observers wonder if Sadr can bring about fundamental changes to Iraq’s political life. Many tend to think that given the divided nature of the political arena and often conflicting interests, there is a limit to what Sadr can achieve, including the power-broker status he appears to covet. On May 7, Sadr's arch political nemesis, Maliki, called for Al-Ahrar to be banned from politics.

“Sayyed Muqtada al-Sadr has a strong loyal following, which makes him one of the most powerful political leaders in Iraq. He is also in command of a unified political bloc in the Iraqi parliament, which he can steer in any direction he wants,” Kadhim said. “But his power is more a tool to obstruct, not to impose any political outcome, as we saw in the events of the last weeks.”