Shiite leader Muqtada al-Sadr is taking advantage of the current popular protests in Iraq to expand his influence and thus become an undisputable leader on the Iraqi political scene. 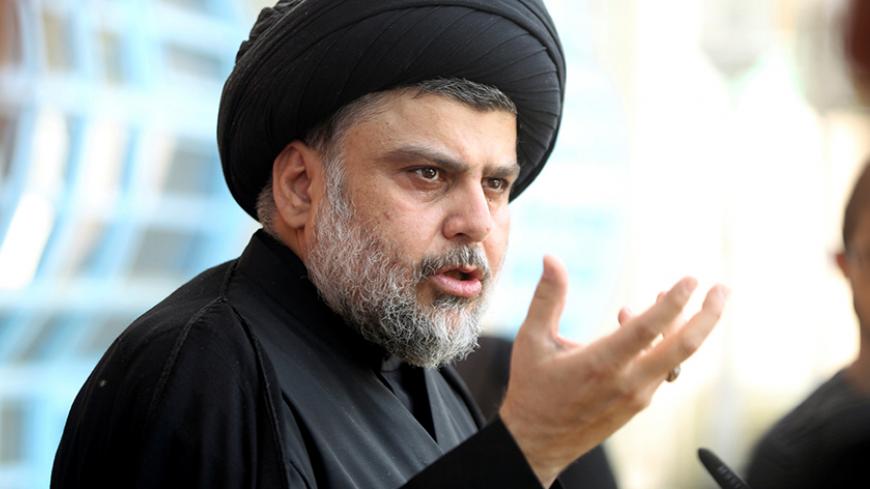 Muqtada al-Sadr played a prominent part in the memoirs of the US civil administrator of Iraq between 2003-2004, Paul Bremer, with the latter describing the former as difficult to decipher and not easy to deal with, when compared to other opponents of the United States in Iraq. And now, more than one decade later, Sadr remains the preeminent troublemaking political leader, whose unexpected decisions surprise his challengers and rivals alike.

Sadr enjoys widespread popularity among Shiites and hails from a religious family with great influence among the populace — a family that lost two great religious leaders killed by Saddam Hussein's regime, namely Muhammad Baqir al-Sadr (1935-1980) and Mohammad Sadiq al-Sadr (1943-1999). His lineage thus afforded him great social legitimacy, allowing him to wield extensive power that changed existing political equations in unexpected fashion, as he imposed his will on the overall political process.

Thanks to this legitimacy — and as a result of his political and social influence — Sadr skirted a 2003 arrest warrant issued in his regard by a judge in the Najaf court on charges of being involved in the assassination of prominent Shiite leader Sayyid Abdul-Majid al-Khoei on April 10, 2003. He also managed to avoid arrest by US occupation forces following his involvement in the killing of a number of troops belonging to these forces, following attacks by the armed resistance movement, Jaish al-Mahdi. US forces were unable to capture him, given his popularity in the Shiite street. He then moved to Iran and stayed there until 2011.

In addition, the Sadrist movement cast the winning vote in Nouri al-Maliki assuming the country’s premiership for two terms in 2006-2014, as Sadr supported Maliki against the candidates of other blocs of the Iraqi National Coalition, which was then tasked with nominating a prime minister. Later, Sadr played a leading role in preventing Maliki’s ascension to power for a third term in 2014.

In mid-2015, as the tempo of popular demonstrations rose in Shiite cities against state corruption and mismanagement, Sadr stood with demonstrators to call on the Iraqi government to reform. Meanwhile, the Sadrist movement that he leads had 34 lawmakers in Iraq’s 328 seat parliament, 43 seats out of a total of 440 local council seats, and three key professional and service portfolios in the current Cabinet, including the Ministry of Commerce, the Ministry of Municipalities, and the Ministry of Construction and Housing.

Ironically, the Sadrist movement was a main participant in corruption and a contributor in the failures that Sadr’s followers were demonstrating against with other protesters — he was part of the government while concurrently opposing said government.

But his adoption of the protest movement and the provision of political and security support therefore have overshadowed all of that. This situation afforded him larger popular support as a leader who opposes the government and garners respect from the Iraqi people regardless of their orientation, including secularists.

As the demands of protests matured and evolved, Sadr moved from calling for anti-corruption measures and the provisioning of services, to demanding the formation of a technocratic government. He thus relocated the protests to the gates of the Green Zone and personally led them, pitching a tent for himself among the throng of demonstrators on March 27.

In a symbolic move to express their loyalty, security forces tasked with protecting the Green Zone — including Gen. Mohammad Reza, the commander of the Green Zone Protection Brigade — headed to Sadr's tent to pledge their loyalty. Sadr and his supporters’ sit-ins continued until Iraq’s Prime Minister Haider al-Abadi acquiesced and submitted a technocratic Cabinet formation for adoption by parliament on March 31.

As parliament delayed voting on Abadi’s proposed Cabinet, Sadr called on his MPs to organize a sit-in inside parliament on April 12. In an attempt to circumvent Sadr’s move, lawmakers from the Maliki-led State of Law Coalition joined the protests, leading to their demands mutating to dismissing Speaker Salim al-Jabouri and demanding the sacking of the president and prime minister instead of backing Abadi’s efforts to push for the adoption of a technocratic Cabinet.

Subsequently, Sadr sabotaged Maliki’s attempts to order the withdrawal of his parliament members from the sit-in on April 20 and offered his support to the speaker, thus allowing Jabouri to resume his duties and continue deliberating Abadi’s proposed Cabinet.

Sadr was not satisfied with the partial April 26 parliamentary vote on a technocratic Cabinet of only six ministers, and he called on his supporters to storm the Green Zone and demonstrate inside parliament in order to pressure the government and parliament to vote on a complete Cabinet of technocrats. The protesters were met with open gates and warm welcomes from some of the forces tasked with protecting the Green Zone, where protesters remained for two days.

Yet despite the peaceful atmosphere that accompanied the storming of the Green Zone, a number of parliamentarians were beaten and cursed while Sadrist movement lawmakers were embraced and carried on the shoulders of protesters who raised slogans that included chants against the United States and Iran such as “Death to America” and “Iran out of Iraq,” calling on them to stop meddling in Iraqi affairs. The incident shocked Iraqi politicians, leading some analysts to characterize the event as “a de-facto coup.”

Sadr’s latest behavior seems to reflect the ambiguity and volatility of his political demands. The man mutated from a religious militia leader demanding the establishment of an Islamic rule to a reformist calling for a government of independent technocrats unaffiliated with any religious parties. In addition, his political conduct and the internal and external alliances that he entered into saw a great deal of change, for he went from allying himself with Maliki to deposing him and from a man exiled to Iran and backed by Tehran to a nationalistic leader who opposed Iran’s influence in Iraq.

In this sense, Sadr represents a great challenge to other influential political and religious forces in Iraq — justifying the description espoused by analysts in his regard as “the most dangerous man in Iraq” — due to his falling out with the traditional religious authority in Najaf, Ayatollah Ali Sistani, who contented himself with issuing general guidelines on Feb. 5, 2016, while refraining from directly interfering in political affairs. The criticism against Sadr was also due to his animosity toward the United States because of its capacity as the most influential foreign force in Iraq, as well as his opposition to Iran as the most influential regional force in Iraq.

Yet at the same time Sadr represents an opportunity for Abadi to effectuate balance with other political forces by exploiting Sadr’s popular protest movements, calling for the adoption of an independent Cabinet of technocrats that would lead to Abadi’s emancipation from the dominance of parties over his government through their ministers.

All of the foregoing demonstrates the existence of a high level of pragmatism in Sadr’s political conduct, allowing him to reinvent himself as a populist political and religious leader possessing an enormous level of political dynamism. This is while he continues to exploit the current protest movement to expand his sphere of influence, leading to him to becoming the undisputed leader on the Iraqi political scene.