Is Iran about to cut Muqtada al-Sadr loose?

While refraining from breaking with Muqtada al-Sadr and his rebellious followers, Iran is not fully embracing the Iraqi cleric either. 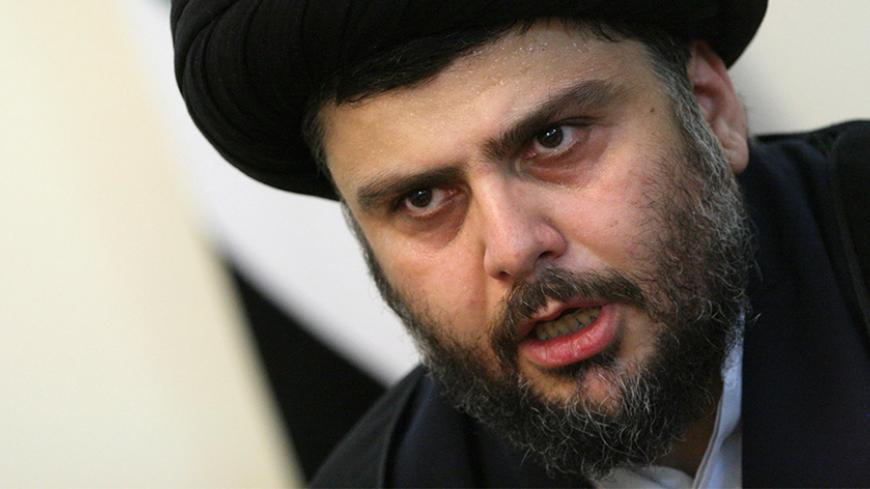 TEHRAN, Iran — The first chapter in the political life of Muqtada al-Sadr opened with the 2003 US-led invasion of Iraq and his armed resistance against foreign forces. In subsequent years, he gradually scaled back such activity and began to cooperate with the government of Prime Minister Nouri al-Maliki while continuing to insist that US troops withdraw from Iraq.

The next chapter began in August 2015, when Sadr rallied some 100,000 Iraqis in Baghdad's Tahrir Square in a protest against what he believed to be corruption and partisanship in the Cabinet of Prime Minister Haider al-Abadi, a clear sign of Sadr's return to the political scene. On Feb. 26, he again mobilized hundreds of thousands of Iraqis to take to the streets of Baghdad to protest against the incapability of the government to establish a nonpartisan and technocratic Cabinet.

A few weeks later, on March 18, Sadr and his supporters staged a sit-in outside the Green Zone, where government institutions, including the parliament, and foreign embassies are located. Sadr called the Green Zone a “bastion of support for corruption” and exhorted his supporters to continue sit-ins and strikes until the parliament and Abadi submit to their demand for political reform. Moreover, in a provocative speech on April 30, he tacitly encouraged his supporters to storm the parliament, which they proceeded to do. This means Abadi faces three main challenges: fighting the Islamic State (IS), implementing reforms and dealing with Sadr and his followers.

In general, to determine whether a political move is justifiable, useful or conventional, it should be assessed by criteria such as rationality, legitimacy, expediency and relative consensus of elites. As far as political rationality is concerned, it is obvious that to sow wind is to reap a whirlwind. By engaging in acts of sabotage and violence, such as storming the parliament, Sadr is provoking the other side, including the government, to take repressive actions against him. Such actions will create a cycle of chaos and disorder in Iraq and, as a result, everyone will suffer.

As far as legitimacy is concerned, it is again obvious that Abadi's government and Iraqi lawmakers — both elected through a democratic and lawful process — have a certain amount of appeal among most political groups in Iraq. Therefore, considering the rules of democracy, Abadi's administration as well as the parliament should be pressured through legal channels such as political parties, parliamentary factions and lobbying, rather than demonstrations, sit-in protests and storming the parliament.

There is no political expediency in Sadr’s actions either. He has chosen to rebel just as IS threatens the territorial integrity of Iraq, as Kurds are urged to secede by their leaders such as Massoud Barzani and as Saudi Arabia is fueling ethnic and religious conflict within Iraq. It would appear that Sadr has chosen the worst place and time for the sit-ins, strikes and blocking the normal activities of the Abadi government. More important, in terms of consensus he lacks the backing of main non-Sadrist parties, in addition to the fact that no prominent or reputable religious authorities or experts have voiced support for Sadr’s actions. Indeed, Grand Ayatollah Ali al-Sistani has on various occasions tacitly warned him against engaging in dangerous adventures.

Sadr can in many images over the years be seen seated next to key Iranian figures, showing that the Islamic Republic of Iran has not rejected the Iraqi cleric.

Right after the US-led invasion and Sadr's armed resistance against occupying forces, Tehran had morally and financially supported Sadr. Now, however, although Tehran has not condemned his actions, it hasn't supported them either. The Iranian Foreign Ministry spokesman, Hossein Jaber Ansari, reacted to rumors of Sadr’s visit to Iran in mid-May 2016 after his supporters had stormed the parliament by saying that the Iraqi cleric was not on an official visit and that “no official meeting has taken place between him and Iranian officials.” What this suggests is that Sadr perhaps decided to travel to Iran for personal reasons and that Tehran, seeking not to appear to legitimize his actions, did not arrange for official meetings between him and officials during his trip.

Ali Akbar Velayati, a foreign policy adviser to Iran's supreme leader, Ayatollah Ali Khamenei, was the only Iranian official to publicly react to the storming of the Iraqi parliament, stating that the people of Iraq will “resist” against “any threat to their security and rule of law” and will also “resist any group that engages in illegal activities.” To be clear, Velayati was indirectly alluding to Sadr's protests. Thus, it appears that Tehran does not seek to pursue an either-or approach toward Sadr and Abadi. In other words, the Iranians want to maintain ties with both Sadr and the Iraqi government.

On the one hand, Iran firmly supports Abadi’s administration. Indeed, Khamenei clearly stated to Abadi in October 2014, “We [Iran] stand with you and will support your administration as firmly as we supported the previous Iraqi administration.” Thus, Iran’s broader policy is to support the legitimate government of Iraq. At the same time, Iran knows full well that if it loses its influence over Sadr’s movement, the consequences will be unpredictable. Indeed, while Sadr was pursuing his political adventures in Baghdad, Quds Force commander Qassem Soleimani was in the command room near Fallujah during the operation to retake Fallujah, which Abadi had ordered.

Tehran knows that chaos in a neighboring state will have negative consequences for Iran, especially a neighbor that after years of hostility has now become its political ally. Therefore, its general policy is to support Abadi's government while also refraining from completely alienating rebellious groups sympathetic to Iran, such as Sadr and his followers.