Is the Islamic State fueling Shiite infighting in Iraq?

The Islamic State has adopted a new strategy that consists of provoking Shiite infighting, in a bid to distract attention of the Shiite majority government and Shiite opposition from liberating the remaining areas controlled by IS. 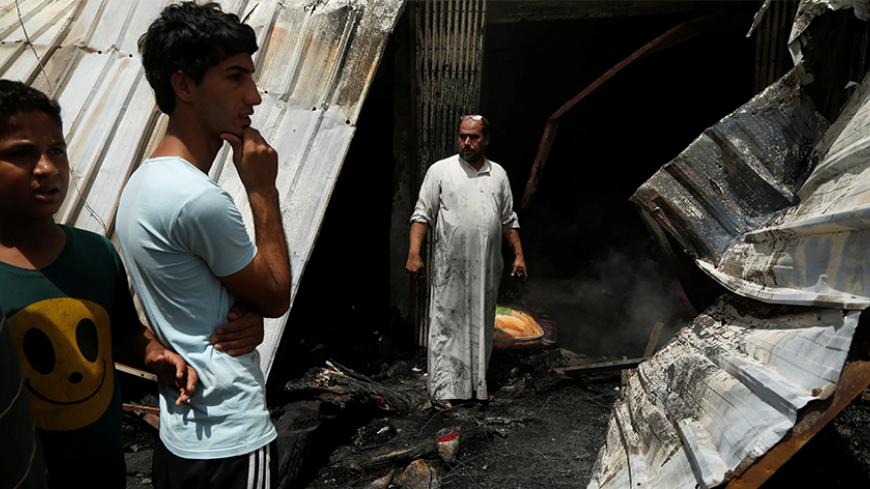 People gather at the scene of a car bomb attack in Baghdad's mainly Shiite district of Sadr City, May 11, 2016. - REUTERS/Wissm al-Okili

NAJAF, Iraq  — Sadr City in eastern Baghdad has been one of the main areas targeted by the Islamic State (IS) in the Iraqi capital. It is home to a Shiite majority loyal to Shiite cleric Muqtada al-Sadr, who has been leading an opposition movement against the Iraqi government since last year. That said, evidence shows that IS has been seeking to provoke Shiite infighting in a bid to delay the liberation of the remaining areas under its control.

Sadr City has been the stage for a spate of attacks this month. Baghdad was hit by three explosions May 11, the bloodiest of which took place in Sadr City, leaving 64 dead and 87 injured. On May 17, Sadr City was again rocked by a bomb attack that hit a crowded market and caused dozens of casualties. This series of bombings coincided with a political clash pitting Sadr, who enjoys large popularity in Sadr City, against the Iraqi government. The tension between these two led Sadr’s supporters, who came mostly from Sadr City, to storm the heavily fortified Green Zone on April 30 and May 1.

This confrontation, coupled by the explosions targeting Sadr City, are not new to the Iraqi scene. After Sadr said Feb. 13 that he would seek to withdraw trust from the Cabinet if it fails to implement reforms, twin explosions rocked a crowded market Feb. 28, killing at least 70 and wounding 100. IS claimed responsibility for all the attacks in February and May.

Tension among Shiite political parties reached new heights following the Sadr City bombings, stirring a political spat with each party blaming the other for what is happening. The February explosions followed a Sadrist escalation as Sadr called for his supporters to stage a sit-in outside the walls of the Green Zone.

On the same day as the May 11 bombings, Sadr released a searing statement holding Iraqi Interior Minister Mohammed Salem al-Ghabban fully responsible for the suicide attack, calling on Prime Minister Haider al-Abadi to “dismiss Ghabban immediately or else the people will find a way to deal with him on their own.”

On May 20, scores of protesters, most of whom came from Sadr City, stormed the Green Zone for the second time and broke into the Cabinet building in protest against the deteriorating security situation and government mismanagement. Security forces cracked down on protesters, firing rubber and live bullets and tear gas, leaving 108 wounded. Following this incident, Sadr released another statement, saying, “Terrorism and state violence conspired against Iraqis and unarmed protesters. While the first bombs them, the other targets them with live bullets and tear gas.”

Therefore, Sadr has put the Iraqi government and IS on the same side against his followers, who first fell victim to terrorist attacks in their hometown followed by the security forces' crackdown in the Green Zone.

In response, Abadi strongly condemned the protests, making the accusation, in a televised statement May 21, that “Baathist infiltrators allied with IS” were behind the Green Zone incident.

Abadi held that recent events were aimed at dragging the country into chaos and stirring up strife between the people and the government “in an attempt to save IS fighters who are being chased down everywhere.”

A security source who spoke to Al-Monitor on condition of anonymity said that operations to liberate Fallujah were delayed several times in May due to the escalation of protests that led to the invasion of the Green Zone and riots. The military operation in Fallujah was eventually launched May 23 following a relative calm in protests.

Terrorist groups now seek to target Shiites in particular to achieve two goals: to weaken the Shiite political presence and to galvanize Shiites against Sunnis in a bid to reinflame the sectarian conflict between the two.

Such groups benefit from sectarian violence, especially in terms of its larger effect on Sunnis and dragging them into an open war against Shiites. A voice recording released in February 2014 of Abu Musab al-Zarqawi, the founding father of IS, said, “If we succeed in dragging the [Shiites] into a sectarian war, it will be possible to mobilize all Sunnis, who would then feel threatened by an imminent genocide at the hands of Shiites.”

Any terrorist attack targeting an area with a Shiite majority loyal to the anti-government Sadr likely will spark further demonstrations and plunge both parties into violence.

From the IS perspective, the infighting would distract Shiites from focusing all their efforts on defeating IS in its remaining areas of control, especially Fallujah and Mosul.

That said, both parties — the government and the protesters — must practice the highest level of self-control, and refrain from being dragged into internal fighting that will only benefit IS and help it resist and live to see another day.