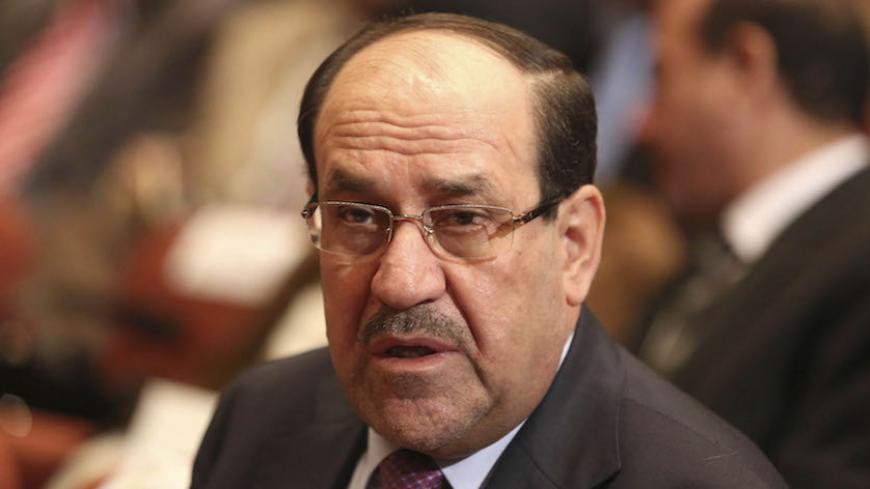 NAJAF, Iraq — Islamist parties have dominated the Iraqi political scene since the first elections in 2005 after the fall of Saddam Hussein. As a reaction to their long history of being repressed under Saddam's regime — a repression that included leftist and liberal currents — those parties gained more support. The Islamist parties’ failure in managing the country has given a boost to secular and civil currents, and the Iraqi street is currently witnessing a significant growth of these currents through the protests that have been going on since last year.

As Islamist parties now fear losing their electoral support on the Iraqi street, they are trying to move closer to the civil currents by adopting their rhetoric and protests, and by trying to scare the citizens away from the secularists.

Some Islamist parties, such as the Islamic Dawa Party, have accused the secularists of intending to destroy religion in Iraqi society. In his speech April 9 in Babil province, head of the Dawa Party Nouri al-Maliki said that the goal of the ongoing protests is not reform, but "targeting the Islamist project and Islam itself." He added, "They are saying that Islamists must leave their government positions and go to their mosques and Husseiniyas [Shiite houses of worship]."

Maliki’s speech came in response to recent demands to form a government of technocrats instead of the current sectarian and partisan quota system. Maliki expressed his concern about the demands that would overthrow the Islamist parties in favor of secular technocratic figures, saying, "When we talk about forming a government, they talk about technocrats. They say that independents should lead the country, but aren’t there Islamists who are technocrats and hold advanced degrees and are professionals? In fact, we have got more [of them]!”

It seems that Maliki is dealing with the current events by trying to scare the citizens away from the secularists and his Islamist rivals who are sympathetic to the reform project put forward by the secularists.

While the secular currents are the ones that proposed a technocratic government, now the current prime minister, Haider al-Abadi, has adopted it.

Abadi, who belongs to the Islamic Dawa Party, became prime minister by competing with Maliki. This resulted in a conflict between the two, creating two camps within the Dawa Party. As prime minister, Abadi has moved closer to the secularists than to the Islamists; he has obtained the support of Muqtada al-Sadr's Islamist current, which supports the idea of ​​a technocratic government.

Sadr has called for demonstrations in front of the Green Zone, and he has joined the protests there to support a technocratic government.

In his April 9 speech, Maliki referred to the rapprochement between some Islamists and secularists, saying in a regretful tone that the secularists have found others to echo their “technocrat” argument. These Islamists then grew frightened that the vision to hand over state matters to independent technocrats would be realized.

He said, "If the conspiracy to hand over the state matters to independent technocrats, then Islam and the Islamist project will be targeted.”

Yet the country’s situation is significantly volatile. After Abadi put forward his list of technocratic candidates, a number of Islamist parties, including the Islamic Virtue Party, directed several accusations at the candidates, including that some of them were Baathists or Salafists, and that, in the end, they are unfit to take ministerial posts.

Objections to the technocrat list led to an internal consensus among a number of Islamist parties — including the Badr bloc, the Islamic Supreme Council of Iraq and the National Forces Alliance — to put forward a new list of ministers on the basis of partisan quotas among themselves.

After the new agreement was announced, the members of parliament of the State of Law Coalition, which is led by Maliki, and other parliamentarians held a sit-in in parliament, demanding the dismissal of Masum, Jabouri and Abadi, in preparation for a new agreement among parliamentary blocs to ensure the coalition a share in the next government.

It is clear that Maliki is defending the so-called Islamist project to preserve the influence and power of his parliamentary bloc in the government and to prevent the rise of rivals, whether or not they are secular. Throughout the governments of Maliki and his successor Abadi, Iraq has been managed in a way that no one would call an “Islamist project” in the face of a secular project.

The only common feature among those governments was failure. This is what the Shiite authority in Najaf, Ali al-Sistani, has realized. Sistani subsequently withheld his support from all Islamist parties, and the Dawa Party in particular. He criticized these parties and blamed them for the country’s deteriorating security situation and financial crisis.

In fact, the relationship between Sistani and Maliki has been strained since the end of 2010, when Maliki began his second term. The Shiite authority has declined to meet Maliki since then, harshly criticized him and clearly worked to prevent him from getting a third term in office.

The Islamist parties are witnessing a major crisis. They have lost the support of the religious establishment and are facing a popular protest movement opposing them, with some of the protesters being Islamist themselves. Thus, these parties are suffering from diminished religious and popular legitimacy, indicating the possibility that a secular discourse may soon emerge to rival that of the Islamist parties.