Will Abadi resign from his party?

Iraqi Prime Minister Haider al-Abadi wants to form a Cabinet of nonpartisan technocrats, but his critics are pressing him to first leave the Islamic Dawa Party. 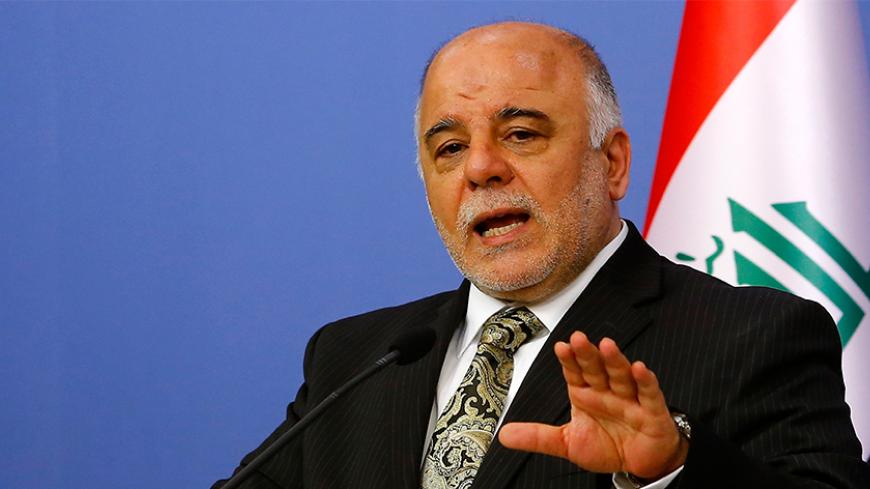 BAGHDAD, Iraq — Iraqi Prime Minister Haider al-Abadi is seeking to form a government of independent technocrats away from the quotas system, the political process that Iraq has grown accustomed to over the past 13 years. Under the system, the political positions are divided according to the quotas distributed among the main components of the country — Sunnis, Shiites and Kurds. However, the steps that the prime minister is taking in forming the government of independent technocrats has faced obstacles, most notably political and popular demands for him to leave the Islamic Dawa Party with which he is affiliated.

Abadi became prime minister of Iraq on Aug. 11, 2014, when President Fuad Masum assigned him to form a government, after the Iraqi political blocs refused to grant his predecessor, Nouri al-Maliki, a chance to get a third term, forcing him to waive his third term in favor of his fellow party member, Abadi.

On March 2, Hanan al-Fatlawi, member of parliament (MP) and head of the Irada block — an independent block that has no governmental position and only one parliamentary seat — demanded that Abadi, her former colleague in the State of Law coalition, should either resign from his position as head of the government or declare a state of emergency and ask the parliament to vote on it.

Meanwhile, MP for the Kurdish Change bloc, MP Risan Sheikh, told Al-Monitor, "Abadi intends to form a government of technocrats, and this is a positive step toward reform, but it is difficult for Abadi to head this government as long as he insists on remaining affiliated with the Dawa Party. This is a fallacy and a negative point against the democratic political process."

She also said, "Abadi has to abandon his party for his presiding over a technocrat government to be convincing and positive; he cannot have partisan affiliations and look for independent ministers. It is necessary to withdraw the vote of confidence from Abadi and elect someone who is strong and capable of putting an end to the quotas system in the country and saving it from the crises that plague it.”

Against this background, protesters organized a demonstration at Tahrir Square in Baghdad and called on Abadi to become independent and announce his resignation from the Dawa Party.

One of the protesters at Tahrir Square, Suad Ali, told Al-Monitor, “Iraqis are protesting to demand Abadi to resign from the Dawa Party and to set an example for a government of independent technocrats. If he stays affiliated with the party, I do not see how he could be able to positively head the government or even obtain political and popular support. A technocratic government should be headed by a person who has no affiliation with any party. His sense of belonging and loyalty should only be to Iraq so that he can [properly] serve the Iraqi people.”

In a press conference held at the parliament on March 2, a number of MPs for the National Alliance called on Abadi to resign from his party as part of the reforms that he wants to carry out.

MP Ali al-Badri, who participated in the press conference, said, "Public opinion is being misled when it comes to the reforms that are going to save the country from destruction and corruption just by changing ministers. Some blocs want a partial Cabinet reshuffle while others want a technocratic Cabinet."

He noted, "The major issue in the country is not only the ministers, but also the undersecretaries and general managers in the ministries, who are subject to the quotas system," adding, "Even if the prime minister brought ministers as wise as prophets, the competent parliamentary committees are the ones that monitor their work; how can a minister work with a monitoring committee that follows the quotas system?"

Badri stressed the importance of "a reform program that is built on solid foundations and not only based on the Cabinet reshuffle. The program must start with the prime minister himself; he should abandon his party and show Iraq that he is a prime minister for all Iraqis."

Ihsan al-Shammari, a political analyst and head of the think tank Iraqi Centre for Political Thought, told Al-Monitor, "The demand made by the political powers for Abadi to submit his resignation from the Dawa Party bears a political dimension, which is part of the obstacles impeding the reform project that he put forward and which targeted the center of influence of leaders and political parties, prompting them to find obstacles for this shift toward the use of [competent personnel] in the management of the state and its institutions."

He added, “There is a constitutional cover for [Abadi] to remain within the scope of the political system; Article 78 of the Iraqi Constitution points out that the president shall assign the candidate of the largest parliamentary bloc, and the constitution does not state that the prime minister shall be independent or be obliged to choose the ministers of any title, whether they are independent or technocrats.”

Shammari stressed that “the demands for Abadi to resign from his party are part of the struggle and political revenge between parties that do not want to leave the partisan, sectarian and nationalistic quotas system and are still holding onto the power and its luster.”

Perhaps those demanding Abadi to resign from the Dawa Party will not stop here; they might even demand him to resign from his position as prime minister or even call on the parliament to withdraw the vote of confidence, should he insist on staying affiliated with his party. However, Abadi might be surprised by a step similar to the one that surprised parliament Speaker Salim al-Jabouri on April 14, when about 171 MPs staged a sit-in at the parliament building and voted to dismiss him and his two MPs Humam Hamoudi and Aram Al-Sheikh Ali.

The political crisis in Iraq has affected the entire political system, which is still searching for a way out. This comes amid disputes that cannot easily be resolved, especially after an angry public has already taken a stance.