Party squabbles have Iraqi PM by the coattails

A Cabinet shuffle by Prime Minister Haider al-Abadi is unlikely to assuage protesters demanding substantive government reform and the removal of corrupt officials. 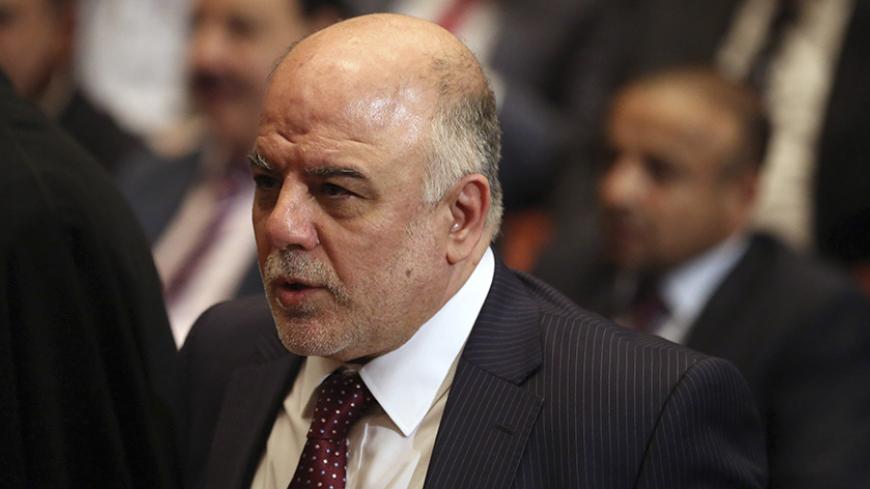 BAGHDAD — A Cabinet shuffle that Iraqi Prime Minister Haider al-Abadi is expected to make will be limited to the substitution of ministers with representatives from their own parliamentary bloc or other blocs having a higher number of seats. That is, it will not take into account demands by protesters geared toward reducing government waste, inefficiency and corruption and forming a technocratic Cabinet.

Abadi had announced a package of reforms in August, including dismissals of the prime minister’s deputies and vice presidents as well as 140 senior government officials and the elimination and merger of 10 ministries. In early 2016, Iraqi media had reported an imminent reduction in the number of Cabinet seats and high-profile Cabinet dismissals, but on Jan. 25, Abadi confirmed that a shuffle would be limited to ministerial changes and exclude the elimination or merger of ministries. Abadi's announcement angered the Iraqi street, particularly the Popular Movement, which had hoped that protests ongoing since last August — the most recent of which was held Jan. 29 in Baghdad — would result in holding corrupt officials accountable, abolishing unnecessary positions and forming a Cabinet of competent ministers without regard to sectarian quotas.

Mohammed al-Sayhoud, a Shiite parliamentarian for the State of Law Coalition, with which Abadi is affiliated, said of government reform in general, “It is not only about the abolition of posts and merger of ministries, but also the shift of some officials in a way that goes in line with the attempts to improve government performance and fight corrupt officials.” He further explained to Al-Monitor, “There is a need to replace some ministers and merge ministries, such as merging the oil and electricity ministries in order to end the problems between them, as each has been pointing at the other for years, and to resolve the chronically poor electrical service.”

Sayhoud also asserted, “The abolition of the Environment Ministry by merging it into the Health Ministry was a major mistake. The same applies to the abolition of the Tourism Ministry, which is one of the most important departments, as it provides huge funds to the state budget. Contrary to what happened, we had wished it would be developed and taken care of.”

According to Sayhoud, partisan and sectarian quotas are hampering Abadi’s ability to exploit the support of Grand Ayatollah Ali al-Sistani and the protesters for the formation of a technocratic government. The political blocs are hesitant to relinquish any posts and reject the nomination of technocrats from other blocs. Sayhoud also said, “The technical committee charged with the assessment of government performance has not yet completed its task. The [State of Law] Coalition will demand in parliament that the [committee’s] report results be revealed to learn about the recommendations and whether or not the Cabinet reshuffle will be a part of the reform process.”

Sayhoud further stated, “[My bloc will suggest the] formation of a technocratic government even though candidates are affiliated with the same bloc before Abadi announces the Cabinet reshuffle that he promised.”

A follow-up on the government reshuffle in 2014 revealed that a number of blocs were not satisfied with the way the ministries were distributed. For instance, Sunni and Shiite blocs rejected the nomination of the leader of the Badr Organization, Hadi al-Amiri, to be interior minister and the nomination of the head of the Badr parliamentary bloc, Qasim al-Araji, for the same post, which forced Amiri to nominate the current office holder, Mohammed al-Ghabban. The Solution (al-Hall) bloc, led by Jamal Karbouli, rejected Qasim Fahdawi, head of the Anbar Loyalty Coalition, to oversee the Electricity Ministry. Hussain al-Shahristani, head of the Independents Bloc, refused appointment as education minister.

According to media reports, Araji will now be appointed interior minister, Shahristani foreign minister, and Mohammed Karbouli (Jamal Karbouli’s brother and a former minister of industry) minister of trade and electricity.

“It is too late for real government reform, as the popular and religious support that Grand Ayatollah Ali al-Sistani has provided to Abadi has reached its lowest level,” Abdul Rahman al-Luwaizi of the Sunni National Forces Alliance asserted to Al-Monitor. “The fact that some blocs are not content with the current government formation and are demanding that they be assigned certain portfolios is what prompted Abadi to move toward the Cabinet reshuffle that he announced. There is no other reason.”

Luwaizi said that his bloc had agreed on the Cabinet shuffle but was still holding talks with Abadi on ministerial changes. Luwaizi also expressed his concern about Iraqis being dissatisfied with the shuffle. He observed, “[It is likely that] popular discontent at the government increases, in light of the worsening financial, security and political crises.”

Some protest organizers believe that Abadi is moving away from promised reforms, and any steps he takes will be useless or absurd if no real change is brought about to the country’s situation. “Abadi has disappointed the protesters and did not introduce any real reforms. He is only throwing dust in our eyes,” Jassem Hilfi, a member of the Baghdad protest coordinating committee, told Al-Monitor. “The protests are demanding the formation of a government without consideration of the sectarian quota system, reducing the number of ministries and positions in the government, fighting financial and administrative corruption in the country and calling for the provision of services and reform in the judiciary.”

Hilfi further stressed, “Demonstrations will escalate, although they have calmed down in the past weeks, especially if Abadi only resorts to a change of government figures. The worsening financial crisis, the ongoing political differences as summer approaches, the worsening electricity crisis that ignited popular protests and other problems will lead to unprecedented protests that will end with the overthrow of corrupt figures inside and outside the government.”

It appears that Abadi remains unable to respond to the protesters' demands and thus continues to lose whatever public and religious support he has left. This makes him vulnerable to the possibility of losing the people’s trust and being replaced by another candidate acceptable to Shiite parties, some of which opposed Abadi's nomination to head the government, namely, the State of Law Coalition supporters of former Prime Minister Nuri al-Maliki.