Without reforms, protests threaten to escalate in Iraq

Shiite cleric Muqtada al-Sadr led massive protests in Baghdad last week, and demonstrations are likely to continue until progress is made on the government reforms he demands. 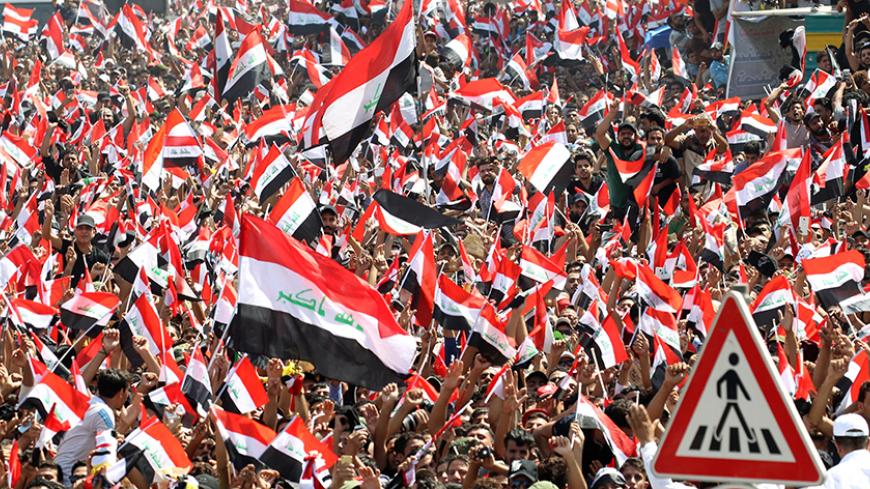 BAGHDAD — Thousands of supporters of Shiite cleric Muqtada al-Sadr and the civil movement in Baghdad returned to the streets recently to protest delays in reforming a government they say is corrupt and unable to protect its people.

All political channels for reform seem to have reached a dead end in light of the continuing division among political blocs in parliament. During the massive protest July 15 in Tahrir (Liberation) Square in the Iraqi capital, Sadr urged demonstrators to keep protesting until their demands are met.

He called for dismissing all corrupt state officials and those with special privileges, warning that this also applies to the president, prime minister and parliament speaker if they breach their duties and fail to meet reform demands. This is also the objective sought by the parliamentary opposition bloc, the Reform Front.

“The corrupt must be subject to fair trial as soon as possible; otherwise, the people will prosecute them,” Sadr said.

He called for ending ethnic, sectarian and partisan quotas for government positions and forming an independent government of technocrats, insisting that members of the Supreme Electoral Commission resign so they can be replaced by competent, honest and professional members without using the political quota system.

Sadr said parliament must vote on serious reforms demanded by the public, provided the voting sessions are open and broadcast directly by the media to the Iraqi people. He also urged the Iraqi judiciary not to be influenced by political pressure and to work with total impartiality and independence.

Majid al-Ghraoui, a member of the Sadr-affiliated Al-Ahrar parliament bloc, told Al-Monitor, “The Sadrist movement protests will force the parliament to implement reforms, most notably the formation of a technocrat government. We are not relying merely on political work within the parliament.”

After a two-month break, Iraq's parliament sessions resumed July 12 in the presence of only 180 of 328 members. Ghraoui, referring to the Al-Ahrar bloc’s boycott of the sessions, said, “Al-Ahrar bloc will only attend the sessions held for the ratification of important laws related to reforms or the questioning of corrupt [officials].”

On the relationship between the Al-Ahrar bloc and the Reform Front, Ghraoui said, “There are contacts with a number of Reform Front [parliamentarians], and we are working with them to form a parliamentary opposition bloc if the situation remains unchanged and if the reform demands are not met.”

He added, however, “We refuse to ally with some members of parliament from the State of Law Coalition led by former Prime Minister Nouri al-Maliki ... since they seek to bring Maliki back to power.”

In a BBC interview July 3, Maliki expressed his desire to head the government again if there is a political consensus on his nomination by whichever coalition forms the majority in parliament. In a July 18 interview with NRT, Maliki said that he considers the Sadrists’ July 15 protest a failure and that any threat posed by Sadr to the state’s stability has passed.

Al-Ghad Press, which is close to Maliki, quoted him July 15 as saying, “The protests have lost momentum, as the Sadrist movement supporters have realized the seriousness of the situation in the country. A conspiracy is being woven by Baathists and Wahhabist malevolent parties trying to exploit the protests.”

Maliki's dismissal of the movement and his allegation of a conspiracy raised the ire of the Sadrist and civilian organizers of the protests. Jassem Hilfi, a member of the Baghdad protest coordinating committee, told Al-Monitor, “Protests are a right guaranteed by the constitution and we will not back down until we achieve the reforms.” He added, “Attempts to undermine the protests by using security means or claiming that foreign conspiracies are behind these protests are unacceptable and will only give the protests more momentum. The majority of the political class is trying to keep things as they are; this is why it fears popular protests.”

On July 14, a day before the protest, the Iraqi army organized a military parade in Tahrir Square, the same place the Sadrist protests are held. The army had never before held a military parade outside Celebration Square in the Green Zone, so this one might be interpreted as a show of force by the government to intimidate Sadr and his supporters.

Sadr's followers had previously broken into the Green Zone, which houses the government, parliament, and Arab and other foreign embassies, most notably that of the United States. Those incursions took place April 30, when Sadrist protesters stormed the parliament building, and May 20, when they stormed the Council of Ministers building.

Despite Maliki's predictions, it appears the Sadrist movement’s protests are not likely to stop until its reform demands are met. Some worry this could herald armed confrontations that might lead to the intervention of the military wing of the Sadrist movement, the Saraya al-Salam (Peace Brigades). In the worst-case scenario, the brigades could clash with the security forces and perhaps Popular Mobilization Units factions loyal to Maliki.

Inside the parliament, the large opposition bloc that Sadr seeks to form is not likely to include members of Maliki's State of Law Coalition, who are also seeking to form an opposition bloc. However, if they don't work together, parliamentary divisions could be exacerbated, preventing the formation of a majority capable of achieving political change and reform.