When their tents were burned, Iraqi protesters replaced them with concrete structures. And when influential cleric Muqtada al-Sadr withdrew his support, even more protesters turned out despite fears of a crackdown by security forces. 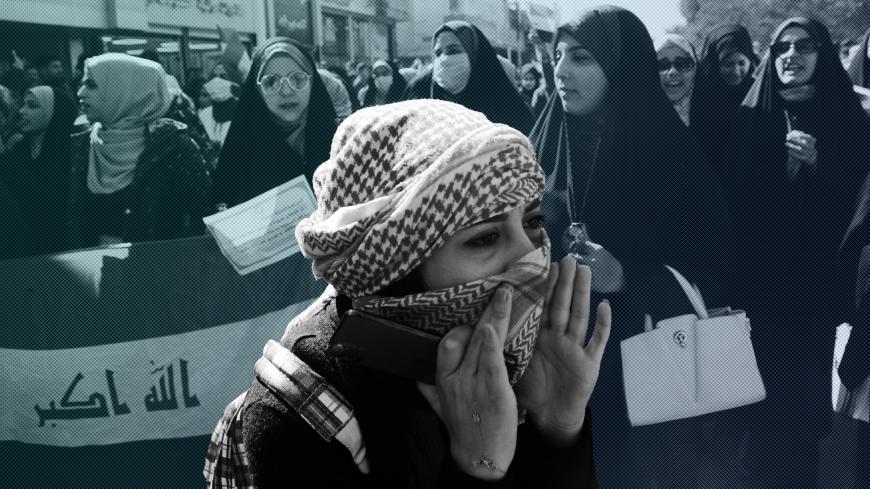 After withdrawing his support for the protests, controversial populist Shiite cleric Muqtada al-Sadr ordered his followers back to Tahrir Square Feb. 1, where his supporters clashed with demonstrators and forcibly took over the main part of Tahrir Square as well as the Turkish Restaurant that has been under control of the protesters.

The nomination of Mohammed Tawfiq Allawi as the new Iraqi prime minister was simultaneously received negatively by the protesters, who see his appointment as a plot by Sadr and his Iran-backed allies in the government to end the protests in Baghdad.

Allawi is a candidate of Sadr's Sairoon Alliance and Hadi al-Amiri's Fatah Alliance. The parliament needs to hold a session to vote on the new prime minister.

The Sadrist group is now cooperating with the security forces to end the sit-in at Tahrir Square.

The breakup between Sadr and the protesters began Jan. 26, when Sadr ordered his followers to leave the protests. Sadrists were packing their belongings in accordance with their leader's command and preparing to leave. However, thousands of Iraqis — especially students — facing live gunfire and defying the powerful cleric’s call to stay home flocked to the capital and to the streets of other cities.

While Sadr’s devoted followers packed up their tents in Tahrir Square — Baghdad’s main protest point — protesters denied rumors that the four-month-long anti-government uprising would immediately collapse without his backing.

“After his decision to withdraw from the protests, Sadr’s popularity seems to be partially declining,” Karrar Ahmed, a protester from Najaf, told Al-Monitor. Ahmed added, “Protesters in the squares rejected him, crossing all red lines. Before, it was impossible to hear chants against him.”

He said protesters who left were soon replaced by others.

“Their withdrawal did not affect us. The momentum has actually increased. We installed new tents after the Sadrists removed theirs,” said Ahmed.

Late Jan. 24, Sadr said he would stand neutral amid ongoing anti-government protests. In his statement, Sadr expressed regret for those among the demonstrators who questioned him in Baghdad and other provinces. He tweeted, “I was their supporter … and I thought of them as supporters for me and Iraq. However, from now on I will try not to interfere with them, negatively or positively, until they take into account the fate of Iraq and its imminent danger.”

"[In December], independent protesters began to gradually withdraw from the square because Sadr's followers tried to control the protests … tried to silence other voices and impose their opinion. The recent withdrawal led independent people to return back strongly,” he said.

However, observers say the withdrawal resulted in a rapid crackdown as riot police raided the sit-ins in Baghdad and set tents on fire in southern cities Jan. 25, killing at least 10.

“Sadr's decision to pull his support had an immediate effect on the peaceful protests,” said Minatullah al-Obaidi, a graduate of The American University of Iraq in Sulaimaniyah with a master's degree in contemporary Arab studies from Georgetown University's Walsh School of Foreign Service. “Soon after, there were news reports of tents being set on fire in Basra and Nasiriyah.”

Determined protesters began replacing burned tents with concrete accommodations in Nasiriyah, said Obaidi. “The protesters persist despite Sadr's withdrawal,” she told Al-Monitor. “Some say the Sadrists are no longer a homogenous group and are mostly influenced by the polarization of Iraq's Shia society,” Obaidi said.

Others see this as a new hope for the protests, whose momentum initially declined after a US drone strike killed Iranian Maj. Gen. Qasem Soleimani Jan. 3 at Baghdad's airport.

“All those who reject the Sadrist movement and Islamic parties feel satisfied now, as the sit-ins are now purely Iraqi with no foreign loyalties,” said Salam Abdul-Hussein, a petroleum engineer from Diwaniyah. He added, “We reject the Iranian hegemony and call on the international community to protect us from the militias' oppression. All Iraqis, especially the younger generation, have become aware of Iran and Sadr's mutual goals to end these protests by any means.”

Sadr's decision came a day after tens of thousands of his supporters crowded Baghdad's Jadriya neighborhood Jan. 24, calling for the expulsion of US forces from Iraq. The march lasted a few hours and came in response to the killing of Soleimani and Iraqi Popular Mobilization Units chief Abu Mahdi al-Muhandis.

“Sadr frequently tested his supporters, asking them to go out protesting against the government and corruption — though he led the largest bloc in parliament. People are tired of this,” said Khairuldeen Makhzoomi, a Washington-based Iraqi-American analyst and graduate of Georgetown University's Center for Contemporary Arab Studies. He added, “He will lose a fair minority of his base supporters. He also called for the removal of US forces from Iraq, though we all know that all the bases are Iraqi.”

Ali Bashar, a political science instructor at Bayan University in Erbil, thinks Sadr’s withdrawal from the protests might be temporary.

“He might change his mind and call his followers to rejoin the protests at any moment,” Bashar told Al-Monitor, adding, “He moves from the far right to the far left suddenly. There is no method to predict his decisions.”

Sadr’s supporters reportedly helped protect protesters from attacks by security forces, and their withdrawal left many concerned about the fate of the protests.

“His followers, namely the Peace Brigades, were protecting Tahrir Square's entrances and exits,” said Barbouti, who began attending the protests Oct. 1. He added, “Their withdrawal left the square vulnerable and the militias began raiding us daily, in addition to the riot forces' attacks. However, our courageous young men helped repel the attacks.”

Obaidi is suspicious of Sadr’s motivation. “If he was really [trying to protect protesters], then he certainly wasn't doing a great job at that. Over 600 people have been killed so far, and the numbers keep going up,” she said.

Ahmed agrees with Obaidi. “Everyone says he was protecting us. He was protecting his interests and popularity," as he has done before. Ahmed added, "He wanted to be the [protest] leader in spite of our rejection. Then he ordered his followers to withdraw."

He said, “There were countless threats against anyone who might utter a word against [Sadr]. Once, I chanted against him in a march until a Sadrist quarreled with me and silenced me."

Obaidi also thinks some Sadrists no longer support him. “Many of them joined the protests early on and have been influenced by the nationalist sentiment and progressive ideas of liberal protesters,” she said. “Sadr also uses double standards to [appear] neutral, yet his actions prove he sides with Iran — labeling influencers, like comedian [Ahmed] Albasheer, jokers" and saying they support the US agenda, Obaidi stated.

Bashar fears that some corrupt factions of the government might draw protesters into violent clashes with security forces.

“If the corrupt groups see the protests as a major threat to their interests, they might do their best to turn them violent. The government is embarrassed because of the protesters' peacefulness. Three parties prevent the use of brutality against the [protesters]: the Shiite religious authorities in Najaf, tribes and Sadr,” he said.

Abdul-Hussein seems determined to continue the protests for long-term gains. He said, "A strong escalation is coming, accompanied by repression by government authorities and militias. We will fulfill many of our demands that will change the reality of Iraqi citizens for the better.”