Nasiriyah has become the new capital of Iraq's protests after Sadrists in Baghdad cracked down on Tahrir Square, which was the center of protests since they began in October 2019. 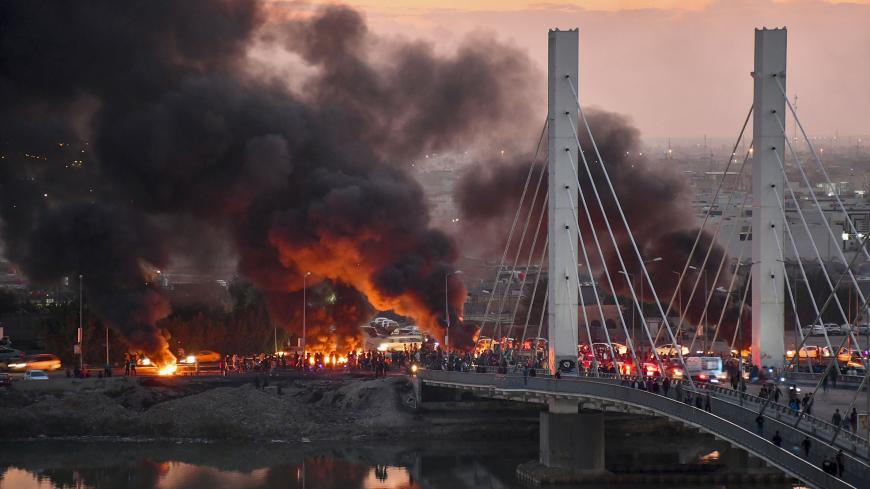 Protesters in Iraq have changed the venue of their protests from Baghdad to Nasiriyah in Dhi Qar province, 360 kilometers (223 miles) south of the Iraqi capital. Decisions on the revolution will now be made in Nasiriyah.

Protests are held almost in all Iraqi southern cities, but Baghdad was the center of the protests movement, where all other protests follow its direction and guidance.

Dhi Qar province is second after Baghdad in the highest number of abuses against protesters since the protests began Oct. 1, 2019. Protesters there have been subject to violence by security forces. The only difference between it and Baghdad is that armed groups have not intervened.

One of the factors that made Nasiriyah an ideal protest capital is the support shown by tribal and popular forces as well as the strength of its people in standing against violence.

The two most prominent figures of the protests in Nasiriyah are pharmacist Alaa al-Rikabi, who presented his candidacy for the transitional government in Iraq, and Asaad al-Nasiri, a leader in Sadr's movement who was blocked by Sadr Jan. 25.

Nasiri tweeted, “There are many causes behind decentralizing the protests and moving them to Nasiriyah. One of the main reasons is the weak situation of protesters in Baghdad compared to the authorities and armed groups. We observed how the Blue Hats of Sadr’s movement took over the streets.”

He added, “The popular movement in Nasiriyah, the ban on the intervention of armed groups, the improvement of the relationship between protesters and security forces, and the coverage the issue is receiving in local and international media are positive signs. They reveal our strength and our great responsibility to defend human rights.”

On Feb. 2, protesters from Tahrir Square sent a signed letter to those in Nasiriyah that said, “Nasiriyah is the capital of protests in Iraq.” They justified this move by saying they were pressured by parties they couldn’t name after their refusal to assign Mohammed Tawfik Allawi as prime minister.

Protesters in Tahrir Square have faced ongoing attacks over the past weeks; some of those attacks — like the burning of their tents — were perpetrated by Sadr’s Blue Hats.” For this reason, protesters in Baghdad and Tahrir Square made Nasiriyah the new focal point of the protests in order to take some pressure off of the ones in Baghdad. Dhi Qar, the third poorest province in Iraq with a 44% poverty rate according to the Iraqi Ministry of Planning, played an important role in promoting protests and their momentum in Iraq.

The cooperation between tribes and activists in the protests has played an important role in pressuring former Prime Minister Adel Abdul Mahdi into firing the head of the crisis unit, Maj. Jaleel al-Shammari. The latter was sent to Nasiriyah last November and given instructions to fire live bullets at protesters.

Huda al-Bahadli, a consultant with the National Wisdom Movement, told Al-Monitor, “I don’t think that moving protests to Nasiriyah was a surprise. It emanated from protesters’ search for a safe haven that guarantees the continuity of protests and their momentum as long as the government and political parties did not fulfill their demands.”

He added, “Nasiriyah has greater operational power than other regions where clear leadership has not formed. It has previously made proposals that have been accepted by all provinces.”

Dhi Qar province has remained the most prominent since the start of protests. There, the houses of politicians have been burned and the headquarters of parties have been destroyed, even those related to the Popular Mobilization Units (PMU). Last January, the international road connecting Basra to Baghdad and the north of Iraq was blocked.

An activist in the Nasiriyah protests, Hussein al-Gharabi, told Al-Monitor, “I think that what Nasiriyah went through during the November revolution was different from other locations. The voices of its youth were strong; so was their oppression. It thus became a symbol of protests. Al-Haboubi Square was also a space for independent youth. Unlike in Bagdad, Sadr’s movement and the Blue Hats were not there.”

He added, “The fact that political parties did not participate is what made it special and different from all provinces.”

In other provinces, the tents of protesters are being attacked and burned down. Protesters in Al-Haboubi Square built brick or wooden rooms to protect themselves from attacks. This escalation was a response to the government’s and Sadr's violence against protesters.

Naming Nasiriyah the capital of the protests in Iraq is a smart move. What the armed troops are doing in Baghdad, they cannot do in Dhi Qar province, where tribes are very present and cohesive. Moreover, most troops of the PMU who fought the Islamic State are from this city.

Now that Nasiriyah is the pillar of protests in Iraq, the momentum of protests will increase and create anxiety for authorities and parties. The province is known for its strength in fighting the government, and it is one of the areas where the popular movement against Saddam Hussein started in 1991.