Who are Sadr's Blue Hats in Iraq and what side are they on? 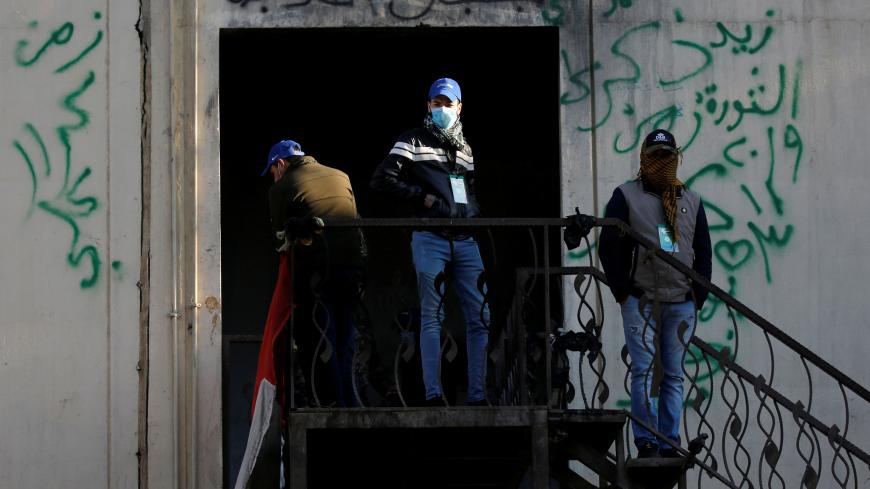 In the face of harsh criticism from religious authorities and the Iraqi public, cleric Muqtada al-Sadr called on his followers to retreat Feb. 8 from protests where they had clashed with anti-government demonstrators.

Sadr leads the Sadrist political current in Iraq and a group of followers among them called "Blue Hats.”

The outspoken, influential Shiite cleric's sentiments change frequently. He formed the Blue Hats in October in support of the public protests against the government. Soon, Blue Hats filled Tahrir Square in central Baghdad with an initial directive to protect protesters. But Sadr withdrew his support, and his followers, from the protests in late January. Within a week, however, he sent his followers back out, this time to subdue the protests.

Recently, Sadr recalled them again, but not before they allegedly killed protesters in Najaf.

The Blue Hats raided a Najaf protest center Feb. 5, where initial reports said at least eight people were killed and 20 wounded. (Medical personnel later said 23 protesters were killed and 197 wounded, but those figures have not been confirmed.) The Blue Hats also had deployed against protesters Feb. 6 in Tahrir Square in central Baghdad. Sadr's call that time came soon after he publicly announced he would endorse Iraqi Prime Minister-designate Mohammed Tawfiq Allawi, whom the protesters reject as being under Iranian influence.

Sadr had the Blue Hats retreat again from the square Feb. 8. Security forces replaced them to keep order, and the protests reportedly stabilized.

This week, on Feb. 11, Sadr changed course once again, saying he might not endorse Allawi after all.

Among all these contradictions are conflicting reports about the Blue Hats' actions. An activist told Al-Monitor on condition of anonymity, “Sadr’s followers who are part of the Blue Hats [were] torturing protesters in Tahrir Square, and they expelled protesters from the 'Turkish Restaurant' that constitutes the main protest platform in Baghdad. The followers destroyed many tents, under the pretext that their owners are vandals tarnishing the protests and offending Sadr.”

Videos posted online Feb. 4 showed the Blue Hats attacking protesters. A demonstrator in Tahrir Square told Al-Monitor, “This attack coincided with the appointment of a new prime minister, which means there is an agreed-upon political goal between the government and parties to subdue the protests.”

A leader in the Sadrist current, Hakim al-Zamili, begged to differ, saying the videos online were fabricated and take events out of context, and are part of a "distortion campaign" against Sadrists.

“Sadrist protesters were the first to stand up against the government. They boosted the protests, and if it weren’t for them, demonstrations would have died out a long time ago," he told Al-Monitor. “The Blue Hats deterred vandalizing armed militias in Tahrir Square and the Sanak area. In Khalani Square in Baghdad, those militias tried to rob stores and take over the Central Bank of Iraq.”

He also dismissed allegations claiming that the Blue Hats are armed militias.

“They are volunteers who believe in the political and ideological convictions of the Sadrist current. They do not receive any support or salary from anyone,” he said. “They are barely 2,000 to 3,000 individuals from across Iraq, and they are unarmed. They never participated in military or security sessions to be dubbed militias.”

Watheq al-Jabri, head of the Iraqi Institute for Strategic Studies, told Al-Monitor the Blue Hats initially withdrew support from the protests because demonstrators had not backed Sadr's "million-strong" march Jan. 24 against the US presence in Iraq, and because protesters "tried to block roads to prevent Sadr supporters coming from the provinces from reaching Baghdad."

Rami al-Sukeini of the Sairoon Alliance, led by the Sadrist current, responded to the accusations of violence by telling Al-Monitor, “Since the beginning of the protests, Sadr has invested his efforts in complying with the will of the people and working on giving them the rights they were deprived of and standing by them against the political class. His supporters have been alongside the protesters since the outbreak of the protests, and this is documented in statements and actions.”

He added, “Concerns about vandals infiltrating the protests and messing up the situation to harm Sadrists … prompted Sadrists to wear blue hats to stand out and prevent [outside agitators from] taking the protests in another direction to achieve partisan interests and certain ends.”

Tamimi Ali Tamimi, a legal expert and former judge, told Al-Monitor, “Regardless of the violent parties and their names, the constant truth is that protesters are being killed. Security forces are responsible, as they are the only official group that should provide protection — not the Blue Hats or any other party.”

Ali al-Bayati, a member of the Iraqi High Commission for Human Rights, told Al-Monitor, “The violations in protests have been ongoing since Oct. 1. Official institutions are the only ones that should provide protection. Clearly, the confrontations are escalating because of the increasing number of party and political bloc supporters, not just protesters, in the squares. Protests have become the front yard of political disputes.”