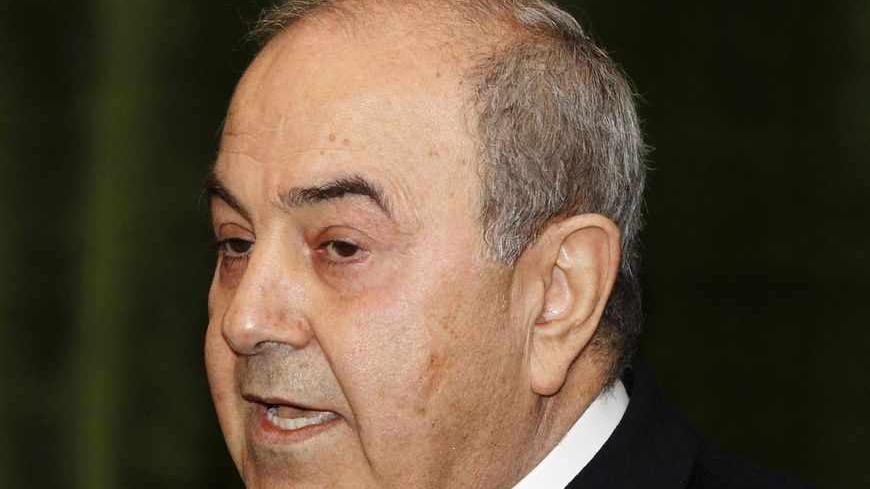 Iraqiya List leader and former Prime Minister Ayad Allawi said that the protests in the Iraq provinces that are home to a Sunni majority won’t stop unless Prime Minister Nouri al-Maliki's government resigns, thus paving a way for a reduced government to be formed to organize early general elections in which its members cannot participate.

During a meeting with a number of Iraqi journalists at his house in the upscale neighborhood of Harthiya in Baghdad, Allawi said, “Maliki did not listen to our advice concerning the need to heed the demands of the demonstrators and attempt to implement as many as possible.” He pointed out that Maliki “went in the opposite direction and described the protesters as terrorists and Baathists.”

Allawi, a secular politician of Shiite roots, heads a list led by mostly Sunni politicians. In 2004, he served as head of the government in the framework of an agreement sponsored by the United States.

“Maliki told us that he has to listen to and contain demonstrators, but instead he described them as terrorists and Baathists, and he even attacked the demonstration squares with arms,” Allawi said.

Allawi believes that the demonstrations will not stop “as long as Maliki is in power.” He said, "The government should resign in order to form a reduced government that can oversee early elections without allowing its members to participate in these elections,” adding, “The second track of the solution may be the return to the Erbil Agreement and the achievement of a prompt partnership."

The leaders of the various Iraqi factions had held a series of meetings in Erbil in 2010, resulting in a power-sharing agreement whereby Maliki became prime minister and the Kurdish veteran politician Jalal Talabani became president. For his part, Allawi headed the council that was supposed to coordinate the process of making important decisions in the country. Allawi said Maliki disregarded this agreement, however, as soon as he received the support of the parliament for a second term.

Allawi firmly believes that Iran — the Shiite eastern neighbor of Iraq — objected to him being placed at the head of the government again. “Iran is determined to confiscate Iraq’s political decision,” said Allawi, who added that he visited Syrian President Bashar al-Assad in 2010 during negotiations to form the Iraqi government. “Assad literally told me: ‘Iran will not allow you to take over as prime minister in Iraq; and, if you want that, you need to go to Tehran and speak to the officials there.’ I absolutely refused to go to Iran, because I do not want [to hold] a position in Iraq that is given to me by another state.”

Allawi denied that his Iraqiya List allies objected to him holding the post of president of the republic during negotiations to form a government in 2010. “All Iraqiya leaders told me that they do not mind if I take over this post, but I refused, because this will provoke our brothers, the Kurds,” he said.

Asked by Al-Monitor about the news reporting that Maliki proposed that he [Allawi] holds the post of president, with the powers of the commander in chief of the armed forces, he replied, “When we went to Erbil to sign the US-sponsored agreement to form a government led by Maliki, we worked on achieving a true partnership in managing the country.

“Maliki, Massoud Barzani and I signed a document that includes pledges to bring about this partnership; the US ambassador in Iraq was a witness on that." He added, “Once we got to parliament to bring this document into reality, the partners turned against us.”

He wondered “what kind of partnership is it, [when] Vice President Tariq al-Hashemi is accused of terrorism, Finance Minister Rafi al-Issawi is being prosecuted and thousands of the Iraqiya List’s supporters are subjected to de-Baathification [laws] or remain in prison on unfounded charges.”

Allawi said he had suggested to his Sunni partners that they work as the opposition in parliament, and do not take part in the Maliki government. Yet, he said, “they were not convinced, because their masses want to be represented in the government.”

Allawi said that he has information showing that Maliki intends to pressure the [Independent High] Electoral Commission to postpone the legislative elections, scheduled in March 2014, for six months, to address the damage — which was revealed in the recent local elections — inflicted to his popularity.

Allawi believes that the recent local election results are a clear message to the State of Law Coalition, led by Maliki, expressing “popular anger with his performance.”

The Iraqiya leader believes that the next stage will produce new political alliances. He praised the performance of the movement led by cleric Moqtada al-Sadr, and the progress made by the Islamic Supreme Council, led by Ammar al-Hakim, in local elections.

On the US decision to invade Iraq, Allawi said that from the beginning, he was not with this decision, and he tried to convince Washington of the need to adopt a different policy — one based on communication with Iraqi army officers and local politicians — to achieve change in Iraq.

“We told them that even if you decide to invade, you need to prune and preserve the state institutions," he said. "Yet, they dismissed the military and allowed the de-Baathification [to happen].”