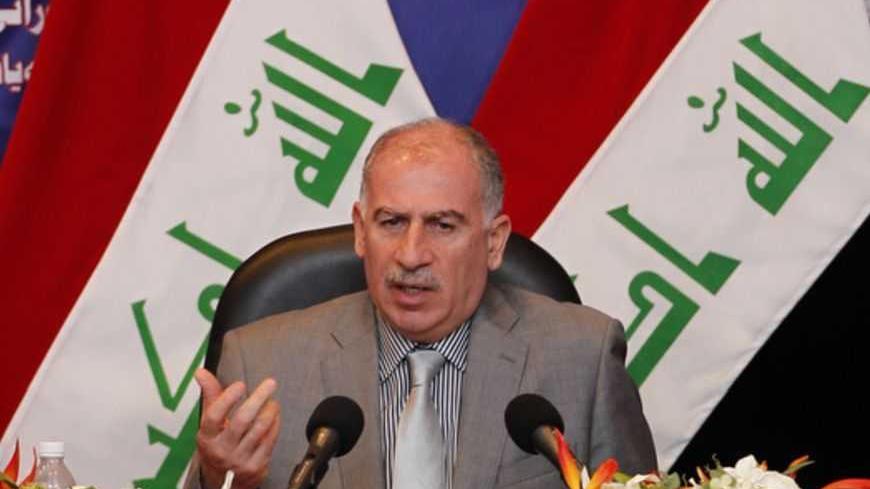 The speaker of the Council of Representatives of Iraq is back to criticizing the prime minister and accusing him of interfering in the work of independent bodies, while tension prevails in parliament between the State of Law and Iraqiya List blocks as their MPs continue to air dirty laundry.

Osama al-Nujaifi, a Sunni leader from the Iraqiya List, deviated from executive measures taken by Nouri al-Maliki last February by isolating the head of the de-Baathification commission. Nujaifi said in a press conference held on Feb. 5 and attended by Al-Monitor that "Maliki continues to interfere with the work of independent bodies."

In Iraq's political system, some institutions are intended to work independently of the Iraqi government. The Iraqi constitution, however, is not sufficiently clear about the ultimate leadership of these bodies, particularly for the Commission of Integrity, the Electoral Commission and the Justice and Accountability Commission.

Political forces are accusing Maliki, leader of the Shiite Islamic Dawa Party, of having gone to considerable lengths throughout his mandate to control those bodies, but Maliki has always denied this, saying that such accusations are attempts to blackmail him politically and to disrupt the work of those bodies.

Last month, Maliki dismissed the head of the Justice and Accountability Commission out of anger at his decision to impose the sanctions intended for members of the dissolved Baath Party on Judge Medhat al-Mahmoud, head of the Iraqi Judiciary Council.

"We constantly note the executive authority's interference in the work of independent bodies ... and we are opposed to this unconstitutional approach," Nujaifi said.

Maliki's opponents say that the appointment of a replacement for Falah Shanshal, the head of the Justice and Accountability Commission, was a mistake and unlawful, as the Council of Representatives decided to keep Shanshal in office and condemned Maliki's interference.

Shanshal is a Shiite leader active in controversial Shiite cleric Muqtada al-Sadr’s movement. He has been head of the Justice and Accountability Commission since 2008, but the Iraqi parliament has not formally voted on his appointment to this position. Thus, Maliki appointed him by proxy, which in Iraq means the appointment is temporary. There is unofficial criteria according to which dozens of sensitive positions in the Iraqi government are filled on a temporary basis.

Nujaifi revealed the content of letters exchanged between him and Maliki, saying that he answered Maliki with a detailed letter about Shanshal's dismissal. He added that he had received a letter from the prime minister explaining what to do with the temporary head of the Justice and Accountability Commission. Nujaifi told Maliki that he had violated the law, and thus Nujaifi had decided to keep him in his position in accordance with the Iraqi constitution, as the commission is affiliated with the parliament. He went on to say that "Maliki's decision is illegitimate."

As the head of the Iraqi parliament attacked Maliki in the press-conference room, accusing him of monopolizing power, MPs from the State of Law Coalition, led by Maliki, rushed to respond to Nujaifi. Their answer did not, however, address Nujaifi’s comments on Shanshal's dismissal.

The Shiite coalition leading the government preferred instead to bring up the issue of Nujaifi's dismissal. Meanwhile, a leader in the coalition used his press conference to air the dirty laundry of his rival leader in the Iraqiya List.

Ali al-Shalah, State of Law Coalition MP, said the speaker of the Council of Representatives of Iraq, Osama al-Nujaifi, "begged" one of the leaders of the Shiite National Alliance to mediate in order to keep him from getting sacked.

The State of Law Coalition is trying to draw the attention of the Iraqi public to the state of weakness and dispersion seen in the Iraqiya List. Shalah said that the bloc led by former Iraqi Prime Minister Iyad Allawi "is divided into seven parties, and every party is speaking on its own behalf."

Allawi, who has been absent from the political arena since the outbreak of Sunni demonstrations against his rival Maliki, saw his bloc suffer a series of grave rifts. Some of the dissidents allied with the prime minister, especially in the Shiite-dominated cities of the south.

Following the press conference held by the leader of the State of Law Coalition, the Iraqiya List coalition returned to the defense of its leader, Osama al-Nujaifi, who is currently a shadow leader and the main commander of the Iraqiya List.

Mohammed al-Khalidi, a Sunni politician close to Nujaifi, said that the latter "has not and will not beg anyone," adding that "what MP al-Shalah said is incorrect and part of the rumors that he spreads from time to time against the speaker of the Council of Representatives. ... This simply demonstrates that he holds a personal grudge against Nujaifi."

The local elections, scheduled for April 20, are increasing the political competition in Iraq. Recent tensions in parliament are nothing more than a part of the political polarization that has resulted from Maliki and Nujaifi’s election campaigns.

This competition, however, has pushed rival MPs to resort to a political rhetoric that often irritates personal sensitivities between leaders rather than supports a vision for the administration of the state.