The governor of Ninevah province, Atheel al-Nujaifi, blames "Maliki and his policies" for the fall of Mosul. 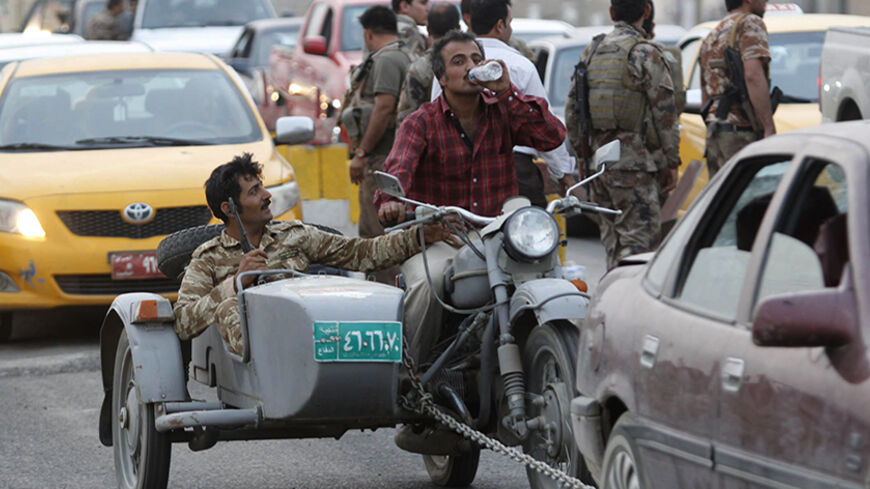 People ride a motorcycle belonging to the Iraqi army at a Kurdish military checkpoint on the outskirts of the northern Iraqi city of Kirkuk, June 11, 2014 - REUTERS

After a long night of shelling between government forces and armed groups in the province of Ninevah in northern Iraq, Ahmed al-Muslawi and his family decided to flee Mosul for Iraqi Kurdistan. When he awoke the next morning, he learned that the city had fallen into the hands of radical organizations, and that the shelling had stopped.

Speaking to Al-Monitor by phone, Muslawi said he didn't expect the city to fall that way. Mosul residents, according to him, expected the course of events in their city to resemble what happened in Anbar province in western Iraq, where government military operations have continued for more than six months.

Muslawi, a clothing store owner, said, "When the militants took control of the city, they knocked on the doors of houses and told residents that they would not be targeted at all … and that their dispute was with the central government and its army."

According to Muslawi, the militants forced the owners of bakeries and gas stations to return to their jobs.

At 3 a.m. on June 10, Twitter users affiliated with the Islamic State of Iraq and al-Sham (ISIS) began tweeting that ISIS had control of security centers in Ninevah.

An officer from the army's 2nd division in Ninevah province, who spoke to Al-Monitor by phone on condition of anonymity, said, "It was during these hours exactly that the army was without leadership."

"We received messages stating that parts [of the city], that were under our control, had fallen. But we were without leaders and had no orders to act," the officer said.

He continued, "At 4 a.m., another officer and I decided to change out of our military uniforms. We took a civilian car and headed to the Kurdistan Region [of Iraq]."

Speaking from Erbil, the officer said, "No one understands exactly what happened."

On the afternoon of June 10, Iraqi parliament speaker, Osama al-Nujaifi, brother of Ninevah Gov. Atheel al-Nujaifi, said at a news conference, "The entire province of Ninevah has fallen. The security leaders fled and left the soldiers to their fate."

Just a few hours after Nujaifi's announcement, the Iraqi Council of Ministers declared a "state of maximum alert" and called for "convening an emergency session in the parliament to declare a state of emergency in Iraq."

The Council of Ministers' statement wa read by Prime Minister Nouri al-Maliki, who appeared confused while reading the document.

Maliki said, "We will not allow Ninevah and Mosul to remain at the mercy of terrorism and terrorists," declaring "[a state of] mass mobilization and alert, to activate all anti-terror capabilities, restore everyday life and take urgent measures to protect citizens."

In a separate news conference, Maliki vowed to "hold accountable those who failed to perform or neglected their duties."

Maliki, who serves as commander in chief of the armed forces, said, "There was serious work by the security services and military leaders to assess the previous stage."

After ISIS took control of the city, the International Organization for Migration announced that more than 500,000 people had been displaced from Mosul.

The security developments raised the concerns of the Supreme Religious Authority for Shiites in Najaf, Ali al-Sistani.

In a statement, Sistani confirmed his "support for members of the armed forces," stressing the need for the Iraqi government and political leaders to "unite their rhetoric and stand in the face of terrorism."

Speaking on the afternoon of June 11, Nujaifi held the Ninevah Military Operations Command responsible for "the fall of the city of Mosul in the hands of ISIS militants."

Nujaifi, who fled to Erbil, said, "Maliki and his policies are responsible for what happened in Mosul," pointing out that he does not support "the enactment of a state of emergency, because it will further complicate the situation."

In the capital, Baghdad, the public seemed frightened about the potential of ISIS expanding, especially following reports that there were ISIS operations aimed at gaining control of the Kirkuk and Salahuddin provinces.

Following these developments, the head of the Sadrist Movement, Muqtada al-Sadr, issued a statement in which he called for the formation of a "peace brigade" to defend shrines, mosques, Husseiniyat and churches in coordination with government agencies.

Yet, Sadr — whose partisans formed the "Mahdi Army" militia, which was a primary party in the civil war that broke out in 2006 — asserted in the statement that he was not ready to enter into a "dirty war of gangs and militias. … I am not ready to be one of those who [lusts after power], and I won't go through a fierce sectarian war that destroys all life."

Iraqi writer and journalist Mazen al-Zaidi said, "Mosul, according to the data, has seen two coups."

Speaking to Al-Monitor, Zaidi said, "The first coup was against the authority of the state, when armed groups — including a mixture of al-Qaeda, Baathists and others — announced, in cooperation with the local government, a [semi-autonomous] 'Ninevah' region, and imposed it as a fait accompli."

He continued, "The second coup was against Gov. Nujaifi, who has 'Brotherhood roots,' and imposed an authority that opposes the entire political process."

Zaidi said, "These data refer to the transfer of the Syrian scenario to Iraq, by 'shuffling the cards' in Sunni areas with the help of ISIS, in its capacity as a part of the alliance that takes advantage of Sunni anger at the Iraqi army."