In an exclusive interview with Al-Monitor, Atheel al-Nujaifi, the governor of Mosul, says that the "Sunni identity was eradicated after the occupation." 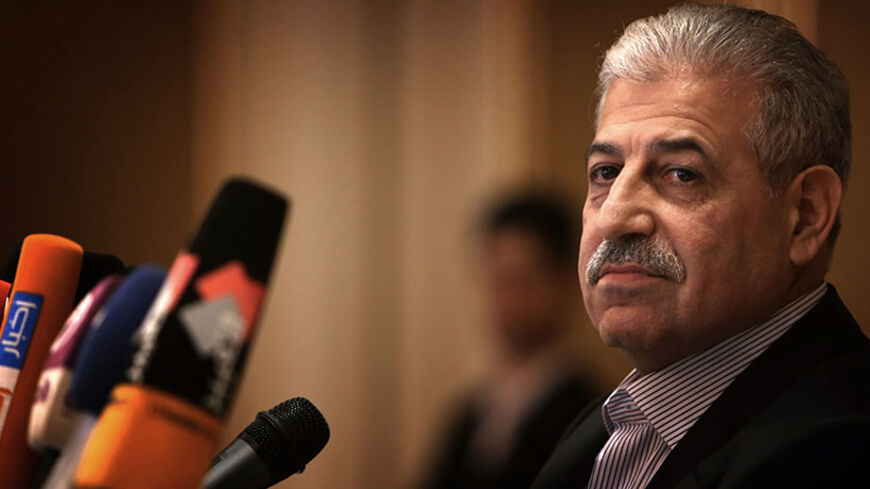 ERBIL, Iraq — While moving among Erbil, Mosul, Kirkuk and Tikrit over the course of four days, I chatted with tribal members, Baathists, former resistance fighters and Naksibendis who joined the Islamic State of Iraq and al-Shams (ISIS) in what has become a Sunni uprising. These actors appear to be a coalition of revenge in a conflict fast assuming solid sectarian colors, but in reality they are a coalition of opposites and of strange bedfellows who are bound to go after one another even without the end of Nouri al-Maliki's rule over Iraq. This is the view of Atheel al-Nujaifi, the governor of Ninevah province, who fled the ISIS takeover. He told Al-Monitor that a re-enactment of the Syrian scenario is not far off.

I spoke with Nujaifi in Erbil, where he had taken refuge. According to him, the way to confront ISIS should not be through yet another sectarian intervention, but with a Sunni approach. The antidote to ISIS is not Shiism, but Sunnism, he believes. Nujaifi has given up any hope of Baghdad restoring order to the country and is now counting on the Kurdistan Regional Government (KRG).

I began the interview with the most critical questions: Who captured Mosul — ISIS or local tribes? Can we say ISIS is the leading actor? Nujaifi replied, “First, ISIS captured some districts of Mosul. When the Iraqi soldiers abandoned their posts and ran off, some tribes and various resistance groups that had fought against the American occupation after 2003 took over other parts of Mosul. They didn’t join ISIS, but ISIS is the largest [group] among them. The lead actor on the first day was ISIS, but on Thursday [June 12] ISIS issued a declaration it called the Medina document. This document said no group other than ISIS will be allowed to operate and that they will fight [those who do].”

I heard a great deal of speculation from the people I spoke with on the way to Mosul. One soldier said, “Behind ISIS is Izzed Ibrahim al-Duri, Saddam Hussein's number two man, Baathists and Saddam’s soldiers.” Nujaifi dismissed this assertion. “I don’t think so. I read a statement by Izzed al-Duri when he said they will fight all Safavi [Iranian] and takfiri groups. We know he is referring to ISIS when he says ‘takfiri groups.’ I don’t think they will be working together.’’

In that case, should we dismiss suggestions that Duri and the Baathist are playing roles? Many people believe Baathists are using ISIS. According to Nujaifi, “No, they [ISIS and Baathists] both had roles. When soldiers deserted, these groups took over their turf, but that doesn’t mean they have joined ranks with ISIS. ISIS and the Baathists are on different tracks. They are not the same and can’t be.”

About the support ISIS has received from tribes and Islamic groups, Nujaifi said, “They can get money and manpower support from some tribal members, but not from tribal leaders. I have no information about tribes cooperating with ISIS.”

The question I ask most these days is how was it possible for an organization like ISIS to put down such strong roots in a city with a rich diversity of religious sects and ethnicities that had peacefully coexisted. When asked, Nujaifi replied, “Because people were under the heavy pressure of the army and the regime. They didn’t like the army and they needed someone to protect them from the army. Also, the police and the army resorted to sectarian attitudes when doing their duties.”

It appears almost impossible for Iraqi actors to develop a joint plan for action against the chaos generated by ISIS. The governor said he is now relying on his own resources and the KRG administration. He is coordinating with Erbil and believes some groups controlling parts of Mosul are ready to fight ISIS. Even if ISIS is ousted from Mosul, however, it will not bring about resolutions to the grievances of the Sunni majority there. It is not enough to treat the matter solely as an issue of terror. Nujaifi had earlier proposed a federalism model for the region, but it was not accepted.

So what is the the real solution to ISIS? Nujaifi offered, “Another course of action is needed to combat ISIS. This issue has to be resolved not by Maliki, but as a Sunni project. We have to struggle against ISIS with our Sunni way. It is not a fight for Shiites or Maliki’s supporters. Maliki cannot fight ISIS. Sunnis can do it because that will prevent ISIS from exploiting sectarian arguments.”

When I reminded the governor that they had earlier tried this with the Sahwa movement, Nujaifi responded, “No, Sahwa was different. Sahwa fought under Maliki against ISIS. They fought for money. We won’t do the same. As Sunnis, we don’t like ISIS because we favor peace and civilization. We are proud to be Arabs. For ISIS, there is no distinction between an Arab and an Afghan. We had our national identity, but the current political regime doesn’t have one. Sunni identity was eradicated after the occupation. This has to be regained.”

Nujaifi holds foreign countries and Iraq’s neighbors responsible for ISIS's empowerment. “There is an Iraqi ISIS but the basic force is made up of foreigners. It was the foreigners who first came to Mosul and then left once the city was in their hands, leaving it to Iraqi ISIS,” he said.

I asked what would happen if Iran or a Shiite group from outside intervened. Nujaifi replied, “It will make the situation more complicated and more sectarian. I am afraid in such an eventuality all Sunnis will join ISIS.”