After mostly ejecting government forces from Sunni areas, the differences over the next stage between ISIS and other Sunni factions will soon emerge. 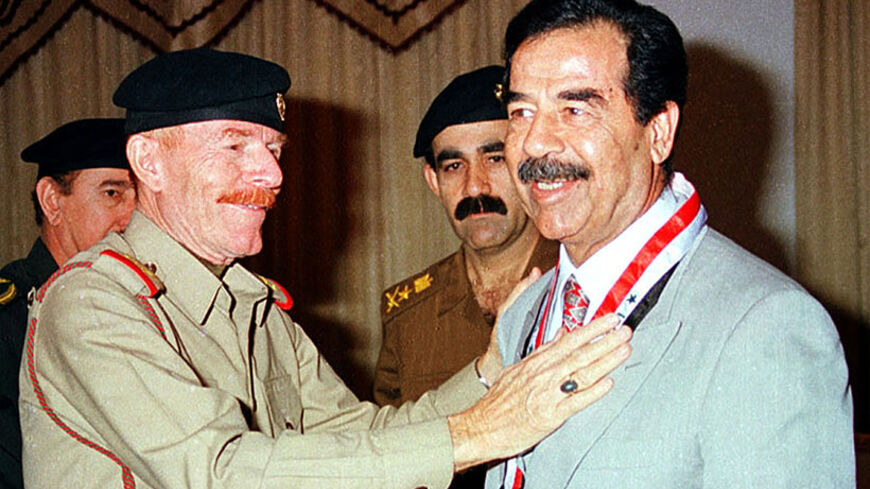 Former Iraqi leader Saddam Hussein (R) is decorated with a medal presented to him by his then-deputy Izzat al-Duri in Baghdad, May 12, 1999. - RETUERS

Reports about the June 21 clashes between the Islamic State of Iraq and al-Sham (ISIS) and fighters from the Naqshbandi Order organization, led by former Iraqi Vice President Izzat al-Duri, have surprised no one.

In fact, a battle among the armed factions fighting the Iraqi army in Sunni cities and towns was expected to break out as soon as things relatively settled down and the gunmen’s influence in Iraq’s Sunni areas was established.

Although news reports indicate that the latest battles in the neighborhoods of al-Riyadh, al-Rashad and Hawija (all in Kirkuk province) happened because those areas refused to pledge allegiance to ISIS, well-informed sources told Al-Monitor that the conflict arose because ISIS sought to kill a number of tribal leaders who have deep connections in the region, most prominently the al-Asi family, which leads the al-Obaida tribe in Hawija.

This incident suggests that the temporary alliance between ISIS and the armed Sunni factions, which revived their role in the Fallujah battles earlier this year, is fragile and can explode at any moment.

There is one central goal common among ISIS, the Sunni factions, the clans, the clerics and the politicians: ending control by the central Iraqi government on Sunni cities and towns. Uniting these disparate groups are the grievances expressed in the Sunni demonstrations, which went on for more than a year, regarding the practices of the Iraqi government.

But after those forces achieved this goal, with victory spreading gradually from Fallujah, Mosul and Tikrit tp areas in Diyala and Kirkuk, the future has become very complex.

A prominent figure in the military council formed in April 2013 after the Hawija massacre and including fighters from Sunni groups and tribes admits that the differences between Sunni fighters and ISIS may explode. However, the essence of these differences is not ideological but related to the objectives of the latest military move. According to observers, the Sunni groups, though in agreement on the need to impose change by force, have many different aims:

Forces with such disparate goals can never agree on a final settlement. But they can unite, like they are today, on the idea of an armed rebellion, which is actually happening on the ground.

The differing goals point to the inherent complexities of any settlement that could be adopted politically, regionally and internationally on the mechanisms of dealing with the Sunni areas, whether they become an independent region, they form a state with a confederal relationship with Baghdad, all provinces become regions, broad powers are granted to decentralized provinces without declaring them separate regions or the situation remains as it is now and political, legal, and constitutional reforms are implemented in Baghdad to address the demands of the Sunni population.

The question that will be raised in the coming weeks in Iraq, particularly by regional and international parties concerned with the effects of the current Iraqi crisis, is the following: With whom are we going to close the deal?

Of course, ideas for a settlement will become clearer with the participation of traditional Sunni politicians, especially those who have found themselves seats in parliament as legitimate representatives of their cities.

But the crisis has moved beyond the scope of Sunni politicians. They are very far from controlling the Sunni situation, which is expected to spawn new leaders that reflect the map of the armed factions on the ground. These leaders will fight to represent the Sunnis in any talks, and may fight land battles over the shape of the outcome.

Today, there is another fundamental question that can be raised: Will there be a prolonged conflict between the different armed Sunni factions and ISIS before the emergence of a regional, international and Iraqi political vision? The answer depends on the Sunni-Sunni understandings that preceded the military action. Was there an agreement on how to manage the next stage, or was the ultimate goal to start a rebellion?

Most likely, the Sunni political, tribal and religious forces, to which the armed factions are linked, may have agreed early on about how to conduct the dialogue after the rebellion. If so, they can reach an agreement on the formula for the solution, but they are unlikely to have made such an agreement with ISIS. Even less likely is that ISIS, the military force with the biggest presence on the ground, would reach an agreement with the other Sunnis in the future.