The spokesman of the Baath Party, Khodair al-Morshedi, considers the Islamic State (IS) a terrorist organization and denies having any ties with it. 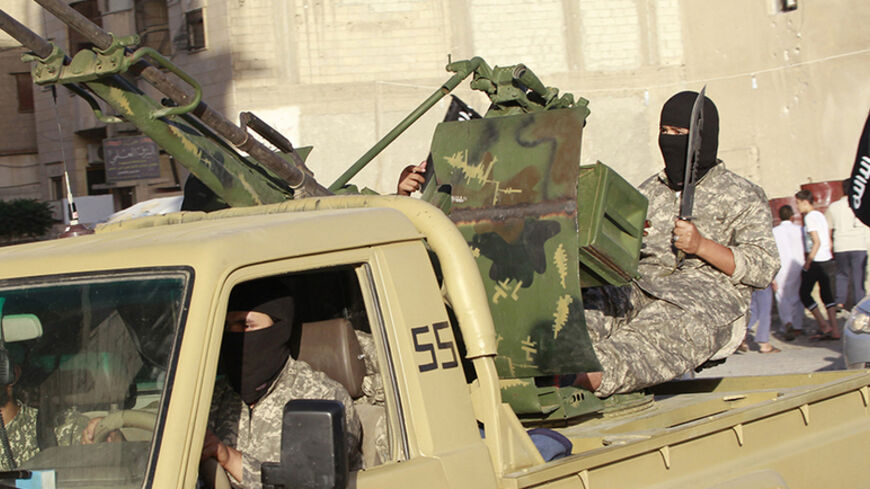 Islamic State fighters travel in a vehicle as they take part in a military parade on the streets of Syria's northern Raqqa province, June 30, 2014. - REUTERS

Khodair al-Morshedi, the official spokesman for the Iraqi Baath Party and the secretary-general of the Islamic National Front of Iraq, comprising various armed factions, described the Islamic State (IS), formerly known as the Islamic State of Iraq and al-Sham, or ISIS, as “an extreme, terrorist movement.”

Morshedi, who said his factions entered Ninevah after it was occupied by the armed organizations on June 10, denies having formed any alliance with IS.

News emerged about battles erupting between the armed factions, some of which belong to the Baath Party, such as the Army of the Men of the Naqshbandi Order, on the one hand, and Islamic State on the other. However, Morshedi, who was disowned by his tribe because of his membership in the Baath Party, told Al-Monitor, “The situation does not require clashing or fighting with any party, as long as the tribal rebels have one goal.” According to Morshedi, the said goal is to “eradicate the sectarian and corrupt political process in Iraq.”

Ahmed al-Ani, a militant for the Tribal Revolutionaries’ Council in the area of al-Qaim, adjacent to the Syrian border, said that the fighters controlling some parts of Anbar belong to IS.

In a phone interview with Al-Monitor, Ani said, “The militants are Sunnis who were abused and tortured and whose rights were taken away by the government of (Prime Minister Nouri) al-Maliki.”

He added that he was a soldier in the army of Saddam Hussein, and that some militants have come from Baghdad. Ani also said that Islamic State was not in control of al-Qaim.

In the same context, Morshedi told Al-Monitor, “Tribal rebels are controlling and managing the liberated cities, and governing the affairs of the people through local councils that were formed for this purpose.”

Ani recounted that when IS entered the area of al-Qaim on June 21, it told the residents that they have to govern their affairs by themselves. “A governor will be assigned soon and will be one of the well-known Baathist figures in the city,” he added.

Ani said, “The borders between Iraq and Syria were opened,” noting that “part of the Iraqi light weapons were smuggled into the Syrian Abu Kamal province.”

Morshedi, however, denied sending any weapons to Syria, saying, “This is not true. The weapons, equipment and vehicles that were seized by the rebels after the defeat and withdrawal of the army and militias will be used by the rebels to liberate Baghdad and Iraq as a whole.”

Morshedi said there were “Baathist cells in the southern provinces of Iraq, just waiting to act.”

But in reality, entering the capital, Baghdad, or any movement in the southern provinces seem impossible, especially after Maliki, the general commander of the armed forces, declared the formation of a reserve army. In addition, more men joined this army after the supreme Shiite leader Ali al-Sistani issued a fatwa in that regard, while the people of southern Iraq, who are mostly Shiites, hold a grudge against the Baath Party because of the repression they were subject to throughout Baath rule in Iraq.