Sheikh Abdul Malik al-Saadi has risen over the last two decades from a little-known cleric opposed to the rule of Saddam Hussein to one of Iraq’s most prominent Sunni religious leaders, writes Ali Abel Sadah. 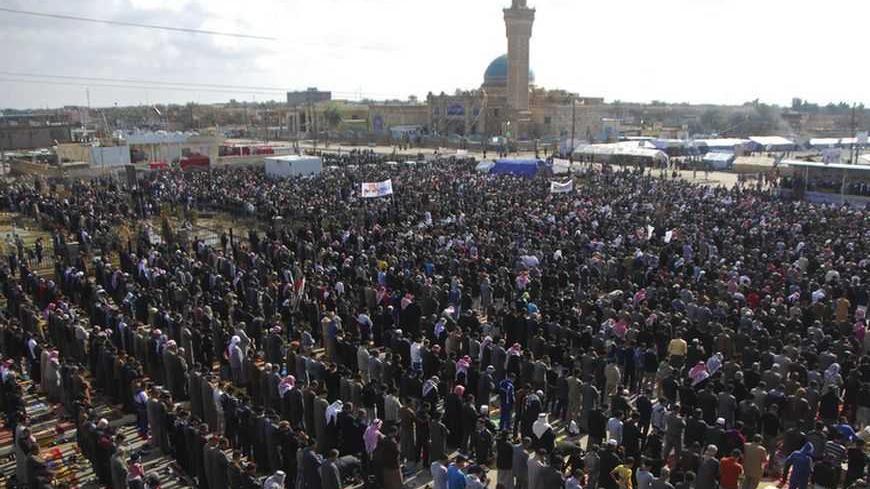 Sunni Sheikh Abdul Malik al-Saadi has taken over the religious leadership in Sunni regions, having remained out of sight since 2003. Saadi reintroduced himself, however, to the scene during the Anbar protests at the end of last year.

The Saadi family has engaged in the preaching of Islam since the mid-1980s. He was known among the residents of Anbar for his opposition to the regime of Saddam Hussein and used to criticize the ruling Baath party during mosque sermons, which led to his arrest in 1988. Security forces dealt with him brutally, leaving him with a broken arm.

Sheikh Saadi’s brother, Abdul Razzak al-Saadi, was a preacher as well. The latter was a vigorous supporter of the Saddam regime and a theorist of what was known in the mid-1990s as the “faith campaign.”

Saddam launched this campaign following the first Gulf war; characterized by stern measures such as the closing of nightclubs and the prohibition of alcohol drinking in public places. It was said that Saddam approached the Salafists at the time to consolidate his position and weaken the Shiites who revolted in 1991.

At that stage, Saadi was preoccupied with teaching and preaching in Anbar. He was appointed as the director of the religious school of Abdullah Bin al-Mubarak in al-Ramadi mosque after it was reopened in 1992. In the same year, the Baath party appointed him to the board of trustees of the Saddam University for Islamic Studies.

In 2001, Saadi left Iraq and headed to Jordan, where he worked as a teacher in Mutah University in Amman. He then assumed a series of prestigious Islamic positions until he was chosen as the Grand Mufti of Iraq in 2007; however, he turned down the offer.

The Grand Mufti of Iraq is the highest religious position for the Sunni Arabs in Iraq. The mufti is entitled to issue fatwas and is chosen after deliberation between the Sunni sheikhs of the Abu Hanifa and Abdul Kader al-Kilani mosques; as well the Sunni Waqf.

Even though Saadi refused to assume the position, he was involved in economic activities aimed at helping the unemployed in Anbar. He was trying to prevent al-Qaeda from recruiting more individuals.

The efforts of Saadi were limited to the issuing of fatwas pertaining to loans and donations granted by local and international donors to fund small projects.

However, in 2010, al-Qaeda killed his brother. Fearing the same fate, he decided to stay on in Jordan.

Following the incident, Izzat Ibrahim ad-Douri, the former vice president, expressed in a condolence message his sorrow over what happened to Abdul Razzak without mentioning Abdul al-Malek, which underlined the bad relations between them.

Today, Saadi is seen as a moderate Sunni figure. The rise of moderates, however, was simply unacceptable in a region that was until recently suffering from an epidemic of bloodshed and from the escalating activities of al-Qaeda.

Unlike other Sunni preachers in Iraq, Saadi did not issue fatwas calling for jihad against the American forces, even though he profusely denounced the occupation and held the occupiers accountable for the “grave mistakes in Iraq.”

Recently, the rage of Sunnis against the Shiite government of Nouri al-Maliki has skyrocketed. Politically, they believe that Iran is playing a part in the marginalization of Sunnis.

Amid increasing sectarian tensions, Saadi decided to take part in the peaceful sit-in organized by the people of the majority Sunni Anbar province. He took the opportunity in his first speech in front of a massive crowd of protesters, however, to allay their concerns.

Saadi said in his speech at the end of December 2012 that the success of the peaceful sit-in primarily depended upon protecting coexistence among the different sects in Iraq. At the beginning of this year, he issued a fatwa forbidding Sunni Arabs from calling for the establishment of federal regions in Iraq.

On the following day, the protesters changed their slogans and talked about “good relations” between Sunnis and Shiites. Some of them even refrained from raising the old Iraqi flag associated with Saddam’s regime.

After the Fallujah incident, during which protesters were shot by soldiers of an Iraqi army patrol, Sheikh Saadi’s patience ran out and he threatened Maliki that he would turn the peaceful sit-in into an armed operation.

Saadi was enraged by the murder of the protesters and described Maliki as an oppressive leader. He also called on the army to abandon its posts and join the protests.

The Shiite leaders can feel Saadi’s weight in Sunni milieus, especially since the prominent religious figure Muqtada al-Sadr sent a delegation to coordinate with Saadi regarding the opposition of Maliki. The Shiite prime minister had contacted Saadi through mediators to admit the value of his role as a voice of calm and moderation.

Saadi is now trying to steer clear of the press and is swiftly moving between Amman and Ramadi. Meanwhile, the increasing protests have started to demand the resignation of Maliki, at a time when Saadi has become a Sunni symbol that might control the course of developments in the future.