As anti-Maliki protests in Iraq enter their third week, the demonstrations are increasing in size, and all sides are urging calm and restraint, writes Ali Abel Sadah. 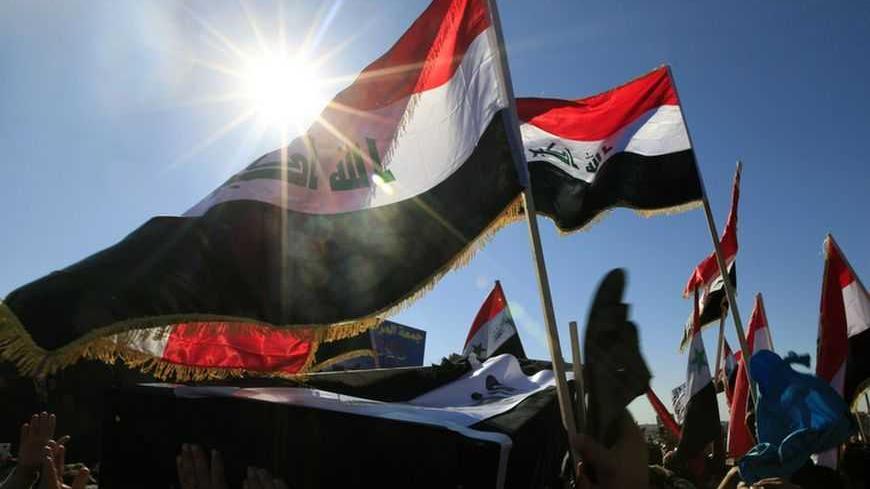 Protests among Iraq’s Sunnis entered into their third week and have only increased in size. They also reached two important Sunni Mosques in the Iraqi capital of Baghdad for the first time. In response, Prime Minister Nouri al-Maliki tried to mobilize his supporters to take to the streets, but these attempts were in vain.

On Jan. 11 after Friday prayers, thousands in Ramadi, Mosul and Tikrit took to the streets in demonstrations titled Jum’a al-Ribaat, which roughly translates to “Binding Friday,” decrying Maliki and his policies for deliberately marginalizing Sunnis.

Abdul-Malik al-Saadi, a prominent Sunni cleric who recently became a supporter of the Sunni protest movement said, “Maliki must take heed of the lessons from Syria.”

Iraq’s Sunnis believe that the Iraqi government’s response to their demands is resemblant of Bashar al-Assad’s actions in the early days of the Syrian revolution. But senior Iraqi politicians in the ruling Shiite coalition feel that the Iraqi arena has little in common with Syria, and that the legitimate demands of the demonstrators will be realized one way or another. They did not forget to mention their concerns that regional support for the Sunnis of Iraq could escalate matters.

On Friday in the northern Iraqi city of Mosul, preachers chastised Shiite religious authorities based in Najaf for remaining silent over the demands of the Sunni demonstrations, according to Sheikh Abbas Hussein.

However Shiite leader Muqtada al-Sadr said in a recorded video message broadcast from his office on Friday that he continues to support the demonstrations, especially after they “stopped raising sectarian slogans.” He added, “We were not expecting that the Sunnis would take part in the Shiite rituals of the Ashoura season.”

Every year Iraq’s Shiites commemorate the martyrdom of Hussein, the grandson of the Prophet, by walking to visit his grave in the southern Iraqi city of Karbala.

In Baghdad, Sunnis were able to rally demonstrations in the neighborhoods of Adhamiya and Ghazaliya, which is where the two most important Sunni mosques, Abu Hanifa and Umm al-Qura, are located.

The Iraqi security forces erected checkpoints in the vicinity of the two neighborhoods trying to prevent more supporters of the demonstration from entering.

On the other hand, supporters of the Maliki-led Dawa Party came out to Liberation Square in central Baghdad, under the protection of private security forces, protesting “against the sectarianism being pushed by the Sunni opposition movements in the country.” However the demonstration, which Al-Monitor correspondents attended, amounted to only a few dozen Maliki supporters.

In the city of Najaf, a stronghold of the Shiite religious authorities, hundreds of demonstrators came out in support of Malaki. But as of now, the activities of the Shiite forces do not compare to that of the Sunnis in Anbar and Mosul.

Prominent Shiite religious leaders have not taken a position in regards to Maliki. However, during his sermon at the Great Mosque of Kufa, an influential house of worship in Najaf, Dhia al-Shouki’s called for, “Respect for the Sunni community, despite the fact that Shiites represent the majority and are thus more deserving of the right to form the government.”

Observers fear that Iraqi political forces will take to the streets to settle scores with one another. If the two sides were to collide, it could possibly lead to violence. Therefore many are calling for Maliki to act more wisely and prudently than he has been doing of late.

A senior official close to Maliki's office said that he is “convinced that efforts to pass a vote of no confidence in the Maliki government will almost certainly fail, due to the balance of power within the Iraqi parliament, and he will complete his second term in office.”

Ali Abel Sadah is a writer and journalist from Baghdad working in both Iraqi and Arab media. He was the editorial manager of a number of local newspapers, and was a political and cultural reporter for more than 10 years. He has published in various newspapers and magazines covering Iraqi political affairs, human rights and civil society.