Sheikh Abdul-Malik al-Saadi seeks to balance support for protests with opposition to a Sunni federal region in Iraq. 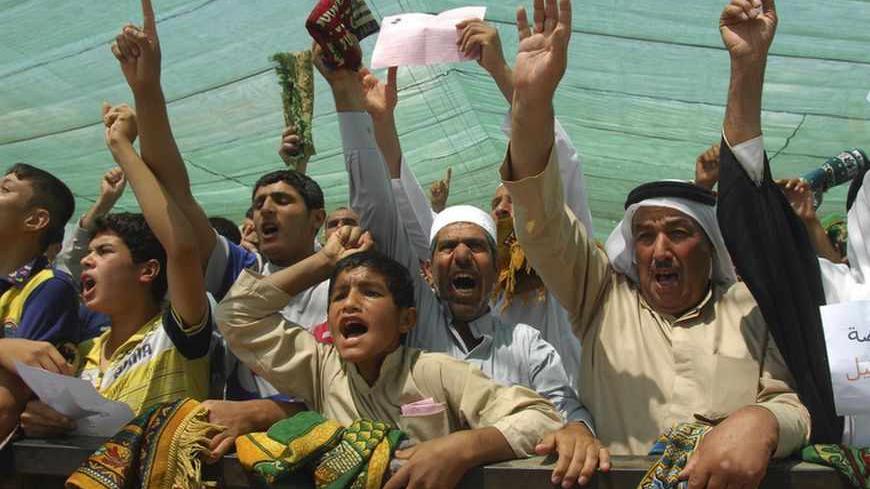 Iraqi Sunni Muslims chant "Allahu Akbar," meaning God is great, during an anti-government demonstration in the central city of Samarra, May 17, 2013. - REUTERS/Bakr al-Azzawi

It is difficult to talk about establishing a religious authority for Iraq’s Sunnis, despite the numerous attempts made in this regard since 2003. The most recent attempt came following the outbreak of protests in major Sunni cities at the end of last year, where Sheikh Abdul Malik al-Saadi emerged as an authority for the Sunni protesters.

Yet, months later, some of these protesters refused to obey him given that he is opposed to the establishment of a Sunni federal region in Iraq.

The Association of Muslim Scholars — formed in 2003 and chaired by Harith Sulayman al-Dhari — seemed at one point a prelude to the emergence of a Sunni religious authority. Yet, the association witnessed a setback when disagreements erupted regarding a fatwa issued by Dhari calling for a boycott of the 2005 elections. Many Sunni segments accused Dhari of excluding Sunnis from establishing the Iraqi state after the American occupation, while Prime Minister Nouri al-Maliki’s first government accused him of orchestrating violent acts. Dhari ended up leaving Iraq in 2006.

There are numerous religious, philosophical and historical reasons preventing the emergence of an agreed-upon Sunni authority, similar to the traditional Shiite authorities. However, at the beginning of the year, it seemed that Saadi’s chances of receiving unanimous Sunni support were great. Saadi’s appearance in a wheelchair on Dec. 30, 2012, earned him significant popularity among popular Sunni circles. Moreover, the quiet nature of his speech against sectarianism made him more popular, even among Shiites.

Saadi’s political rhetoric against the Iraqi government gradually shifted from soft to radical, in light of the rise of protests and the government’s failure to take any in-depth and practical steps to address the protesters’ demands.

This radical rhetoric was evident in a statement issued by Saadi on July 28, 2013, on his return from a medical trip to Turkey that lasted more than two months.

The statement came in response to doubts circulating in political and Sunni circles about Saadi having changed his position on the protests. In his statement, Saadi confirmed that he was committed to the protests' continuing until the government meets the relevant demands. Addressing the protesters, he stressed the need to avoid any “term that may be interpreted on sectarian or political bases.” He also called on the government to dissolve militias and to rely solely and exclusively on the Iraqi army.

The nature of Saadi’s rhetoric — which totally differs from that of Dhari — led the United Nations to take an interest in him and attempt to approach him to discuss issues affecting Iraq’s Sunnis. The most recent initiative in this respect took place on Aug. 7, 2013, in the Jordanian capital of Amman, when Saadi met with Gyorgy Busztin, deputy special representative for Iraq of the UN secretary-general. During the meeting, Saadi revealed his six-point vision for a political solution in Iraq, which included the following points: “preserving the unity of Iraq; amending the constitution; changing the current political process; carrying out a census; holding elections free of quota distributions and building the Iraqi army.”

Saadi returned on Sept. 9, 2013 to confirm these demands in a joint statement issued along with a number of senior Sunni clerics. In this statement, he stressed his commitment to the protests, and held the constitution and the political process responsible for the security and political meltdowns. He also confirmed his commitment to Iraq's unity and his opposition to partition.

A source close to Saadi told Al-Monitor that the recent demands expressed in Saadi’s statements represent “forced solutions to face the growing Sunni desire to form a federal region, just like the Kurdistan Region.”

The source, who preferred to remain anonymous, said, “Saadi has made fewer speeches and statements during recent months, as he faced pressure from a Sunni political-economic line supporting the formation of a federal region as a solution to the Sunni problem.”

The source added, “This powerful and influential line, to which numerous Sunni politicians and parties are affiliated, notably the Islamic Party, is supported by a number of regional trends.”

According to this source, Saadi’s dilemma is that “the advocates of the establishment of a Sunni region are trying to exploit the protests in order to achieve their purpose in the end. On the other hand, even though Saadi rejects this approach, he cannot openly and directly oppose it since this could be interpreted among Sunnis as a desire on his part to break up the sit-ins. This would be a defeat for Iraq’s Sunnis in their confrontation with a government that they consider unjust.”

On a different note, a number of capital owners are settling in neighboring countries — such as Jordan, the United Arab Emirates and Turkey — from which they are managing the financing of most Sunni political activities. According to them, the formation of a Sunni federal region is a solution that would allow them to transfer their investments back to Iraq.

On the other hand, there are certain political currents — enjoying regular foreign support — which believe that prominent Baathists were the ones who paid the price for the process of excluding Baathists from the political, administrative and military equation. These prominent figures were forced to emigrate, retire or lead armed activities within the country.

The source said, “Along with the line supporting the idea that the formation of a federal region is a solution to all of these problems — in light of the unwillingness of the ruling circles to conclude a true partnership for the governance of Iraq and to treat Sunnis as first class citizens — there is another line led by Saadi. The latter believes that Iraq's Sunnis must not bear the burden of the historical sin of dividing the country. This opposing line believes that it is able to achieve its interests through a fair government that includes the Sunni component.”

Of course, there is a third factor raised by Sunni tribal parties. These parties talked about extremist groups, such as al-Qaeda, who want to set the foundation for a radical change in the demographic map of the region.

While one cannot assume that Saadi is capable of mobilizing the entire Sunni street, he is facing pressure that the government in Baghdad was not able to understand. The most important example in this regard is Saadi’s insistence on avoiding the option of forming federal regions. Iraqis consider this option to represent a sectarian and ethnic division of Iraq, in light of sensitive and unfavorable historical circumstances.

The message that Saadi’s supporters want to convey — and that the government does not understand — is that actual, on-the-ground steps are needed to tame the anger of the Sunni street and achieve justice and national reconciliation. This, in turn, would afford a suitable environment for Saadi to announce the dissolution of sit-ins.