The Iraqi parliament’s passing of the Provincial Powers Law has led to calls for the establishment of the Federation Council, which would further decentralize power as stipulated in the 2005 constitution. 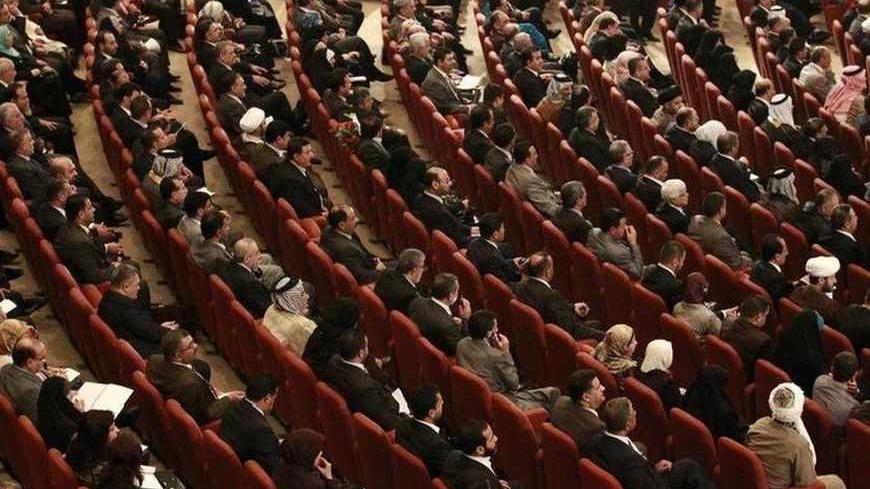 Members of the Iraqi parliament attend a session at the parliament headquarters in Baghdad, Nov. 11, 2010. - REUTERS/Thaier al-Sudani

The Iraqi parliament’s passage on June 23 of the Provincial Powers Law, which bolsters decentralization and gives local governments added authority, encouraged politicians to demand that the Federation Council Law be revived in a bid to further strengthen decentralization.

The 2005 Iraqi constitution states in Article 65 that “a legislative council shall be established named the ‘Federation Council’ to include representatives from the regions and the governorates that are not organized in a region. A law, enacted by a two-thirds majority of the members of the Council of Representatives, shall regulate the Federation Council formation, its membership conditions, its competencies and all that is connected with it.” The council has not yet seen the light of day, despite the parliament submitting a draft law to organize it in 2009.

The importance of the Federation Council lies in its function as a permanent overseer of relations between the central government and the governments of the regions and provinces. The Federation Council’s powers were the subject of disagreements that hindered the adoption of this earlier version of the law. Penned by the parliamentary Provinces Committee, it gave the council powers in keeping with the developments that followed the adoption of the Provinces Law.

On July 8, Nabil Harbo, a member of the Provinces Committee, stated, “The council’s powers lie in its capacity to monitor all pieces of legislation adopted by parliament. It also has the power to veto any decisions aimed at diminishing the authority of provinces. The council will filter out all laws adopted by parliament, and has the authority to either pass those laws or reject them.”

This view of the council’s powers is clearly representative of the parties that favor decentralization. They consider it an additional safety valve safeguarding the authorities that regions and provinces have gained of late. It is a vision undoubtedly crystallizing and expanding to include most of Iraq’s political spectrum, thus leading to the resurgence of demands for the formation of a new council.

The parliamentary Committee on Legal Affairs has confirmed that the current disputes surrounding the Federation Council merely involve procedural matters and formalities, such as the number of representatives allowed from each province and the quota of women and minorities on the council.

In a statement to Al-Monitor, Latif Mustafa, a member of the Committee on Legal Affairs, revealed, “Iraq’s 18 provinces will each have four representatives, with the exception of the capital, which some people are saying should be represented by more than four.” He also mentioned the demand for quotas for women and minorities.

These demands are not fundamental ones, which means that the draft law has a good chance of being adopted by year’s end, giving Iraqi provinces the representative capacity needed to review federal laws that affect their well-being and to propose laws that safeguard their interests.

As noted, the constitution stipulates that passing the Federation Council Law requires a two-thirds parliamentary majority. This type of majority is also required when electing a new president. By setting this condition, Iraqi legislators sought to give the Federation Council added national importance, while making it a rallying point around which the main political forces agree. This condition and the difficulty in achieving it have been the main issues hindering progress in adopting the law until now.

On Feb. 1, 2012, the United Nations called on Iraq to establish the Federation Council as an ancillary to parliament, for “this body would include representatives of regions and provinces, and would therefore complement the House of Representatives, which represents the Iraqi people. The council’s powers are expected to include reviewing laws passed by parliament, in addition to other duties ascribed to it by the pertinent law.”