An Iraqi researcher suggests that provinces across the country producing oil take advantage of the autonomy provided by amendments to the provincial administration laws. 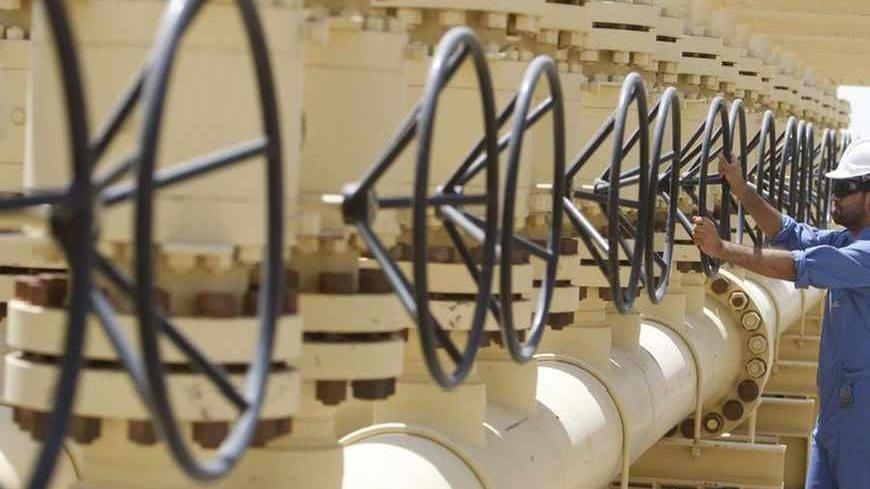 A worker adjusts a pipeline at the Nasiriyah oilfield in Nasiriyah, 300 kilometers (185 miles) southeast of Baghdad, Sept. 8, 2012. - REUTERS/Atef Hassan

An Iraqi researcher has advised the councils of oil- and gas-producing provinces to take advantage of a loophole in the new amendment to the provincial law recently passed by the Iraqi parliament in order to “issue a law of oil and gas specific to each province, and repeal, retroactively cancel and renegotiate the Oil Ministry contracts (service contracts) in compliance with the choices and priorities of each province.”

The Iraqi parliament voted on June 23, on the second amendment of the Law of Provinces not associated in a region, Law No. 21 for 2008. According to several MPs, this law “addresses the overlap between the powers of local governments and the central government, gives broad legislative and regulatory powers to the provinces and will have a positive impact on all provinces.”

Article 2 of Paragraph 6 of the new amendment states: “The joint disciplines stipulated in Articles 112, 113 and 114 of the Constitution are managed in coordination and cooperation between the federal government and the local governments. In case of dispute between the two, the Law of Provinces not associated in a region gets the priority in accordance with the provisions of Article 115 of the Constitution.”

According to the researcher, Nebras al-Kadhimi, stipulating that the priority goes to the provincial law in the event of conflict between the central government and the province allows provinces to legislate their own laws to exploit oil production.

Kadhimi wrote on his Facebook page, “I have advice to give to the …  provincial councils in Basra, Nasiriyah (Dhi Qar province), Amarah (Maysan province) and Kut (Wasit province) in light of the new powers set forth in the amendment of Law No. 21 for 2008, especially Article 2 of Paragraph 6.There is a large gap that you can benefit from. You can actually issue a law on oil and gas that is specific to your province.”

“You are entitled to repeal, retroactively cancel and renegotiate the Oil Ministry contracts (service contracts and the contract of emitted gas exploitation) in compliance with the councils’ options and priorities,” he added.

Kadhimi went on to say, “Nothing can stop you, neither legally nor morally. Form teams of lawyers, and take advantage of this loophole for the benefit of your provinces. This will be your most important task.”

Iraq signed in 2010 a series of service contracts with a number of international companies to develop its oil fields across a number of provinces.

Former Iraqi Oil Minister Ibrahim Bahr al-Ulum said that, according to the Iraqi Constitution, oil policy must be developed by both the central government and the provinces. Bahr al-Ulum told Al-Monitor that "the first and second paragraphs of Article 112 of the constitution stipulate that oil policy must be developed by the central government with the involvement of the provincial and regional councils.”

He continued, “This means that it is necessary to involve local governments in oil and energy management, and that the central (government) not monopolize this.” He asserted that “the recent amendment, which includes the provincial councils’ powers that reach the oil sector, is positive, and shows a desire to distribute powers and move toward decentralization.”

Yet, Kadhimi said that the Iraqi Constitution stipulates “the right of every province to determine whether or not the agreements taking place on its territory are to its advantage. (This issue) was not applied on the ground when the central government negotiated the service agreements."

Ahmed al-Sulaiti, a leader of the Al-Watan bloc — led by cleric Ammar al-Hakim — and who succeeded in holding the post of governor in the oil-rich province of Basra, after this post had been reserved for Prime Minister Nouri al-Maliki’s State of Law Coalition, said,   “The State of Law Coalition is preparing to quash the amendment of the provinces law.”

Sulaiti said that he has information “from private sources that the State of Law Coalition is preparing to submit a request to the (Iraqi) Federal Court to quash the second amendment of the amended provinces Law No. 21 for 2008.” He explained,  “The new amendment activated constitutional (articles) on administrative decentralization, bestowed broad constitutional powers to local governments, and approved an unprecedented increase of financial allocations, which would alleviate the suffering of the citizens in the provinces.”

Hakim’s bloc believes that the previous government of Basra “was negligent with the central government on the right to take part in the management of oil fields.”

Nevertheless, Latif Tamimi, a member of the oil-rich province of Maysan’s council and of the Maliki bloc, said that the provinces should take advantage of this amendment, in terms of coordinating with the central government and the Council of Representatives, and not to turn against them.

In a statement to Al-Monitor, Tamimi said.  “The recent amendment of the provincial councils’ law is to the advantage of the oil provinces.”

Tamimi, a leading figure in the Islamic Dawa Party headed by Maliki, continued,  “The amendment will grant us broad powers in our involvement with the federal authorities, which are represented by the Ministry of Oil and official sectors supervising issues having to do with energy and in the management of matters dealing with oil.”

He went on, saying,  “The local government in Maysan will cooperate with the Council of Representatives to pass laws to grant the province clear powers in the oil file management.” He added, “The presence of new legislation that gives us a wide margin to act in the oil sector helps increase the oil production capacity.”