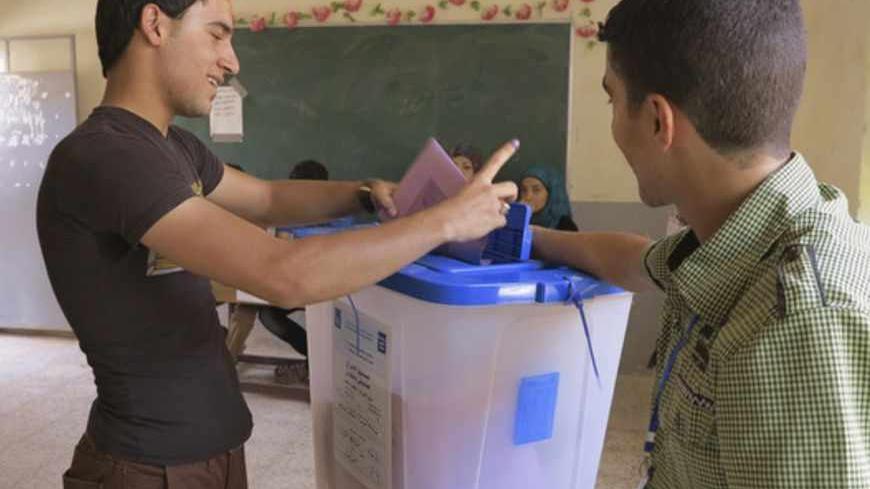 A youth casts his vote into a ballot box during the Iraq's provincial elections at a polling station in Ramadi, 100 km (62 miles) west of Baghdad, June 20, 2013. - REUTERS/Ali al-Mashhadani

Politicians and observers believe that the Iraqi electorate punished the head of the central government in the recent provincial elections. This is because his economic policies, particularly on the provision of services and improving standards of living, have failed.

Prime Minister Nouri al-Maliki’s State of Law Coalition lost control of most of the provincial governments that it won four years ago. Chief among these is the Baghdad provincial government — the country's political capital — and that of Basra — Iraq’s economic capital.

Maliki's opponents, the young clerics Ammar al-Hakim and Muqtada al-Sadr, successfully formed local governments in Baghdad, Basra and a number of Iraq’s central and southern provinces. Yet their blocs came in the second and third places, following Maliki's bloc, in the local elections in April.

Faleh Hassan, an Iraqi writer and journalist, believes that “The framework of the recent local elections was political; however, the voters’ motives were purely economic.” Hassan told Al-Monitor that “Iraqi voters have punished Maliki’s bloc in most of the provinces, as it managed local administrations and failed to provide even the most basic services.”

Iraqi provinces are facing significant power and water shortages while the country’s infrastructure — particularly the health and education sectors — is struggling to provide the people with a minimum of services.

Iraqi economist Hussein al-Asadi said, “For years, Iraqi families’ budgets have been strained in a way that is no longer bearable.” In an interview with Al-Monitor, Asadi said, “Education expenses break the budgets of Iraqi families, regardless of whether the family is poor or rich.” He added, “The free-of-charge public education institutions no longer provide children with the educational standards that these families aspire to; thus, they have turned to private teachers or private schools.”

Asadi continued, “Energy, electricity, fuel and the significantly undeveloped health sector break the families’ budgets. This forces families to pay a lot of money to get better services.”

Asadi said that these issues "are the responsibility of the local governments,” and “The local councils’ main goals are not political, but to provide services. Therefore, they should primarily deal with the economic aspect.” He added, “The economic aspect includes reconstruction — which is a general demand for all Iraqis — and basic services such as water, electricity, housing and others.”

Maliki's bloc won the seat of head of the provincial council in the oil-rich Basra province, but it came up completely empty handed in the local government in Baghdad.

MP Salman al-Moussawi, a member of the State of Law Coalition, said: “The results of the local elections taught us a lesson, but we will make it up in the 2014 legislative elections.”

Moussawi told Al-Monitor: “The change that was brought about in the local governments may be positive, and I support it.” He explained, “In the past four years, the State Law Coalition alone formed most of local governments in the provinces, because it won a majority of seats in the provincial council elections. For this reason, monitoring of executive performance was limited.” He added, “We lost; these are the democratic rules, and we believe in them. Yet we guarantee that there will be strong monitoring of the new local governments’ executive performance.”

He went on: “Anyway, the seats that the State of Law Coalition had lost went to the Sadr and Hakim blocs, which are part of the Iraqi National Alliance that unites us. ... This would probably prevent any intersection of economic policies between the central and local governments. In the end, the matter is not personal.”

Moussawi believes that the presence of the Iraqi National Alliance guarantees a balanced performance between the central government and the provinces. The National Alliance is a bloc formed following the 2010 parliamentary elections, gathering the most prominent Shiite parties and movements in Iraq, including the State of Law coalition led by Maliki, the Islamic Supreme Council of Iraq led by Hakim and the Coalition of Liberals led by Muqtada al-Sadr.

Nevertheless, MP Faleh al-Sari, a member of Hakim’s bloc, said, “The outcome of the local elections are the electorate’s clearest assessment of the local administrations’ performance.”

In a statement to Al-Monitor, Sari said: “Governors affiliated with the State of Law Coalition did not even win as members of the provincial councils, which proves that they failed in serving [the people]. ... Supposedly, the new administrations determined in advance the economic problems that they will face in the provinces, and prepared the necessary solutions.”

He concluded: “If that is achieved, the success of the local administrations will be guaranteed regarding the economic files.”