Iraqi Prime Minister Nouri al-Maliki’s State of Law coalition has lost control of the governorship in the oil-rich province of Basra, adding a new wrinkle to oil disputes in the region. 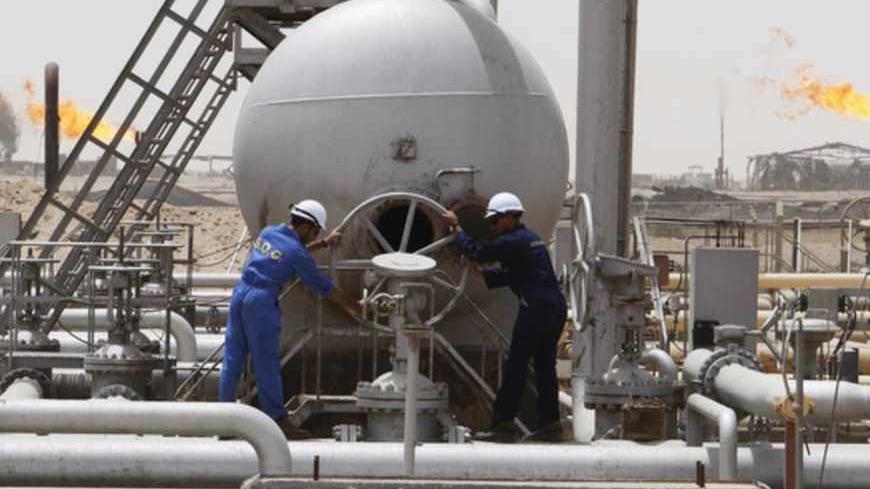 Workers of the South Oil Company (SOC) adjust a valve at the Rumaila oil field in Basra province in this May 24, 2010 file photo. - REUTERS/Atef Hassan

The change of the municipal government in the oil-rich Iraqi city of Basra, some 490 km (305 miles) from Baghdad, raises a number questions regarding the policy that the new government will adopt in dealing with the many foreign oil companies operating in the area on service licenses from the central government in Baghdad.

Prime Minister Nouri al-Maliki's coalition failed to retain the governorship of Basra province — considered the highest local authority, according to the Iraqi constitution — after winning it in the last round of elections. Instead, the coalition was forced to make do with heading the municipal council.

Possession of the governorship of Basra went to the bloc of the Shiite cleric Ammar al-Hakim, who supports granting a greater voice to Iraqi Sunnis in managing the country's affairs. He prefers to work with another cleric, Muqtada al-Sadr, instead of Maliki.

A source in the prime minister's office informed Al-Monitor that "Maliki was extremely angry when Hakim and Sadr decided to ally with one another and exclude Maliki's State of Law Coalition from the governor's office of Basra."

The oil companies in the area confront a number of problems related to employing Iraqis in their enterprises in the Basra province.

Hakim's bloc, which has chosen to name itself Al-Muwatin (The Citizen), stated that the previous government of Basra "was negligent with the central government concerning the right to participate in managing the oil fields, which is laid out in Article 12 of the Iraqi constitution."

A leading figure in the bloc, Ahmad al-Sulayti, said that, "The previous governor of Basra belonged to the prime minister's central bloc; for that reason, the city's role in the process of concluding contracts with foreign companies was extremely limited since the former governor gave up that right to the prime minister."

In his comments to Al-Monitor, Sulayti added that, "The Iraqi constitution contains an explicit provision according local governments the right to share in the administration of the oil fields discovered before 2005, when Iraq's permanent constitution was being written. This has not happened in Basra," he said, stressing that, "The local government in Basra has not been given any role worth mentioning in the process of investing in oil fields; Baghdad has taken an exclusive monopoly on the entire process."

Sulayti noted, “The central government is seeking to monopolize the administration of oil manufacturing. This is simply unacceptable, for it will have a negative effect on the province.”

Sulayti stressed that the Hakim bloc that has taken power in Basra’s local government “supports the development of oil manufacturing and attracting stable oil companies to the area.” However, he continued, “We also support the provincial government in establishing service and development projects. [Nearly] 80% of Basra’s territory lies outside the control of the local government, due to claims that it is oil territory. This prevents the local government from completing its economic and residential projects. ... The local government must be present when oil contracts with foreign corporations are signed, so that the rights of local inhabitants can be guaranteed.”

Sulayti asserted that “Basra’s new government is more open than was its predecessor to the economy. It has programs to transform the city into Iraq’s economic capital through legislating a special law on the matter.

"The proposed legislation includes provisions for forming a transportation body, development of the border regions, airports, ports and free[-trade] zones to attract investors, as well as granting broad authorities to the Investment Association in Basra, the formation of a Capital Secretariat in Basra and the granting of wide powers to its directors.”

But a spokesman for the State of Law coalition in Basra expressed his belief that “oil policy is under the jurisdiction of the federal government; it is not subject to the policies of the local governments.”

According to a statement to Al-Monitor from Salem Taqi, “The economic situation in Basra is generally linked to the legal organization that governs investment.” He stressed, “The general conditions prevalent in the country cast a long shadow over the conditions in Basra.”

He added: “Insofar as the governor of Basra has changed, the reigning concepts and visions must change. But it is far too early to issue judgements on the matter.”

He went on to say:  “The governor from the Al-Muwatin bloc are the owners of the 'Basra: Iraq’s Economic Capital' project. And perhaps we will see a change relating to economic visions.”