As disagreements persist with Erbil, Baghdad has requested that an unimplemented customs tariff law be postponed in what some see as a bid to buy time for tensions to cool. 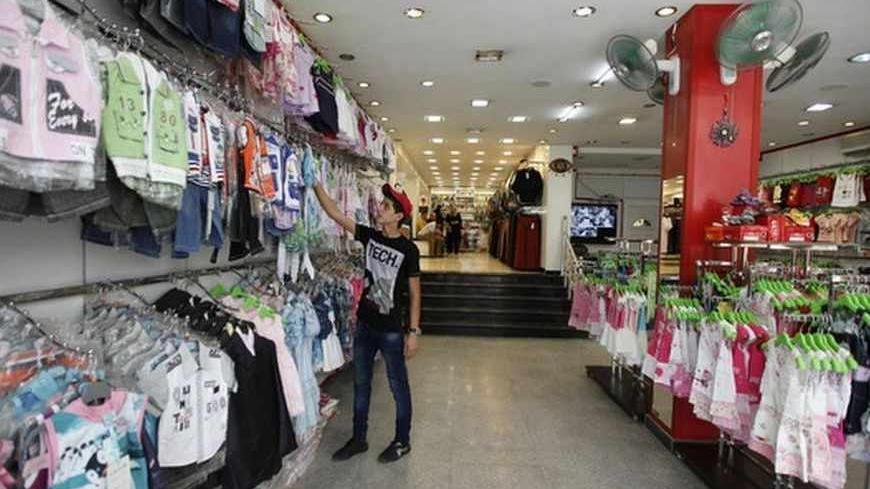 A customer shops for clothes at a clothing store in Baghdad's Karrada district Aug. 14, 2012. Iraq relies on imports from neighbors like Syria, Turkey and Iran for 95% of its consumer goods. - REUTERS/Mohammed Ameen

An Iraqi customs law, held up for almost three years, may still stall because of a dispute between Baghdad and the Kurdistan Region over the collection of customs revenue at border crossings.

The Iraqi parliamentary finance committee has announced that it added amendments to the law regulating the levying of a customs tariff on goods entering the country, enacted Feb. 2, 2010. The government had then requested to postpone its implementation in order to avoid price increases, provided that this law enters into force as of June 30, 2013.

The Iraqi government had requested that the implementation of this law, by virtue of which the customs fees on imported goods are collected in accordance with the rates specified in the customs duty rate table and crop calendar, be postponed for one year “in order to preserve market prices and protect consumers.”

In an interview with Al-Monitor, MP Amin Hadi, a member of the Iraqi parliamentary finance committee, said that “All members of the finance committee agreed to submit the customs tariff law to vote, and there were no objections.” Hadi continued, “We discussed the government’s request to postpone the implementation of the law for one year,” and explained that “The law will be gradually implemented over a period of three years, once it is passed.”

He added, “This mechanism, which is extended over a period of three years, gives the authorities concerned with developing the infrastructure to implement the law the necessary opportunity to accomplish their tasks.” He explained, “The application of the customs tariff law needs a large computerized system and a high level of supervision.”

Before 2003, Iraq imposed customs tariff on goods in accordance with Law No. 77 of 1955. This was suspended after US forces entered Iraq, and former administrator of the Coalition Provisional Authority in Iraq Paul Bremer issued a decree imposing a 5% tax on all commodities entering the country. This tax was known as the "Iraq Reconstruction Tax" back then.

Yet the Iraqi parliamentary economy and investment committee believes that the proposal to implement the customs tariff law according to a three-year plan is not related to completing the infrastructure necessary to apply the law, but rather to settling the conflict between the central government and the semi-autonomous Kurdistan Region regarding the management of border crossings.

Since the early 1990s, Baghdad has not controlled the Ibrahim Khalil crossing with Turkey, Administration of the crossing was turned over to the Kurdistan Regional authorities. Post-2003 up to today, the situation has remained unchanged.

The Ibrahim Khalil crossing is located approximately 70 km (43 miles) northwest of the city of Dohuk, the capital of Dohuk province. It is the primary crossing that connects the Kurdistan Region with Turkey, and is the main commercial land gateway between Iraq, Turkey and European countries.

The Baghdad government stated, “All border crossings in the Kurdistan Region are out of the central government’s control, although Erbil denies this.”

Those close to Iraqi Prime Minister Nouri al-Maliki have accused Kurdistan Region President Massoud Barzani of imposing control over the Ibrahim Khalil crossing by force and monopolizing all funds derived from it.

MP Amer Al-Fayez, a member of the Iraqi parliamentary economy and investment committee, said that the “three-year time limit specified by the proposed application of the customs tariff law came to resolve the problems between Baghdad and Erbil over the border crossings in the [Kurdistan] Region, and it has nothing to do with the idea of ​​completing the infrastructure [to apply the law].”

He went on, "The government will work with the Kurdistan Region to settle the disputes within the three-year time limit specified in the law.” He stressed that “Settling the disputes and the proper implementation of the law create significant gains for the Iraqi economy, and protects the GDP and the consumer at the same time.”

Fayez called on “the relevant parties — the Central Organization for Standardization and Quality Control in particular — to benefit from this time limit in order to create an integrated electronic system at the border crossings, so that the law is properly implemented and Iraq reaches the level of developed countries [in this regard].”