Experts estimate that Iraq’s federal reserves have reached $80 billion, and are likely to grow given an expected increase in oil output. 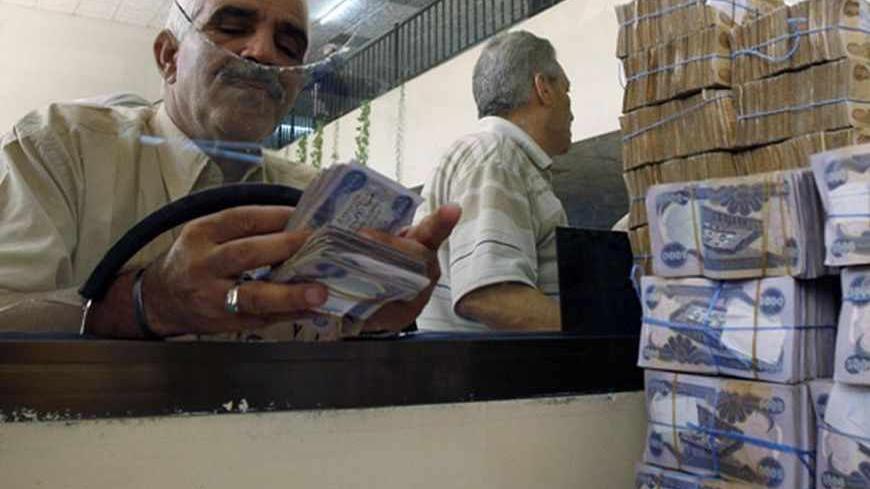 A client counts his money at Al-Rafidain Bank in Baghdad, June 21, 2009. - REUTERS/Bassim Shati

According to an Iraqi financial expert, the value of Iraq’s federal reserves currently amounts to about $80 billion, following the recent increase in the country’s oil exports. Nevertheless, no information was made available by the Central Bank of Iraq (CBI) to this effect.

Speaking to Al-Monitor, Iraqi financial expert Hussein al-Asadi said, “According to my information, the value of Iraq’s federal reserves currently amounts to about $80 billion. This includes funds, precious metals and other items.”

Nevertheless, the spokesman for the CBI, which is charged with managing the federal reserves of Iraq, has yet to issue a statement in this regard. Meanwhile, Al-Monitor’s correspondent in Baghdad failed to obtain comment from the bank’s governor, Abdul Basit Turki, to this effect, or determine the identity of those authorized to speak to the media. The bank has only issued statements to comment on the developments of its work.

The last comment made by the CBI regarding the country’s federal reserves dates back to Jan. 31, 2012, when the bank denied the “decline of gold reserves.” The CBI stated, “They have been stable throughout the past months and amount to 29,730 tons.”

Asadi added, “The US dollar is the main currency in the Iraqi reserves. There are also some reserves in other currencies, in addition to gold. ... Due to the troubled military and political conditions of the country, Iraq’s reserves cannot be invested to a large extent, as is the case in China or the United Arab Emirates, for instance.”

“Iraq is distributing its reserves to a number of banks just to protect [these funds], although it does generate some interest on the deposits,” Asadi added.

Asadi also talked about the crisis that took place between the Iraqi government and the CBI under the management of its former Gov. Sinan al-Shabibi, who refused to lend the government a part of the reserves to implement projects related to providing services to citizens such as water and electricity.

Asadi added, “Article 26 of the CBI law explicitly states that it is inadmissible to lend to the government.”

On how the reserves are formed, Asadi said, “Iraq’s annual budget is in Iraqi dinars, which the CBI owns. The state’s revenues are from oil exports, and they are mostly in US dollars. The government buys dinars from the bank, which results in profits for the bank. ... The total CBI profits from selling dinars to the state constitute the country’s federal reserve, whose growth is associated with state spending. State spending increases in proportion with its oil exports.”

Moreover, Asadi said, “With the expected increase in Iraq’s oil exports in the near future, the country’s reserves are likely to grow to a large extent in the coming years.”

For his part, Iraqi MP Abdul Hussein Abtan, who is a member of the parliamentary economic committee, said to Al-Monitor, “The total value of funds and precious metals that make up Iraq’s federal reserves amounts to about $76 billion.” He added, “This reserve was only invested in projects to support the stability of the Iraqi dinar's exchange rate.”

Abtan also talked about the currency auction, where the bank is putting up amounts of US dollars in cash for auction three times per week, to provide hard currency for traders and suppliers.

Furthermore, in a phone call with Al-Monitor, Ahmed Hassan Faizullah, a member of the parliamentary finance committee, denied the fact that “the government is able to use Iraq’s federal reserves, despite its need for funds on more than one occasion.”