The Central Bank of Iraq has taken measures to slow the fall of the Iraqi dinar, which has plummeted against the US dollar in recent weeks. 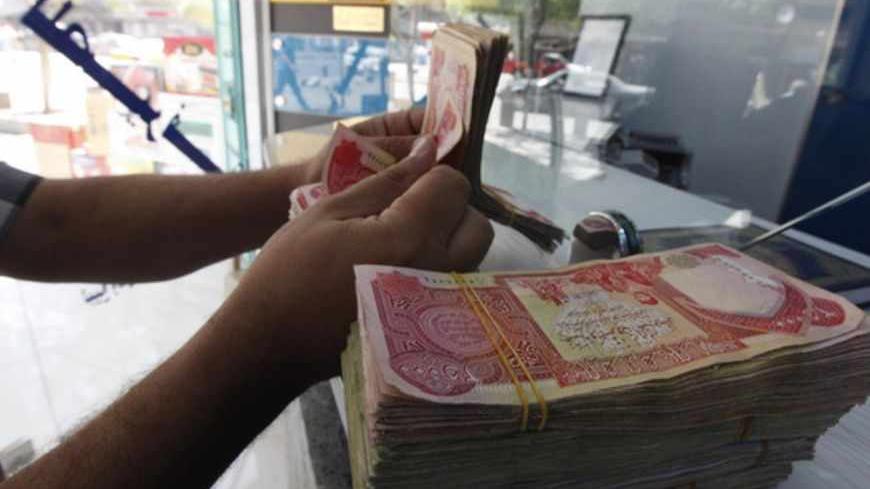 Over the last few days, the government in Baghdad has been preoccupied with attempting to control the exchange rate of the Iraqi dinar against the US dollar. The rate has been dropping since April, reaching its lowest at the beginning of this week.

During the preceding week on the local market, the dinar dropped against the dollar from 1,200 to 1,300, widening the gap against the official exchange rate by 121 dinars.

The Central Bank of Iraq (CBI) sells one dollar for every 1,179 dinars to authorized banks, which then sell it for 1,189 dinars to citizens traveling for medical treatment. Otherwise, traders and others looking to buy dollars must enter a public auction for hard currency sales managed by the CBI. This is one of a series of measures overseen by the Interior Ministry. The CBI, the country's monetary policy authority, recently held a series of meetings with members of the country's Parliamentary Presidential Board — which consists of Speaker Osama al-Nujaifi, First Deputy Speaker Qusai al-Suhail and Second Deputy Speaker Aref Tayfur — to explain how to deal with the decline in the local exchange rate.

In a statement issued on May 12 and obtained by Al-Monitor, the Iraqi legislature announced that the parliamentary presidential board had met that day with Abdul Basit Turki, governor of the CBI by proxy and head of the Supreme Audit Board. It also proclaimed, “The Parliamentary Presidential Board expressed its full support for the CBI scrutinizing the private banks’ activity, archiving information and taking reform measures, which include controlling the exchange rate of the dollar, reducing money laundering and strengthening the CBI’s capacity in economic development.”

In a separate statement, issued May 13, the parliament announced that Suhail had “chaired the Finance Committee’s meeting in the presence of CBI governor Abdul Basit Turki.” Suhail stressed “the need to determine procedures taken by the CBI’s administration to address the fluctuation in the dinar’s exchange rate against the dollar.” The parliament also emphasized, “It is important to know the true causes of this fluctuation, which will negatively affect the [quality of] life of the Iraqi citizen.”

The CBI’s governor, according to the statement, "gave a presentation of the CBI’s policy and recent activity, particularly the CBI’s auctions and its administration’s procedures to combat the fluctuation of the exchange rate for the dollar." In addition, members of the parliamentary finance committee reviewed “their suggestions and recommendations on the developments in the auction and dollar-exchange methods.” They also stressed “the need to take measures to prevent some of those who trade with the money of the Iraqi people  from exploiting the CBI’s auction.”

Economist Jawad al-Shammari said in an interview with Al-Monitor, “The CBI follows a vigilant policy when dealing with the media. It is probably the party that leaked information on the increasing Iraqi foreign currency reserves in order to calm mounting fears as a result of the sharp decline in the value of the dinar against the dollar.”

Shammari added, “The CBI holds daily sessions to sell foreign currency with both governmental and private participation. The sales can be either in cash or in the form of overseas transfers in exchange for commission.” Shammari believes that “this measure — which aims to control the dinar exchange rate against the dollar — is no longer effective due to the daily, increasing gap between what the CBI offers in the auction and the actual market need.”

Haider al-Abadi, head of the Parliamentary Finance Committee, confirmed having “received reassuring messages from CBI officials on controlling the exchange rate fluctuation.” Abadi said that the CBI took measures enabling citizens to obtain foreign currency from public and private banks, including transfers for travel or treatment. He reiterated, "The problem is limited to the gap between supply and demand for US dollars in the Iraqi market.”

The CBI holds daily sessions to buy and sell foreign currency with the participation of Iraqi banks, except for public holidays, during which the CBI suspends these auctions. The sales can be either in cash or in the form of overseas transfers for a commissioning fee.

Omar al-Shaher is a contributor to Al-Monitor’s Iraq Pulse. His writing has appeared in a wide range of publications, including France’s Le Monde, the Iraqi Alesbuyia magazine, Egypt’s Al-Ahaly and the Elaph website. He previously worked for Al-Mada, covering political and security affairs, and as a correspondent for the Kuwaiti Awan newspaper in Baghdad.