The Central Bank of Iraq’s practice of auctioning US dollars has come under fire amid suspicion that the practice leads to money laundering and the channeling of dollars to Iran, reports Omar al-Shaher. 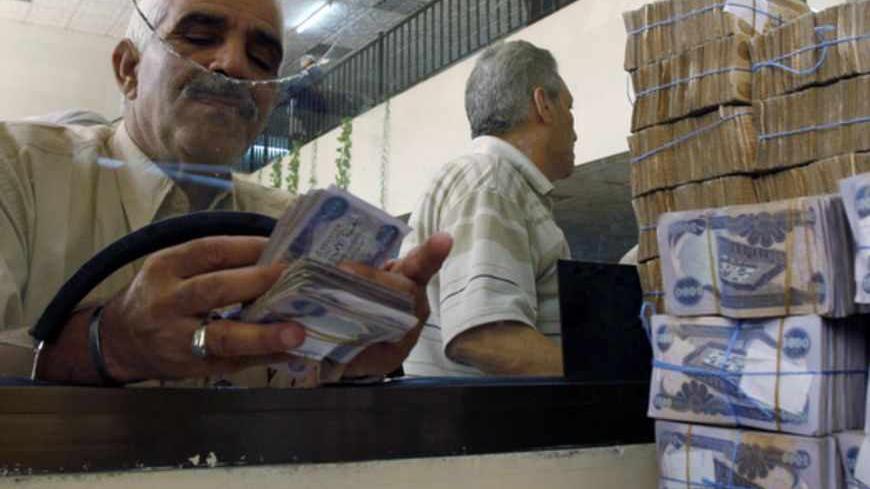 According to experts, the hard-currency auction governed by the Central Bank of Iraq (CBI) — the authority in charge of implementing monetary policy in the country — has ushered in the formation of financial groups, in which board members of Iraqi private banks are investing.

Every day since 2004, the CBI has held an auction through which hard currency is sold to banks, companies and traders in exchange for evidence of import and transaction receipts. The auctions aim to prevent market speculation and stabilize the exchange rate of Iraqi dinars to the US dollar. The CBI — which does not deal with individuals — sells $1 for 1,118 Iraqi dinars.

The exchange rate has been fluctuating following an arrest warrant issued against the former governor of the CBI, Sinan al-Shabibi, at the end of last year. During his term, Shabibi tightened the auctions as information leaked about smuggling money from Iraq to Iran to meet the latter’s needs for hard currency amid international sanctions.

As a way of dealing with the accusations, the CBI prohibited any bank or company with capital of less than $400,000 from taking part in the currency auction. Additionally, all participants had to submit their participations to the criminal division in the Ministry of Interior, the economic crime unit and the money-laundering division of the CBI for approval.

This string of tight measures has reduced participation in this auction to a minimum. Afterward, the CBI was accused of granting currency-trading rights to a limited number of companies and banks, which resulted in local-currency devaluation as dollars became scarce.

In an attempt to contain the damage, the CBI authorized a number of private banks to directly sell a specified number of dollars to Iraqi citizens for travel purposes and medical treatment overseas. This authorization allows whomever holds an Iraqi passport to buy $5,000 from private banks once per month, according to the CBI rate of 1,118 Iraqi dinars to the dollar. This practice has become lucrative.

The exchange rate in the Iraqi black market still stands at around 1,225 Iraqi dinars to the dollar, a difference of seven dinars per dollar. Therefore, the long queues in front of private banks have become a normal occurrence. In some occasions, currency traders have offered to rent passports from individuals so that they can purchase more currency.

The CEOs of some private exchange companies claim that the banks authorized to sell US dollars are dealing with intermediaries in exchange for undisclosed commissions. These allegations, however, have yet to be proven. Officials from the CBI and private banks have refused to comment.

Amin Abbas, a member of the Financial Committee in the Iraqi parliament, said that “the CBI takes full responsibility for the fall of the exchange rate of the Iraqi dinar to the US dollar because of its restrictive measures in granting permits to exchange companies. The process, therefore, has become limited to specific companies. Some companies are taking over the process of hard-currency acquisition from the CBI as a result of the restrictions imposed by the CBI’s administration,” he added.

Following the arrest warrant issued against Shabibi, Prime Minister Nouri al-Maliki appointed Abdel-Basset Turki, former head of the Supreme Audit Board, as interim Central Bank governor. Yet talk about the CBI’s responsibility in the drop of the dinar’s exchange rate has endured, even after Turki assumed his position.

Mohammed Khalil, an official in the Iraqi parliament’s Economic and Investment Committee, noted that “the current administration of the CBI has hindered the flow of US dollars into the market and the access of citizens and traders to this currency as a result of its restrictive measures. [The CBI] fears the smuggling of significant amounts of hard currency to other countries and money laundering.”

Khalil continued, “The CBI has to facilitate the process of pumping US dollars into the market and must then meticulously observe its exchange inside and outside the country in order to prohibit money laundering and similar violations.”