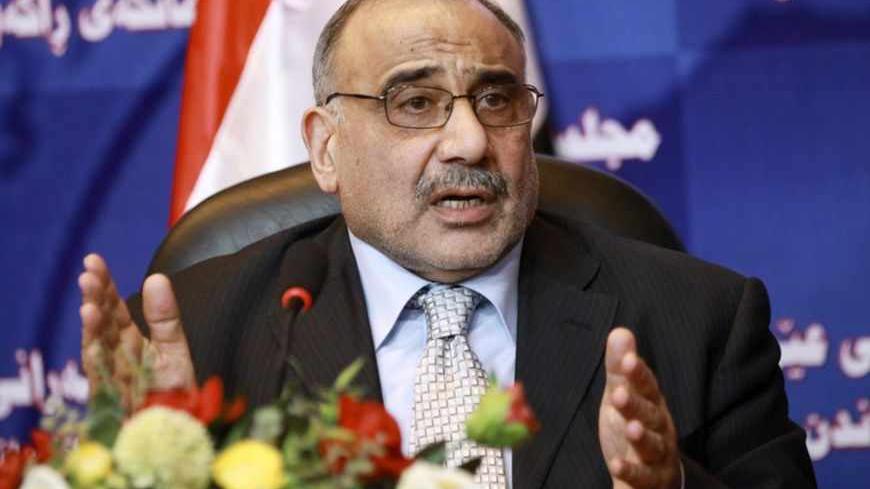 Adil Abdul-Mahdi, the former Iraqi vice president who resigned from his post, vehemently criticized Iraq’s economic policy, describing it as a failure. Abdul-Mahdi warned that tampering with the balances of nature of the economy could lead to “tsunamis, desertification and misinterpreted fluctuations.”

Abdul-Mahdi is one of the most prominent figures of the Islamic Supreme Council headed by Ammar al-Hakim. He assumed the post of minister of economy during the mandate of former Iraqi Prime Minister Ayad Allawi, and was later appointed vice president before presenting his resignation due to political conflicts.

On his personal Facebook page, Abdul-Mahdi wrote about the dramatic fluctuation in the exchange rate of the Iraqi dinar against the US dollar since the beginning of April. “The high demand for the US dollar that we have seen for months has been widening the gap between supply and demand, at about $60 million-$70 million per day. A black market has emerged, in addition to two different exchange rates with a difference of 8%-10%.”

Yet, the value of the dinar improved this week following news about a proposal presented by the parliamentary Financial Commission, which stipulates disbursing half of all state employees’ salaries in dollars.

Hussein al-Najem, a financial expert, expected the exchange rate of the Iraqi dinar to keep advancing due to “new measures espoused by the Central Bank of Iraq (CBI) pertaining to controlling the flow of US dollars into the Iraqi market and to the funding of foreign trade.”

Speaking to Al-Monitor, Najem added, “The real value of the Iraqi dinar is strong; it relies on an exchange reserve of $60 billion, which is a weighty cover amid the international economic crisis. The regional challenges have impacted the exchange rate; yet the Iraqi government has contained the crisis through the CBI’s policies in regard to controlling the flow of US dollars into the Iraqi market and regulating the funding of foreign trade.”

According to Abdul-Mahdi’s statement on his Facebook page, “This is a disturbing issue that takes us back to the policies of inflation and multiple exchange rates.” He continues, “Our problem is that we have a strong dinar coming from the oil revenues within a fragile, single-product economy that depends on foreign [markets], not only for imports and tourism, but also for medical treatments, migration, residence, investment, speculation and savings.”

“We have to enhance the performance of the economy in order to consolidate it. [We should] become more open for the sake of our society and the national economy, in order to establish a regional and international status for the dinar so as to make it more valuable and increase demand for it. We leaped forward, and our successful monetary policies began to suffer the consequences of the failed economic policies. While we were concerned about pennies, we lost dollars. We accused and detained people first, and gathered evidence later.”

Clearly, Abdul-Mahdi is alluding to the ouster and prosecution of former CBI Governor Sinan al-Shabibi in October of last year, on charges of corruption and wasting of public money. Subsequently, Abdel Basset Turki was assigned as the interim governor.

Abdul-Mahdi believes that “if concepts and measures are not altered in tandem with the changing of regimes, they will clash — as is currently happening. When we abandon the official exchange rate for the sake of supply and demand; [when we halt] restraining transfers, save for a few exceptions, and we instead lift the restrictions after fulfilling the requirements; when we seek to become a civil economy and a market economy, only then, when the strong dinar is not allowed to meet its needs in dollars, will the economy be weakened.”

Abdul-Mahdi pointed out that this “would result in [existing] capital drifting away and impede other capital from flowing in. It will shake the world’s trust in the dinar and weaken its value, thus hindering the dinar from achieving stability locally and [entering] foreign markets. [Subsequently], the dependency on foreign markets will be further highlighted; inflation, corruption and fraud will ensue.”

Abdul-Mahdi believes that there are many examples which support his views. These include “the companies that are hastily established abroad and are ready to provide whomever wishes with ‘bills’ ratified by embassies and companies, in order to facilitate monetary transfer for the purposes of importing [dollars].” He also notes [that there are those who] “acquire US dollars through collecting passports. These passports are not for actual travel purposes, but to benefit from the difference in exchange rate. [Whomever holds an Iraqi passport can buy $5,000 a month from private banks at a special rate.] All of this is accomplished via additional charges that the economy and Iraqi citizens will pay for.”