Iran has been accused of meddling in Iraqi financial affairs after the Iraqi dinar lost value against the dollar at the beginning of March, writes Omar al-Shaher. 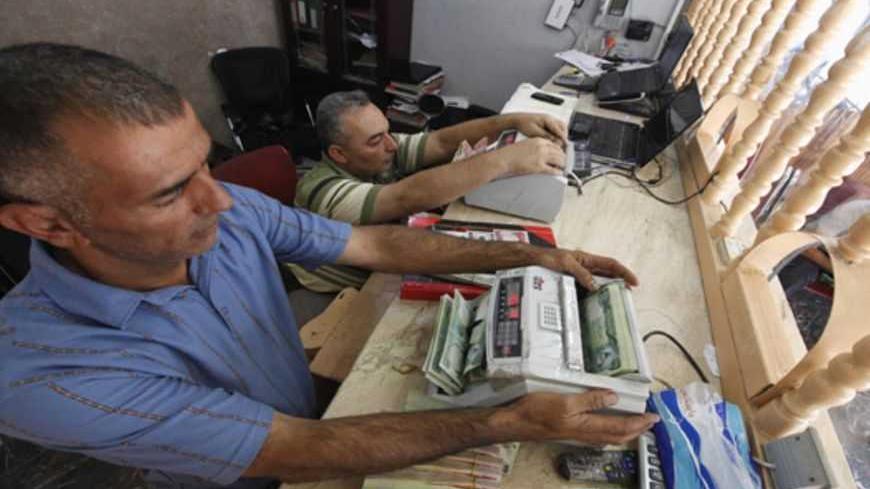 There were conflicting accounts of the reasons for the rise in the value of the US dollar against the Iraqi dinar earlier this month. Politicians and economists have said that Iranian companies boosted the value of the dollar against the dinar by entering the Central Bank of Iraq’s (CBI) auction for hard-currency sales and buying large quantities in order to smuggle them into Iran. On the other hand, a former senior official at the CBI said the rise is linked to increased government revenue from oil sales, leading to an increase in government spending.

The weekly bulletin released by the CBI says 1,260 Iraqi dinars are now trading to the dollar, a level not been reached since last year.

A member of the Iraqi parliamentary finance committee said the value of the dollar increased against the dinar because some Iraqi banks have stopped converting dinars to dollars and have sold dollars to exchange companies at prices favorable to the banks.

Ahmed al-Alwani, head of the Iraqi parliament’s economic committee, said Iran’s need for hard currency as a result of international sanctions has prompted Iran to mobilize Iraqi partners to help the country get dollars through the CBI auction.

Economist Khaled Haidar said Iraqi brokers are buying hard currency at the CBI auction and selling it to Iranian companies, which then smuggle the currency into Iran in order to address its substantial hard-currency deficit.

He added: “This has increased the demand for the dollar at the CBI auction.”

It seems that the apparent role of Iranian companies in Iraq’s dollar sales has pushed the CBI to tighten control procedures for the sale of hard currency, which has led to reduced quantities of dollars being sold.

In 2012, the CBI sold at its auction $200 million to 15 private bank customers. This year, the amount has fallen to $70 million. This has resulted in a gap between supply and demand, and led to the rise in the value of the dollar at the CBI’s official auction and in the gray market.

Ahmed Bureihi, the former senior official at the CBI, denied that there was any suspicion of political involvement in the rise of the value of the dollar in the Iraqi market.

He added: “Iran has nothing to do with the increased exchange rate. The CBI sells foreign currency to Iraqi customers to be used in funding trade transactions outside the country.”

Bureihi said he believes that “there are Iraqi traders who defraud the CBI and provide counterfeit documents of virtual imports to Iraq. However, they are [exchanging goods with] Iran and Syria — their commercial targets — trying to maximize their profits. This has nothing to do with political issues.”

He said, “No supervisory authority in Iraq has noted a recent increase in these traders’ activities, which means that their activities have nothing to do with the rise of the US dollar exchange rate.”

He added: “Politicians who spoke about Iranian companies smuggling hard currency coming from the CBI auction to Iran need to worry about resolving the chronic political crisis in Iraq and leave monetary policy to experts.”

He emphasized that “the control procedures over the outflow of currency from the CBI auction continue, yet the full control over this issue needs time.” He then added, “This is an issue that affects all countries in the world; the incentives are aimed at maximizing the traders’ profits.”