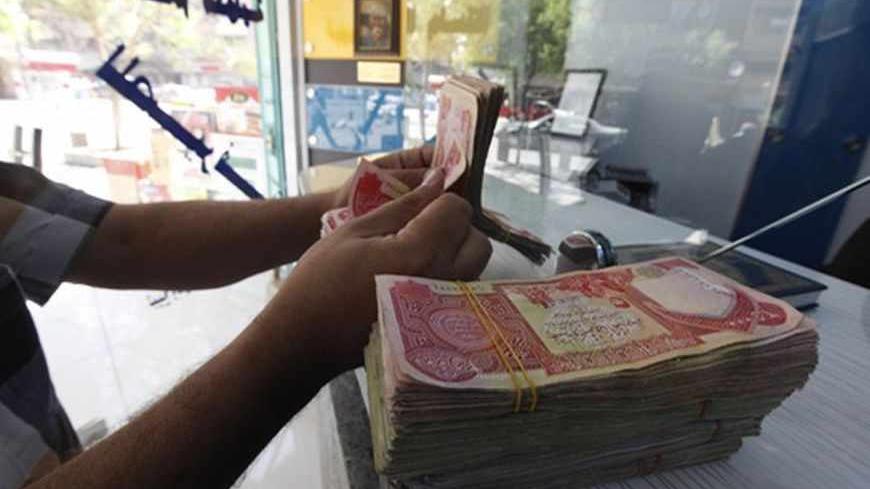 Political and economic Iraqi circles confirm the presence of extensive money-laundering operations in Iraq. Weak monitoring systems and political conflicts of interest, however, prevent the exposure of these operations. These same circles noted that talk of Iraq’s role in the laundering of Syrian money needs compelling evidence to be substantiated.

Ahmad al-Jabouri, a member of the Integrity Committee in the Iraqi parliament, said in a statement to Al-Monitor that the amount of money subject to laundering operations are around “20% of Iraq’s investment budget.” Iraq’s 2013 general budget is more than $115 billion, $46 billion of which are investment expenditures. According to Jabouri, money-laundering operations make up $9 billion per year.

Jabouri, an Iraqi member of parliament for the State of Law Coalition led by Prime Minister Nouri al-Maliki, said, “Money-laundering operations are carried out under the auspices of key officials in the state or local government,” adding: “They are smuggling money they have acquired through dubious deals and fake projects in a way that has gone unmonitored. They establish projects and buy real estate overseas, registering them in the names of their relatives.”

Jabouri explained the breakdown of the 20% of Iraq’s total investment budget that is subject to money laundering. He said: “10% comes from the value of any weighty contract a company [might] acquire. This percentage is given to brokers, who are primarily representatives of governmental officials. Then, there is money paid by the parties that have been awarded the contracts in the form of [bribes] to support militias and armed groups.”

According to Jabouri, “Administrative and financial corruption is present in state institutions and cannot be tackled, except through legal measures that require evidence.” He noted, “Corrupt officials are modernizing their techniques by making use of the laws in their favor.”

Jabouri revealed that the parliamentary Integrity Committee, one of the financial monitoring bodies, lacks communication channels with other monitoring bodies such as the anti-money-laundering unit of the Central Bank of Iraq and the Federal Board of Supreme Audit.

When it comes to the role Iraq plays in laundering of Syrian money, Jabouri affirmed, “This issue needs careful consideration from the part of economic experts and bankers.”

He continued, “Yes, there is openness between both countries, as everybody knows; yet, we cannot confirm the story of laundering Syrian money without compelling evidence.”

Abdel Hussein al-Ankabi, an economic adviser to the Iraqi prime minister, refused to comment on the issue of money laundering in Iraq. Mazhar Mohammad Saleh, the former assistant to the Central Bank of Iraq’s governor, said in a statement to Al-Monitor, “Many Iraqi financial officials do not differentiate between exporting and smuggling money.”

Saleh said, “Cash circulation takes two courses; the first is outside the banking entity, while the second is within bank regulations, to legitimize these funds.”

Talking about laundering Syrian money in Iraq, Saleh said, “I have no knowledge of this issue.”