Decades of war and international sanctions have greatly hindered Iraq’s oil production potential, an issue the current government is struggling to address. 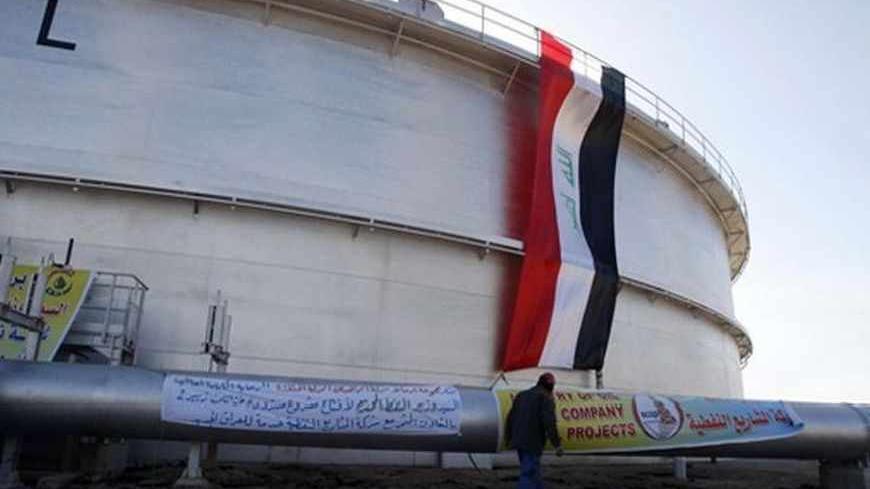 An employee of the state-run South Oil Company (SOC) walks by a new oil storage tank near the southern city of Basra, Jan. 14, 2013. - REUTERS/Atef Hassan

The Iraqi Ministry of Oil affirmed that Baghdad’s share in oil production will not be part of the OPEC specified quotas for 2014. The ministry said it was likely for Iraq to reach the required export rate in the next year.

Iraq is one of the founders of OPEC, an organization that brings together 12 oil exporting countries. Iraq's production quota — which was 3.8 million barrels a day — was suspended during the invasion of Kuwait as part of imposed international sanctions.

Assem Jihad, the spokesman for the Iraqi Ministry of Oil, told Al-Monitor, “The exclusion of Iraq from the ministerial decision of OPEC in regard to reducing production came as a result of the fact that Iraq already exports less than its quota requires.”

Jihad explained, “OPEC announced reducing the production of raw crude to 1.5 million barrels a day,” clarifying that Iraq will not be impacted because it “exports the oil outside the framework of specified quotas and it does not have a fixed share.”

Jihad added, “The Iraqi current crude production does not match the official reserve estimated at 115 billion barrels, since Iraq was banned for years after the Gulf War and the UN blockade on Iraq from exporting oil.” Jihad pointed out that the production rates “have not improved post-2003; therefore, Iraq remained far from achieving its real production capacity, even if the development in the oil sector continued at a normal pace.”

Talking about the production ceiling under normal circumstances, Jihad noted, “OPEC experts decide on it according to the reserve of each country,” and “even if Iraq was able to produce 4 million barrels a day by next year, as expected, its share will remain less than what OPEC would have specified if Iraq’s oil industry developed normally.”

Iraq is a leading country in oil production. The International Monetary Fund (IMF) puts Iraq as the second biggest oil producing country in OPEC, the world’s third international oil exporter and the world’s fifth in terms of reserves. According to the IMF’s 2013 annual report on Iraq, the expansion of Iraqi oil production is expected to increase by about 143 billion barrels in the medium term, rendering it one of the main contributors that provide the international market with oil, despite the challenges it went through. The country is dealing with financial hardships as a result of three decades of blockades and wars, and needs to transform its oil wealth into assets, on which the development and reconstruction processes continue to rely.

The share of OPEC in the international market will be reduced in 2014 as the US oil share will not allow the organization to benefit from the fastest escalation in international demand in four years.

In a statement to Al-Monitor, oil expert and former Iraqi Oil Minister Ibrahim Bahr al-Ulum ruled out the possibility of Iraq being included in the agreement of reducing the share of OPEC in the international market in 2014.

Ulum said that oil techniques are improving and production is increasing; the market is still in need of OPEC oil, especially eastern Asia. He reiterated, “There are no concerns about reducing the Iraqi share.”

Kassem Meshkati, a member of the parliamentary Oil and Energy Committee, said in a statement to Al-Monitor, “Iraq’s share according to the specified quota of OPEC amounts to 15% of its initial production capacity, which means that Iraq must produce 4 to 5 million barrels a day.” Meshkati stressed, “Iraq does not produce as much, with its production being at 2 million barrels or less per day.”

According to Meshkati, achieving the required production rate is related to “the development of Iraqi oil infrastructure.”

Meshkati mentioned, “Given the current oil infrastructure, I am afraid it is not feasible for Iraq to produce 4 billion barrels a day.” He then added, “The Ministry of Oil says it will produce this amount, yet with such infrastructure, I do not see hope.”