Iraqi police are unable to keep up with increasing drug smuggling from Iran, and Basra, the hardest-hit province, has neither a rehabilitation center for drug addiction nor the resources to prosecute drug-trafficking gangs. 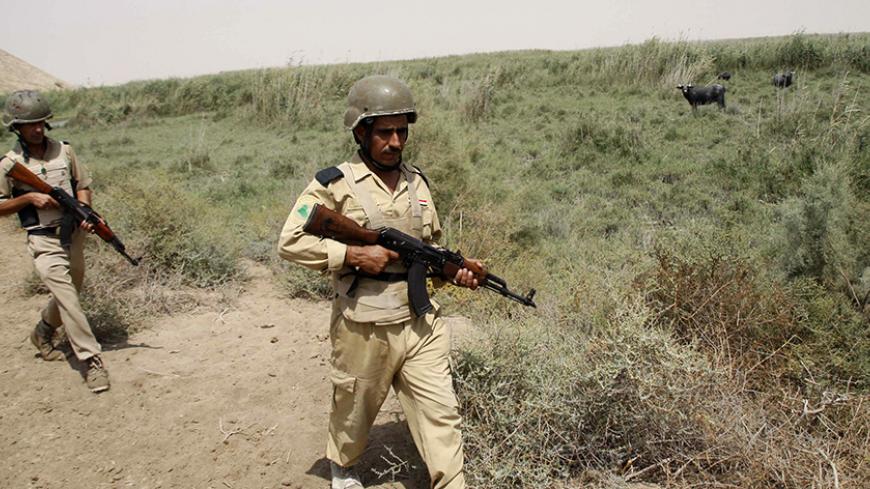 Iraqi border police officers patrol near the border with Iran in the southern province of Basra, Iraq, Sept. 4, 2010. - REUTERS/Atef Hassan

In the oil-rich city of Basra in southern Iraq, drug-trafficking gangs are gaining power. Through certain areas on the Iraqi-Iranian border, drugs come in from Iran to be consumed in Basra or smuggled to other Iraqi cities.

On Oct. 4, forces from the anti-drug office of the Basra police were able to arrest one drug dealer. However, local authorities are unable to touch major drug-trafficking gangs, because the local police lack the expertise and means to do so and thus only arrests middlemen and drug users.

The drug trade has been linked to several problems such as armed conflicts between gangs, murders, kidnappings and armed robberies. For instance, on Oct. 8, the Basra police reported that a young man was shot dead while another was injured as a result of an armed brawl between drug gangs. On Oct. 17, the Basra police also arrested two drug dealers with a significant quantity of marijuana and three guns.

Back on Aug. 25, Basra Police Chief Abdul-Karim al-Mayahi noted at a press conference, “Drug use has skyrocketed in 2016, and control is needed over the borders of Basra province to prevent drugs from entering.” What began as a provincial matter turned into a national priority as efforts to fight it gained great momentum at the security and defense committee meetings held at the parliament on Oct. 3.

The number of drug abusers arrested in 2016 increased by about 300% compared to 2015, when 261 people were arrested for drug violations. That number jumped to 780 just in the first eight months of 2016. The amount of narcotic substances seized by authorities jumped by almost 12 times during the last fiscal year. The problem poses a threat to the citizens of the province, especially the young men targeted by drug-trafficking gangs.

In 2016, the provincial authorities convicted 47 individuals of drug-trafficking and gave them various sentences, including life imprisonment.

An article published by The Guardian on Aug. 16 addressed the drug issue in Basra and how it became a booming industry in the province. Its proliferation indicates that a large mafia controls the drug market and might have enough weapons and money to pose a threat to the local authorities. The Zubair district in Basra province was found to be the biggest hub for trafficking and drug abuse.

Ahmed al-Sulaiti, spokesman for the Basra provincial council, told Al-Monitor, “The spread of drugs in Basra province is unusual, but today's youth, for several reasons, are resorting to narcotics or what is known as crystal [methamphetamine]. All of this is the result of many factors, most notably the social situation and the lack of education among some youth.”

Sulaiti complained about “the lack of resources in Basra province that are available in other countries." He said, "This impedes the province’s ability to help drug users get clean or catch the gangs promoting drugs,” adding, “Drug users are victims and they need a rehabilitation center, but Basra is still taking a traditional approach in this regard: either confinement or imprisonment, which may worsen the problem.”

On Sept. 7, the Iraqi authorities arrested an Iranian drug smuggler in the coastal area of Faw, near the Iranian border. The arrest led to other Iranian visitors to the holy shrines in southern Iraq being accused of bringing in drugs and selling them in the country.

Similar accusations also came from the head of the Wasit Court of Appeals, Judge Ghaleb al-Ghrebawi, who spoke about a number of drug dealers officially entering Iraq from Iran as “visitors.”

A colonel in the Basra police told Al-Monitor on condition of anonymity, “Local authorities in Basra arrest at least 10 drug users every day, but are unable to capture major drug gangs.” He added, “The largest amount of seized narcotics was 7 kilograms [(15.4 pounds) of marijuana], smuggled from Maysan province in southern Iraq, which also has geographic borders with Iran.”

On Aug. 26, Basra Governor Majed Nasraoui announced the arrest of more than 1,000 drug abusers and dealers, saying, “The individuals we have arrested come from different backgrounds. Most of them are unemployed citizens between 20 and 45 years old, in addition to a few women.”

He added, “There are many reasons that led to the aggravation of this phenomenon, including unemployment and the weakness of the Iraqi border in Basra, compared to neighboring countries, in addition to the easy access to materials used to produce drugs such as crystal, which can be manufactured locally.”

Not all drugs found in Basra came in from Iran, as there are labs in the city producing methamphetamines and selling them to users. On May 5, Basra security forces were able to seize one such lab, in which two non-Iraqis worked producing drugs.

Basra has found itself in a dilemma, with no rehabilitation center for drug addicts and no means to prosecute drug-trafficking gangs, which could be affiliated with political blocs or parties.

Basra's situation is alarming, as the drugs produced or smuggled there could reach other Iraqi cities including the capital, and such proliferation could deepen the Iraqi crisis and create a new generation of drug users.