Is Iraq turning into a drug-producing country?

In a critical development, several plants for producing drugs have been found in Iraq’s cities. 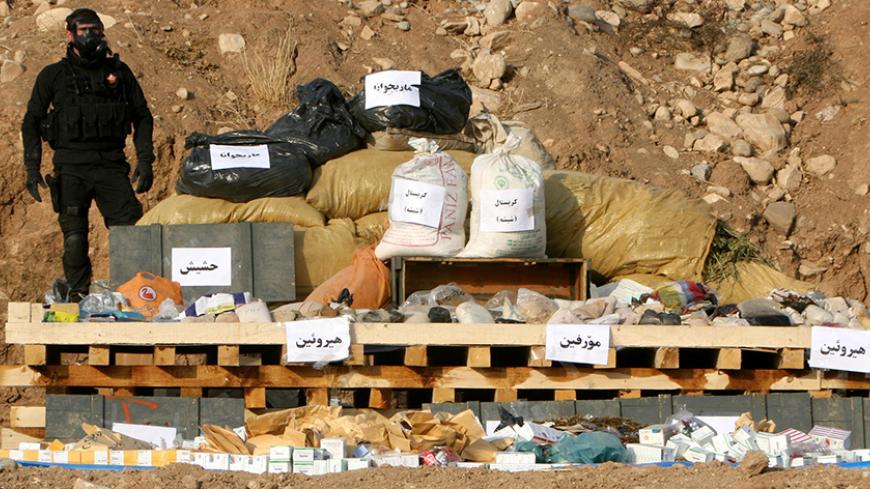 A member of the Iraqi Kurdish security forces stands next to a pile of seized drugs about to be burned in Erbil, Iraqi Kurdistan, Oct. 29, 2013. - SAFIN HAMED/AFP/Getty Images

BAGHDAD — A Nov. 23 report by specialized judges revealed the establishment of plants to produce Krystal — the local name of crystal methamphetamine or crystal meth. The findings suggest that Iraq is changing from a corridor for drugs between neighboring countries into a producer of narcotics, taking advantage of poor regulatory procedures on the porous border.

This explains the increased arrests of drug dealers and users, most recently on Dec. 20, when the Ministry of Interior announced the arrest of a group of six people who were trafficking narcotics in a horse stable in the Abu Ghraib area, west of Baghdad.

A source in the national security apparatus confirmed Nov. 19 the presence of plants used to produce drugs, such as crystal meth, in Basra and Maysan provinces in the south. The people running the plants mix narcotic chemicals that are smuggled from abroad with other materials. The source said that this has turned Iraq into a producing country of narcotics.

Faeq al-Sheikh Ali, a member of parliament, said Oct. 25 that “cannabis is cultivated in opium farms in south Iraq under the patronage of political parties and influential armed groups,” which gave the phenomenon a political dimension, causing much controversy about political parties using drug profits for political money.

Ali’s statements prompted Iraqi parliament's Agricultural Committee to declare Dec. 12 that it will “investigate the information about the cultivation of some crops used for the manufacture of drugs, especially opium in the south of Iraq.”

In an interview with Al-Monitor, Ali al-Badri, a member of parliament on the Agricultural Committee, denied claims about opium cultivation in southern Iraq at the hands of political parties and groups. “These reports are not accurate. The cultivation of such narcotics requires production means and lands for cultivation. The presence of some individual cases does not mean Iraq is now producing drugs,” he said.

However, it appears that Badri’s statements are not in line with what is happening on the ground, especially in the peripheries of Erbil in the Kurdistan Region, where security forces raided the first drug farm on Oct. 13, with narcotics estimated at a value of about $1 million.

Badri and the Agricultural Committee’s statements that deny the production of drugs in the country contradict the Oct. 5 statements of sources in the Sharqat district in the north, saying that the security forces destroyed 16 acres of opium.

This raises questions about why Iraqi parties are denying drug production in the country. Sources confirmed that members of the Islamic State (IS) were cultivating opium in Sharqat to finance their operations. The sources said that opium was used to extract heroin in the laboratories of the University of Mosul, which fell under IS control in June 2014.

Salah Hassan, brigadier general in the Iraqi Interior Ministry, told Al-Monitor, “Drug cultivation and production is happening in the areas under IS control,” which is further proof of the incidents in Sharqat. This raises the speculation of drug cultivation and narcotics marketing in Kurdistan, as well. Given the area’s mountainous nature and rough terrain, it is difficult for security services to detect the plants.

Amer Habib, an academic in agricultural sciences from Babil, told Al-Monitor that opium cultivation is not widespread in the center and south of the country because “this kind of cultivation requires a relatively cold atmosphere, which is not the case in the central and southern areas. But it is still possible.”

“These cultivation farms need special care and to be hidden from the public eye, which can be done in these areas. Therefore, there might be individual attempts to grow narcotic plants, but this cannot be considered a widespread phenomenon,” Habib added.

In the same context, Sabah al-Saadi, a member of parliament’s Security and Defense Committee, told Al-Monitor, “Reports on drug manufacturing in Iraq are hyperbolic, but one can say that this industry is being launched. The number of drug dealers have increased each year after 2003, while the spread of IS in Iraq increases the chances of local production should the consumption of use of drugs remain high. This could encourage smugglers to start manufacturing inside the country.”

In further evidence to Saadi’s statement, the Department of Mental Health in Basra General Hospital called upon the state on Jan. 2 to establish a specialized center for combating drugs, especially with the increased use of crystal meth.

Ignoring the signs and signals that emerge every now and then in Iraq could cause Iraq to become a country producing and exporting drugs, leading to more victims of addiction and rising numbers of drug traffickers. Iskandar Watout, a member of the Security and Defense Committee, told Al-Monitor that he has been calling for the “intelligence apparatus to take action and impose tight measures and apply Iraqi law, banning the cultivation and production of drugs and punishing groups trafficking and using narcotics.”