Drug cultivation, trafficking on the rise in West Bank

Despite increased efforts to counter it, drug cultivation and trafficking has increased in the West Bank in the first quarter of 2017 compared to previous years. 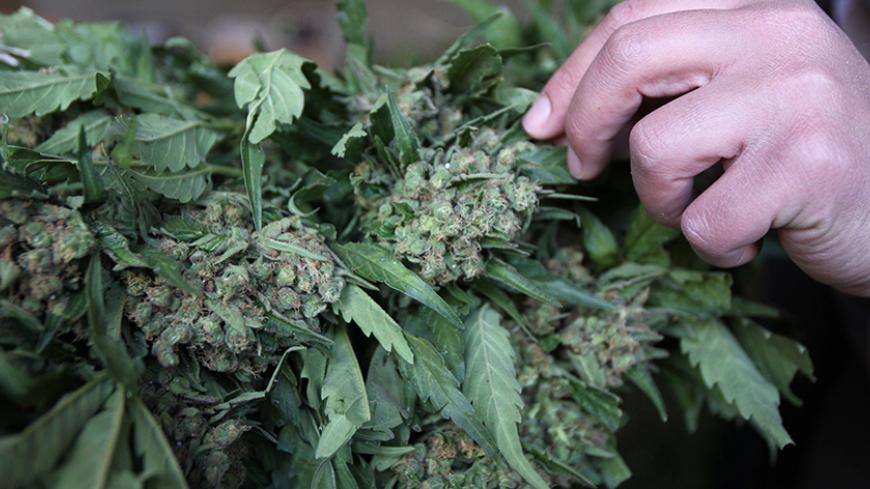 A Palestinian policeman shows one of hundreds of seized marijuana plants in the West Bank city of Hebron, March 31, 2015.

RAMALLAH, West Bank — The Palestinian police said that it seized different types of drugs worth 60 million Israeli shekels ($16.5 million) in the various provinces between the beginning of January and mid-March.

Speaking to Al-Monitor, Palestinian police spokesman Lt. Col. Luay Irzikat said that drug cultivation and trafficking has increased in the West Bank in the first quarter of 2017 compared to previous years.

He said, “The confiscated drugs in 2016 are worth 5 million shekels [roughly $1.40 million], which is a small amount compared to the first quarter of 2017. This indicates that investments increased in this field.”

On Feb. 27, the Palestinian police conducted the largest anti-drugs crackdown in its history, in Dura, south of Hebron in the southern West Bank. Police discovered a drugs farm and nursery, and a four-story factory that is fully equipped to produce illegal drugs. According to Irzikat, seeds were grown using advanced techniques such as the appropriate lighting, fertilizers and chemicals for the production of drugs.

He noted, “The factory in Dura belongs to a Palestinian drug trafficker hailing from the city of Beersheba, inside the Green Line, who funds and provides the factory with equipment. Those arrested during the crackdown are from the West Bank. The general prosecution is currently investigating them, but the drug lord is still a fugitive inside the Green Line.”

The police statement raised concerns over the presence of organized gangs operating in this field. Irzikat said, “Organized gangs inside the Green Line tend to organize the cultivation of narcotics in the West Bank by seducing citizens with money. Individuals from inside [the Green Line] — especially from Beersheba — are connected to most of the confiscated narcotics.”

Drug traffickers and gangs from inside the Green Line are investing in the narcotics business in the West Bank, which may explain the increase in confiscated products. Irzikat said in this regard, “In light of the tight control over illegal drug cultivation in Israel and tightened security measures on the border with the Sinai Peninsula and Lebanon — which has reduced the smuggling [of drugs] — traffickers seem to believe that the West Bank, especially Area C, is a safe haven.”

Area C, which consists of nearly 60% of the West Bank territory, is under full Israeli control. Traffickers are attracted to this area, especially to the Hebron governorate, north of Beersheba city, which is located on the Green Line. This makes it easy for traffickers to move, smuggle drugs, hide forensic evidence and escape inside the Green Line, making it hard for them to be prosecuted, according Irzikat.

In answer to the question of the Palestinian Authority's (PA) ability to arrest individuals inside the Green Line, Irzikat replied, “We try to arrest them before they cross the Green Line. Yet once they escape, a security dossier proving their involvement in drug trafficking will be prepared. The dossier is then handed over to the military liaison to contact the Israeli side, which in turn takes the necessary measures to either arrest them and hand them over to the Palestinian police or keep them in Israeli jails.”

He added, “Israel hands over suspects who have escaped to Israel from the West Bank to the Palestinian police.”

There are also concerns that drug traffickers in the West Bank and inside the Green Line introduce new and more dangerous types of drugs to the Palestinian market. Irzikat said, “Hash and hybrid cannabis are the most common types of drugs seized. The most dangerous crackdown was carried out in Anata town on the outskirts of Jerusalem on Jan. 14, where nearly 3,000 heroin pills [roughly 3 pounds] were confiscated. The largest amount of heroin seized in the past did not exceed 500 grams [1 pound].”

Commenting on the profits, he said, “There are huge profits to be made, which explains the use of villas and luxury buildings to manufacture drugs. These profits go to the drug lords who fund the nurseries.”

The PA seeks to fight drug trafficking, not only by prosecuting drug users and dealers but also by tightening legal sanctions. Based on this, PA President Mahmoud Abbas approved the Anti-Narcotics and Psychotropic Substances Law on Nov. 4, 2015.

Article 21 of the law states, “Whoever produces, manufactures, imports, exports, transports or stores any psychotropic substances or narcotics, or whoever grows any plant to produce any psychotropic substances or narcotics, or imports, exports or deals with such plants, shall be sanctioned hard labor in prison for a period not less than 10 years and a fine of not less than 10,000 Jordanian dinars [$14,000] and not more than 20,000 Jordanian dinars.”

Commenting on the large quantity seized despite the enactment of the deterrent law, Irzikat said, “The law will serve as a deterrent to drug traffickers once enforced in all Palestinian courts. Unfortunately the law is being enforced only in some of the courts, while all courts need to speed up its implementation. Once all courts abide by it, deterrent judicial rulings will start to be issued.” This means that the judicial authority is required to conduct training classes for judges on the newly enacted laws.

The enactment of anti-narcotics law in Palestine seems to be insufficient in countering this scourge, in the absence of any national strategy by all institutions concerned with combating drugs and the lack of PA control over Area C, which traffickers are taking advantage of.