In the first ruling of its kind since the creation of the PA, a military court in Gaza City has sentenced two Palestinians to death for dealing drugs, worrying human rights groups. 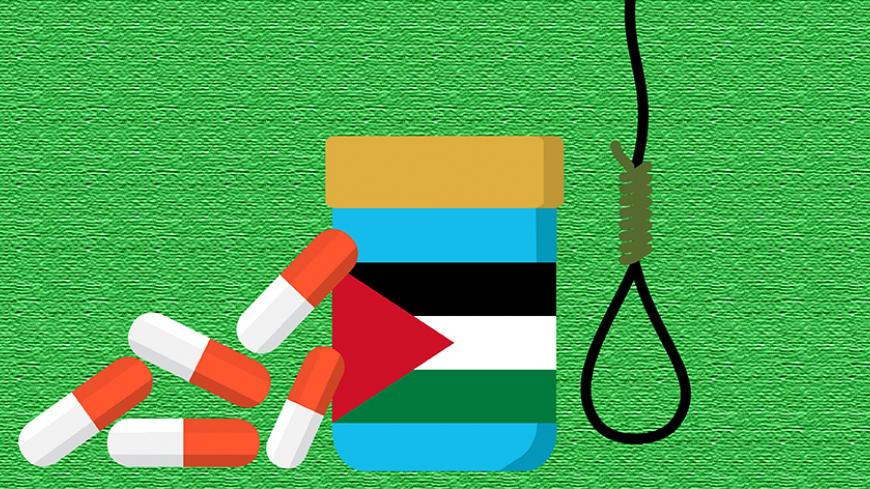 The planned execution of drug dealers in the Gaza Strip is meant as a deterrent to others, but it has been slammed by human rights groups. - Hugo Goodridge/Al-Monitor

GAZA CITY, Gaza Strip — In the first ruling of its kind since the creation of the Palestinian Authority (PA) in 1994, a military court in Gaza City sentenced two Palestinians convicted of selling drugs to death on March 18. The court condemned others convicted of the same charges to prison with hard labor. The sentences were welcomed by many Palestinians but slammed by human rights groups.

According to the charge sheet published by the Ministry of Interior, based on intelligence received, the Palestinian Anti-Narcotics Department arrested the two while in possession of large quantities of drugs they had smuggled across the Gaza Strip’s southern border. A 2013 law on psychotropic substances allows for the execution of drug dealers in the Gaza Strip.

The head of the military court, Nasser Suleiman, told journalists on March 18 that those condemned to death had previous convictions of drug dealing but had committed the same crime again, meaning that the previous punishments had not deterred them.

He said the military court was hearing 30 cases of drug dealing. The cases had been heard previously by civilian courts, but three months ago, they were transferred to the military court as drugs are considered a threat to public security. As the crimes involve smuggling through the border areas, said Suleiman, they should be under the control of the National Security Forces.

Gaza’s Interior Ministry spokesman Iyad al-Bazm told Al-Monitor the drugs are primarily smuggled into the Strip from Egypt through its southern border and from Israel through its eastern border, and that security measures by the Interior Ministry had thwarted the delivery of large quantities of narcotics and resulted in the arrests of those selling them.

The Ministry of Interior said that by the first quarter of 2017, the ministry had seized about 1,200 packages of hashish and 400,000 Tramadol pills.

Bazm said that 2015 and 2016 saw a rise in drug smuggling into Gaza, and the ministry would not allow Palestinian society to be destroyed from the inside by such substances. Every effort would be made to protect the youth from the dangerous phenomenon, he added.

Swerky urged the court to carry out the death sentences as soon as possible to deter others thinking of smuggling such substances into Gaza. Despite the large quantities of drugs that have been seized over the past months, he claimed that addiction levels have dropped. Swerky declined to give figures for drug abuse in the Strip, saying only that rehabilitation centers and primary care clinics run by the Interior Ministry had successfully treated many addicts who checked themselves in for treatment.

Hundreds of activists and citizens in Gaza organized protest vigils on March 19, calling for severe punishments for drug dealers and welcoming the harsh sentences.

“We are against the death penalty and the sentences issued on March 18, which represent an attack on the civilian judiciary by the military judiciary, because drug cases should be tried before civilian courts,” Issam Younis, the head of Al Mezan Center for Human Rights, told Al-Monitor.

Younis called on the Gaza authorities to repeal the sentences and examine why those convicted had committed their crimes. He said the Gaza Strip and the West Bank face partition, blockade, unemployment and rising poverty, all of which create fertile ground for criminality.

He said that drug trafficking is a crime that no one can condone, and those guilty of it must be punished — but within the framework of laws that preserve human rights. He also expressed doubt over the sentences' efficacy, asking, “Does the death penalty, which needs to be approved by President Mahmoud Abbas before it is carried out, deter crime?”

The Palestinian Center for Human Rights protested that no law allows for the death penalty for drug possession and that the court had overstepped by hearing a case that was entirely civilian.

In a March 19 statement, the organization said, “We express our deep concern over these dangerous developments in the use of the death penalty, and we emphasize the danger of using it or approving it in drug cases, especially in light of the lack of fair trial guarantees and the many reports of widespread torture during interrogations, especially in connection with drug crimes.”

The organization has registered 35 executions since the establishment of the PA in 1994, 33 in Gaza and two in the West Bank. They have included various types of cases ranging from spying for Israel to homicide, and most were carried out without the approval of the Palestinian president.