Hamas in the Gaza Strip has come under criticism for referring civilians accused of drug use and traficking to the military judiciary. 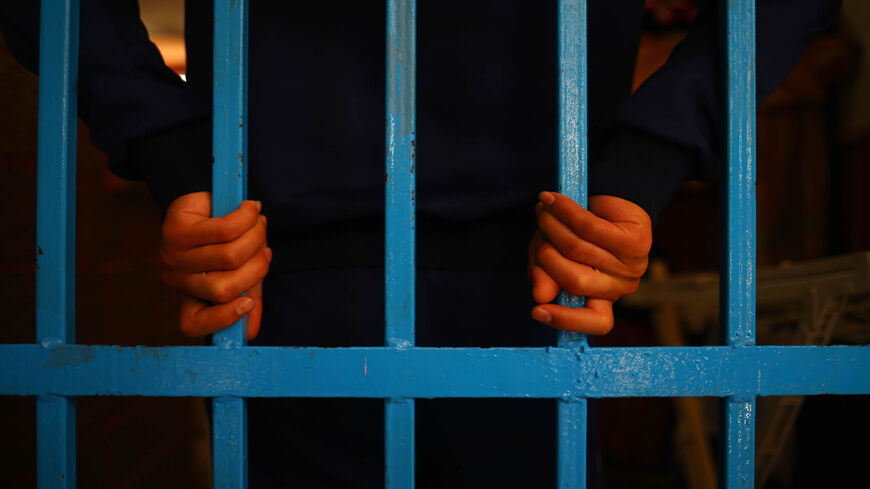 A drug addict stands behind bars at a Hamas-run prison in Gaza City, Gaza Strip, May 10, 2017. - Mohammed Abed/AFP via Getty Images

GAZA CITY, Gaza Strip — The Hamas-run Military Justice Commission in the Gaza Strip announced Oct. 21 that 13 judicial rulings have been issued against drug dealers, including one death penalty.

It said during a press conference in Gaza City that narcotics found and seized by the Anti-Narcotics Department have been destroyed as part of the government’s efforts to combat drugs.

This comes as human rights organization have condemned the Hamas government for issuing death sentences against Palestinians, saying such rulings contradict the legal obligations of the state of Palestine’s obligations under international conventions, including the 1989 Second Optional Protocol to the International Covenant on Civil and Political Rights 1989 — which is aimed at abolishing the death penalty. Palestine joined this covenant in 2018.

During the Military Justice Commission’s press conference, hundreds of thousands of different types of narcotic medical drugs, including 197 kilograms (434 pounds) of hashish and 181 kilograms (399 pounds) of banjo and marijuana, were displayed before destroying and burning them under the supervision of committees affiliated with the military prosecution.

The head of the Military Justice Commission in the Gaza Strip, Nasser Suleiman, confirmed during the conference that the commission has put in place a set of measures to speed up the trial of those accused of trafficking drugs through closed military zones on the border.

On Oct. 24, the anti-narcotics police announced the seizure of 18 hashish stocks and 300 narcotic pills in Rafah and al-Wusta governorates, and the arrest of two dealers.

Mohamed Abdel Wahab, legal expert at the Palestinian Center for Human Rights, told Al-Monitor that drug trafficking and trade cases fall under the civil courts’ jurisdiction, because they consist of civil cases.

He condemned the trial of civilians before the military justice as it violates the Palestinian Basic Law, specifically Article 30 that states, “Each Palestinian shall have the right to find sanctuary in the legal system.”

Abdel Wahab pointed out that after Hamas took control of the Gaza Strip in 2007, the movement issued Military Justice Law No. 3 of 2008, which allows the interior minister alone to refer any case to the military justice, without any limitations or conditions.

“The Hamas government is basically violating the law it itself issued, because there is no interior minister in its current government. The ministry’s undersecretary is facilitating the work of the ministry, and therefore [Hamas] is committing a second violation,” Abdel Wahab said.

He noted, “It is not within the powers of the undersecretary to sign decisions to refer cases to the military justice.”

He stressed that political agendas are being implemented under a legal guise, and noted that since Yahya Sinwar was elected as the head of Hamas in Gaza in 2017, he sought to ​​deter drug dealers and collaborators with Israel by tightening judicial sentences, especially by issuing death sentences.

Abdel Wahab added that the Hamas government is trying to issue verdicts that are popular among the public, but these rulings were found not to deter crimes, in addition to the fact that they violate the Palestinian law.

He stressed that in some of the military justice cases, the lawyers of the defendants did not attend the trial. He explained that the PLO's Revolutionary Penal Code of 1979, on which the military trials are based, cannot be used as a basis today, because many of its articles do not grant the defendant the right to defend himself.

He also mentioned that defendants are often subject to torture to obtain a confession, which contradicts Hamas’ claims of guaranteeing a fair trial.

He said that the Palestinian Center for Human Rights is against drug trafficking and dealing, but judicial justice shall not be bypassed under the pretext of protecting the community and deterring criminals. He said he was surprised at the commission’s remarks on the approval of procedures that would speed up the trial of defendants in drug trafficking cases, and expressed doubts that these procedures would grant defendants sufficient rights to defend themselves.

Ibrahim Habib, an expert on Palestinian national security, told Al-Monitor that the display of narcotics during the press conference aims to show citizens the efforts the Anti-Narcotics Department is making to counter the spread of drugs, more than it seeks to deter drug dealers.

He noted that Israel is seeking to flood the Gaza Strip with drugs by bringing in drugs through a number of merchants. This is why, he explained, the Gaza government has tightened control over the goods imported to the besieged enclave and held accountable the merchants who are proven to be involved in the entry of these narcotics.

Ibrahim al-Madhoun, a political analyst close to Hamas, told Al-Monitor that the display of the drugs aims to raise awareness among the youth and deliver a message to Israel, whereby Hamas is cracking down on drugs in cooperation with the Gaza Interior Ministry.

He stressed that Israel’s repeated attempts to flood Gaza with drugs have failed, saying that strict sentences may deter anyone who seeks to harm the Palestinian people through drugs.

Madhoun said that the youth use drugs because of the difficult economic situation in the Gaza Strip, the Israeli blockade, the repeated wars on Gaza and the high unemployment rates.