Depressed by the lack of employment opportunities, many Gaza graduates are turning to the drug Tramadol as a way to escape. 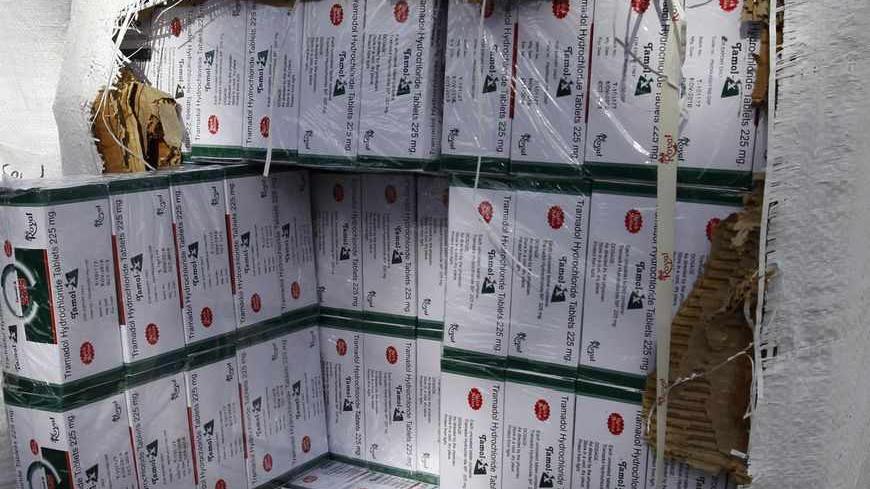 Part of a haul of the prescription drug Tramadol seized by police, March 3, 2011. - REUTERS/Chris Helgren

Hassan recounts how he fell into the swamp of addiction to Tramadol, a habit-forming drug prohibited in the Gaza Strip. He ascribes it to the absence of job opportunities after he completed his university education nearly two years ago.

The 24-year-old Hassan graduated from Al-Azhar University in Gaza with a major in business administration. Despite this, he has been forced to join the long lines of unemployed workers, who account for 45% of Gaza’s labor force. Matters worsened as his economic, social and psychological problems deepened to the point where he found that his life had become unbearable.

"After I graduated from university, I spent a long time looking for work, but to no avail. It dragged on until I started to feel that I was a burden on society. I was living in an endless cycle of psychological anxieties," Hassan says. He recounts details of his addiction to Tramadol pills to Al-Monitor, saying: "One of my friends gave me a green-colored pill; he said it would make me forget my troubles, and relax me. I took it without hesitation. At first I felt a severe headache that swiftly turned to relief. I couldn't feel any of the problems around me anymore."

Tramadol, or "al-Tramal" as it's popularly known, is a narcotic substance considered on par with codeine. It is used to alleviate pain by inhibiting the nervous system. It also acts as an effective palliative for sharp or chronic pains in cases where the patient is suffering from unbearable agony. However, it is increasingly being abused, including among university graduates, who fall into dependency on these drugs. This rising tide of addiction may be ascribed to harsh living conditions, the scarcity of job opportunities and a bleak economic outlook.

"I really took to the pills. At the beginning they allowed me to relax psychologically. I asked my friend for more, [but] he conditioned it on paying in advance. Due to the difficulty of my material situation, I was forced to steal money from my father so that I'd be able to afford them. Since then, I became addicted to the pills. The more I took, the more I wanted," Hassan says.

Hassan was arrested by the police, and languished in jail for a period of two months. At the time, he underwent a number of psychological rehabilitation sessions that helped him to cast off his Tramadol addiction. He succeeded at first, but after leaving he came up against the same grim reality once again, which again drove him to seek out the pills.

Hassan is one of many unemployed young people who have fallen prey to Tramadol pills because of the scarcity of job opportunities as well as the high levels of poverty prevalent in Palestinian society.

The labor market in the Gaza Strip is incapable of absorbing the thousands of young men and women who graduate into its ranks every year. There are now nearly 120,000 unemployed university graduates, according to statistics recently published by the Gaza Labor Ministry.

Educational expert Dardah al-Shair believes that the principal reasons driving university graduates to dependence on narcotics like Tramadol is the lack of job opportunities, the rising tide of unemployment, and the harsh economic conditions, in addition to the presence of disreputable individuals who promote the use of such pills.

In an interview with Al-Monitor, Shair said: "University graduates' exhaustion from grappling with the anxieties of searching for work [drives them] to Tramadol; it is a form of withdrawing and disassociating themselves from the real world." He noted that addiction to this drug is wreaking havoc on the addict’s social life and future, as well as preventing him from participating in the course of society's development.

The underground tunnels scattered beneath the border separating the Gaza Strip from Egypt have become a major source for smuggling Tramadol, prompting the government in Gaza to impose tighter supervision over those tunnels. Despite this, tightened oversight has so far yet to succeed in preventing the narcotic from circulating among Gaza's youth.

In addition, the Ministry of Health in Gaza has banned pharmacies in Gaza from selling Tramadol to patients or ordinary citizens without a doctor's prescription. Yet the imperatives of business and the desire to earn a profit have pushed some pharmacies to sell it even without a prescription.

Ashraf Abu Mahadi, the general director of pharmacology in the Ministry of Health in Gaza, explains that Tramadol used in this manner affects the individual’s health, including side effects on the nervous and respiratory systems.

Speaking to Al-Monitor, Abu Mahadi added that official supplies of Tramadol can be obtained through medical prescriptions subject to complete oversight by the ministry. But a number of pharmacies are violating the ministry's directives, and will be subjected to strict punitive measures.

The Interior Ministry in Gaza has also imposed stiff penalties for anyone caught selling or in illegal possession of Tramadol pills. Often anti-narcotics police units announce that they have seized significant quantities of pills that have reached Gaza illegally. The most recent such operation witnessed the seizure of roughly 290,000 Tramadol pills early last May. This had been preceded by the seizure of 65,000 pills last March. They had been destined for Gaza City, having been transported through the tunnels along the border.

Gaza police spokesman Ayyoub Abu Shaar stresses that the illegal trade in Tramadol has been banned, and those caught engaging in it are arrested on the spot. He points out that "this phenomenon has become fairly widespread in our society, unfortunately, and it is clear for all to see. The police are fighting against it with all the means at our disposal."

Further aggravating the spread of these narcotics is the fact that Tramadol has not been officially classified by Palestinian law as a narcotic, according to Abu Shaar. "We in the police are attempting to gain approval from the legislative council to classify these pills as narcotics. This and similar steps will aid us in combating its spread," he said.

Abu Shaar explains that Tramadol gets into Gaza through "the underground tunnels and the official crossing points," stressing that the police are vigorously trying to combat this.

Despite the government's emphasis on all things concerning Tramadol, pharmacist Bahir al-Safdi said all these measures will not put an end to the Tramadol trade, for the simple reason that there are any number of ways to deliver and sell it to those who wish to acquire it.

He told Al-Monitor, "despite the fact that most pharmacies abide by the government's decisions banning the sale of Tramadol without a medical prescription, some continue to sell it in order to turn a profit." Nevertheless, Safdi states that pharmacies are not the only source for Tramadol users.

He explains that these drug smugglers use various means to transport the pills, hiding them in places neither inspections nor oversight can see. He also noted that "suitcase dealers" are the most significant means by which these drugs are transported; they are most commonly sold to [the dealer’s own] friends and acquaintances.

He notes that Tramadol dealers generate significant profits, while each pill is sold for seven Israeli shekels, or about $2.

Safdi notes that the pills cause many adverse side effects such as vertigo, nausea, headaches, constipation, rash, loss of appetite, and schizophrenia. Prolonged use can also result in kidney failure and an enlarged prostate.

The Interior Ministry in Gaza announced the launch on June 12 of the national campaign to combat Tramadol, a preventative educational awareness campaign to inform people of the importance of keeping their children away from drug abuse.

Rasha Abou Jalal is a writer and freelance journalist from Gaza specializing in the political news, humanitarian and social issues associated linked to current events.