Even with the closure of most tunnels between Gaza and Egypt, drugs such as Tramadol are still finding their way onto Gaza’s streets. 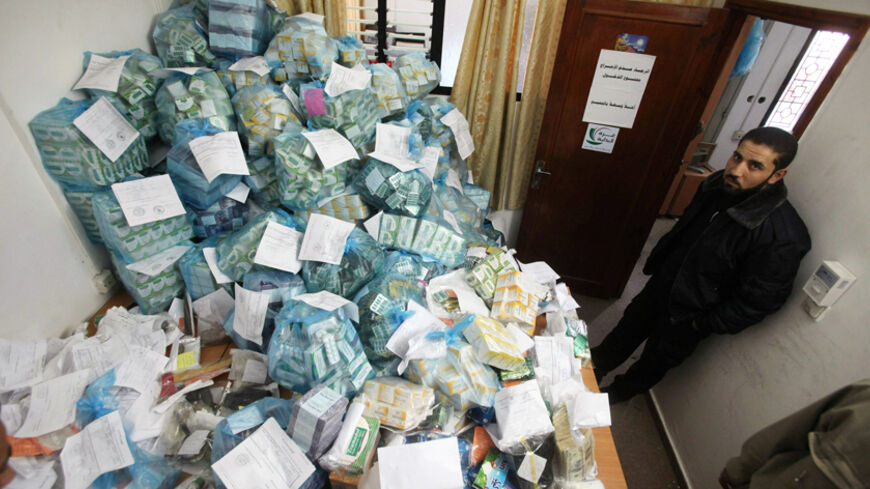 A member of Hamas' security forces stands next to plastic bags filled with confiscated drugs at a storage room in the prosecutor's headquarters in Gaza City, Dec. 2, 2009. - REUTERS/Mohammed Salem

RAFAH, Gaza Strip — Drugs are still finding their way into the Gaza Strip underground, despite Egypt closing the majority of the smuggling tunnels along its border with Gaza in 2013. Wael Awaja, director of the Drug Enforcement Administration (DEA) in Palestinian Rafah, alleged that although the Egyptian army had destroyed the tunnels permitting food and merchandise to reach Gaza residents, it kept open the tunnels that allow drugs to flow into the territory.

In an interview with Al-Monitor, Awaja accused Egyptian authorities of routinely flooding Gaza with drugs, calling it an intended and clear policy. Awaja said, “The tunnels are adjacent to the southern border, and their security control falls within the Egyptian and Israeli sides and cannot be easily accessed by us. They are a danger to our security personnel, but this does not mean that there hasn’t been significant efforts to eliminate the drugs, whose numbers have dropped dramatically.”

Awaja said his organization seized a number of the main drug dealers in Rafah, which decreased the amount of drugs being distributed. “We recently caught a large number of big dealers in Rafah. For example, a few days ago we captured two dealers with 3,500 boxes of Tramadol, which totaled 350,000 pills, in addition to 13,000 ‘happy’ pills, which were smuggled through the tunnels,” said Awaja. Even so, he added, “Our fight against drugs, and pills in particular, is always a step behind the smugglers in terms of the methods and places that they use to smuggle their drugs.”

Awaja explained that a law was passed in 2013 making the abuse and trafficking of drugs a felony. Previously they had been misdemeanors. He said the change has helped decrease the amount of smuggled drugs. The Legislative Council in the Gaza Strip, represented by the Change and Reform bloc, affiliated with Hamas, approved the Drugs and Mental Stimulants law, on its second reading in August 2013, establishing severe penalties with the goal of deterrence, including tougher sanctions against dealers, who could face the death penalty, and penalizing drug users.

Ahmad Hassan, a pseudonym, is a 38-year-old drug addict from Rafah. Unable to find the kind of drugs he used to take, he resorted to pills, which due to the tunnels connecting Gaza and Egypt, were and still are available. Ahmad told Al-Monitor that after the Israeli war on Gaza, pills began coming from Egypt by sea, following the extension of the fishing zone by Israel. “The price of a full box of Tramadol was 130 shekels ($34), but today it is 200 shekels ($52),” he said.

Ahmad abused large quantities of Tramadol before its price rose, but today he only takes three pills a day because he stopped working and cannot afford more. “If I had the money, I probably would take more,” he said. Ahmad's addiction has led to his separating from his wife and six children because of social and sexual problems the drugs have caused.

Tramadol and similar drugs consist of derivatives of opioids, such as morphine and heroin. They are supposed to be available only by prescription obtained from a doctor for the treatment of severe pain, such as that due to cancer and some chronic bone conditions. Addicts take these drugs to feel more alive and happy, but with long-term use they can cause depression, anxiety and obsessive-compulsive disorder. Withdrawal symptoms can include insomnia, nervousness, stress, lack of sleep, loss of appetite and significant weight loss. They also pose the risk of heart disease and kidney failure.

Psychologist Ehab Moussa owns one of the psychiatric clinics in Gaza City that deals with drug addicts. He told Al-Monitor, “The problem is that the law criminalized drug addicts, so they became afraid to get treatment from government and private clinics out of fear of being reported. Turning an addict from being a victim into a criminal has reduced the number of cases that come to us for treatment.”

Moussa said the level of addiction in Gaza is stable to slightly increasing, even after the closure of the tunnels. Based on his treatment of addicts, Moussa believes there is a large stockpile of pills somewhere in Gaza. “When I asked one of the young men I am treating where he used to get drugs, he said that he has private sources and dealers. He also stressed that during the first couple of months after the closure of the tunnels, he never ran short on pills. The traders would even offer him more than he needed since there was around a year's worth of pills stockpiled in the Gaza Strip,” he explained.