Is Gaza facing an opioid epidemic?

The impossible circumstances of day-to-day life in the Gaza Strip has led to a Tramadol epidemic that Hamas is struggling to address. 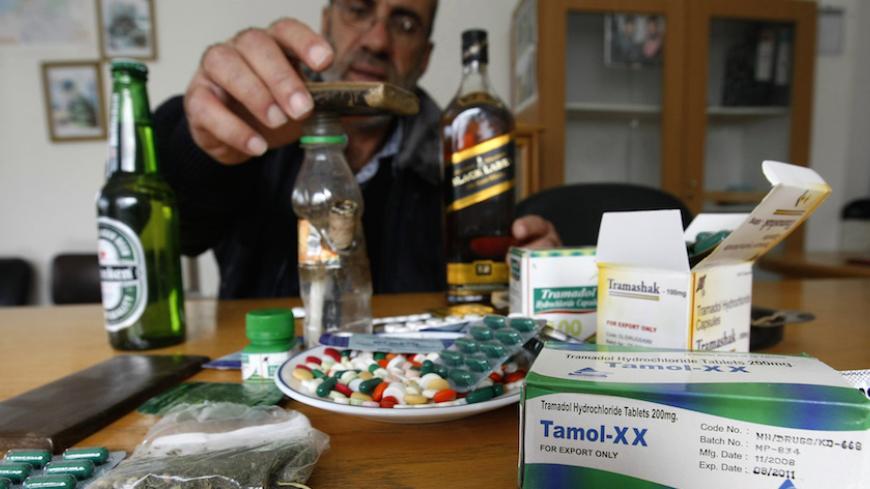 Addiction to Tramadol, a drug that affects the central nervous system and is used primarily to treat severe pain, is yet another symptom of the plight that so many Gazans face after nine years of living under closure, since June 2007. It appears that abusing Tramadol has become a way of dealing with the absence of any hope for change in the foreseeable future.

Frequent Israeli military operations against the Gaza Strip, economic duress, soaring unemployment and the day-to-day anxiety that is part and parcel of Gazans' harsh lives have led many residents — hundreds of thousands, according to Palestinian sources — to take Tramadol on a regular basis. Exact figures on the extent of the epidemic are not available, but sources in Gaza told Al-Monitor that there is someone in just about every household who regularly consumes the drug.

Tramadol first arrived in Gaza through the Rafah tunnels, after Hamas seized control of the territory in 2007, a time when smuggling through the tunnels flourished. A pharmacist from central Gaza who requested anonymity told Al-Monitor that from the time the Muslim Brotherhood took power in Egypt in 2012 until Operation Protective Edge in 2014, Tramadol was a hot commodity in Gaza. He estimated that some half a million pills were sold per day.

According to him, a single packet of 10 pills had initially only cost 10-20 shekels ($2.60-$5.00). “At the time, many of the people living in Gaza were feeling a sense of existential angst because of the various IDF [Israel Defense Forces] military operations and the impossible economic duress,” he said. “This pill is given to patients after surgery. It is not recommended for daily use, but given the overwhelming sense of distress in the Gaza Strip and the cheap cost of a pack of Tramadol, it became a staple in every home.”

It seems as if no one warned the many consumers of the range of serious effects that Tramadol can have on regular users, including the risk of addiction to the drug, which probably seemed like an innocent and effective way to suppress personal crises.

“There are two types of Tramadol,” the pharmacist said. “There is a white pill, which is sold in pharmacies to people with a doctor’s prescription. Tens of thousands of people in Gaza use this medication, most of them for injuries they suffered during years of Israeli attacks. For the most part, they have regular prescriptions for the drug as a painkiller to help them cope with chronic headaches or the pains from burns and other injuries they endured. The second type of Tramadol, especially common in Gaza, is the red pill. It is particularly strong, and its effects on the body are devastating.”

He confirmed that enormous quantities of the red pills were originally smuggled in from Egypt. Though smuggling has declined considerably because of the destruction of many of the tunnels, there is still an almost steady flow of the pills through whatever tunnels remain active.

“The red pills caused widespread addiction throughout the Gaza Strip,” he said. “It is an addiction across social class and age [groups], though it is found mainly in the refugee camps. Users of the red pill include young people, students, university graduates and people with families, including both men and women. They even include teens in distress, searching for an emotional haven from the anxieties that hound them because of the overwhelming sense of hopelessness they feel living in Gaza under siege.

The smuggling market dwindled after Egyptian President Abdel Fattah al-Sisi launched a campaign to eliminate the Rafah tunnels. One consequence of this is that the cost of a pack of Tramadol soared to 150-200 shekels ($40-$50) on the black market.

“Yet, even the high price doesn’t stop hundreds of thousands of Gaza residents from using Tramadol,” the pharmacist added. “These pills are a drug in every sense of the word, and addiction to them is just like any drug addiction. People smuggling these pills into Gaza employ the same methods used by drug dealers everywhere. They have ways to flood the market despite any obstacles or difficulties. The fact is that Tramadol can still be obtained in Gaza. It is readily available to anyone who asks.”

A recent rumor making the rounds in Gaza was that chemistry students at the Islamic University had developed imitation Tramadol, which they were manufacturing in underground laboratories throughout Gaza. While Al-Monitor was unable to confirm the accuracy of the rumor, many local residents claimed that such pills are considerably cheaper, 80-100 shekels ($21-$26), and that regular users can identify the tablets by their lighter color, dark specks and gritty texture.

Hamas is currently waging a bitter war against the Tramadol epidemic. Al-Monitor has learned that tens of thousands of pills were found during raids on the homes of dealers and distributors. The supplies were confiscated, and the dealers arrested. At the same time, Hamas is trying to keep the extent of the epidemic under wraps. The movement’s leaders find it uncomfortable to admit to the circumstances that have led so many Gaza residents to become addicted to the drug. It would be an admission that the people of Gaza, under their regime, are actively seeking a remedy for or relief from their harsh circumstances.

A resident of Gaza told Al-Monitor on condition of anonymity about a rehab center in the Gaza Strip that treats drug addiction in general and addiction to Tramadol in particular. Most of the patients have families to support and had become addicted to the drug when it only cost a few dozen shekels. Because of its current steep price on the black market, they can no longer afford it.

The rehab center, located in the Jabaliya refugee camp, is staffed by dozens of volunteers. Nevertheless, when it comes to dealing with this crisis, even they are just a drop of water in the Gaza Sea.