Drug trafficking, dealing and consumption have quickly spread in the West Bank, where security is loose. 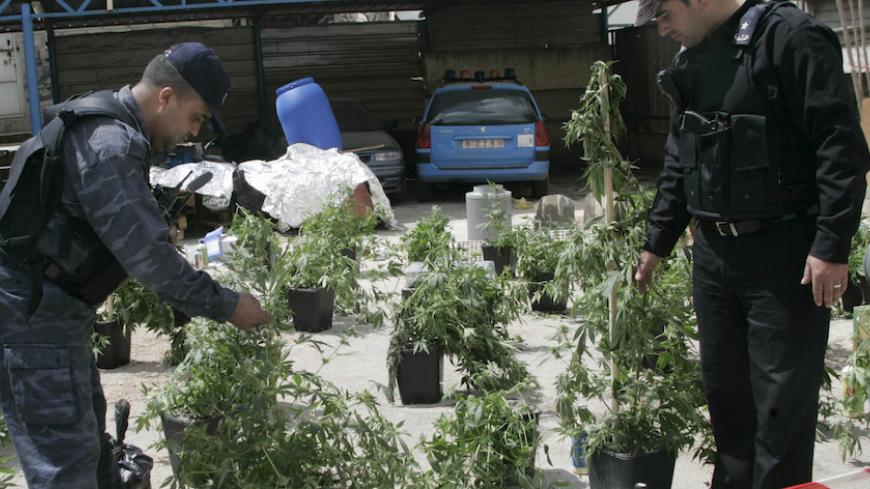 RAMALLAH, West Bank — Mohammed Mohammed, who prefers to go by the pseudonym, is not ashamed to talk about his experiences of drug abuse. He was working as a construction worker in Israel when someone first gave him some hash to try.

Mohammed, 31, makes around 5,000 shekels a month (about $2,000) from his construction work and spends it all on drugs. Although Palestinian police have arrested him five times — he spent less than a month in jail each time — he has not stopped consuming drugs.

The residents of his village Sanniriya, located north of the town of Qalqilya, whisper among themselves about Mohammed and the other young men who buy and use drugs from Israel, which is nearby since the village is located close to the demarcation line between it and the West Bank.

Mohammed, who is single, told Al-Monitor that he does not even think about quitting. “I have been doing drugs for over seven years now, and I don’t think I can go to a rehab clinic,” he said. When asked why he can’t quit using drugs, Mohammed said, “I don’t know.”

Drug usage is not the only problem the West Bank faces: residents are also selling and even planting or manufacturing drugs. A May 18 police statement noted the discovery of 370 plants and 54 kilograms (119 pounds) of a dried substance suspected to be a narcotic in two plantations in the province of Jenin. The police made similar announcements May 20 regarding the arrest of drug dealers in Jenin, Salfit and Tulkarm.

Since the beginning of 2015, the usage and selling of drugs have significantly increased in the West Bank. According to police records, 250 kilograms (551 pounds) of drugs were seized during the first quarter of 2015 compared to 65 kilograms (143 pounds) throughout 2014. These figures drew renewed attention from the Palestinian street to the issue of drug use.

Afaf Abu Rabih, an official at Al-Sadiq Al-Taieb Association, a drug awareness program, said, “There is a terrible rise in drug abuse in the West Bank.” Over the past four years, Abu Rabih said, a new kind of drug has emerged — a homemade chemical drug, so-called Amsterdam or Oxygen, that is considered extremely dangerous.

Even more dangerous is the spread of drug abuse among youths aged 11-14, according to Abu Rabih. Furthermore, in the past, the Jerusalem region was the center of drug use; however, the phenomenon has now spread throughout the West Bank. Previously, drug abuse was limited to individual consumption, but it has now become a wider phenomenon with the increase in the manufacture and planting of drugs, Abu Rabih told Al-Monitor.

According to a Palestinian Central Bureau of Statistics study carried out in 2007 and updated in 2011, there are 80,000 drug users and addicts in Palestinian territory, between Jerusalem and the Gaza Strip.

Palestinian police spokesman Lt. Col. Louay Zreikat told Al-Monitor that the years following this study witnessed a significant rise in drug use, citing police records that document an increase in the amount of seized drugs.

Zreikat attributes this increase in drug seizures to the police’s improved capabilities in pursuing drug traffickers and dealers thanks to enhanced training and cooperation among Palestinians. Furthermore, he said, “Drug dealers plant [drugs] in the West Bank, where seeds, fertilizers and agricultural lands are available, in addition to the required technologies.”

He added, “This type of agriculture [drugs] requires big capital, which is why Palestinians have often been involved in this since 1948. In addition, Israelis fund these plantations, mainly to make profits.”

According to Zreikat, drugs are planted locally because of lower production costs and easier distribution in Area C, where security is “loose” since it is completely controlled by Israel. Israel generally coordinates with Palestinian security forces to allow the latter to operate in territories under Israeli control. However, when it comes to the drug issue, Israel deliberately prevents the Palestinian security apparatus from doing its job hunting down and arresting drug dealers, Zreikat said.

He added that Palestinian police encounter numerous problems in cracking down on drug use. Due to a 1960 Jordanian law, which is applicable in the West Bank and Gaza Strip, the police may pursue drug dealers for years only to have them released on a bail of 50 Jordanian dinars ($70) due to a lack of evidence. Zreikat called for a new preventive law.

The lack of rehab clinics is another problem. “This epidemic, which began to spread in Palestinian society [over the last 10 years or so], requires a comprehensive national plan in which all public and private institutions are involved,” Zreikat said.

Abu Rabih reiterated this point, stating that Al-Sadiq Al-Taieb is considered one of the only associations to operate in a comprehensive and specialized manner to fight drugs, spread awareness and provide rehabilitation. Up until 2005, it was the sole association of its kind, but now other centers have been established.

Abu Rabih has worked in this field for 20 years, but she explained that her association and others are not enough to fight the recently aggravated drug phenomenon. Governmental and institutional action against drugs must converge.