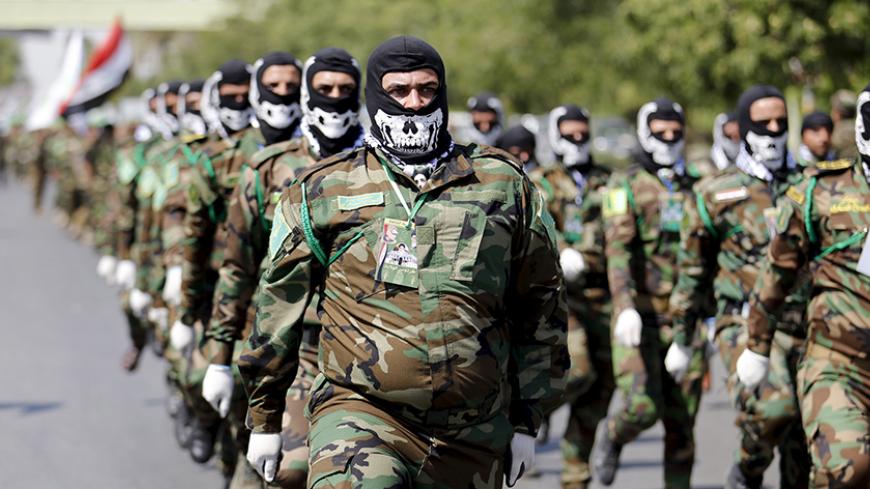 In September 2014, Ahmed al-Khafaji enlisted at the age of 25 in the Popular Mobilization Units, which were formed in accordance with a religious fatwa issued in June 2014 by the Shiite religious authority in Iraq, Grand Ayatollah Ali al-Sistani, with the aim of fighting the Islamic State (IS) following its invasion of the city of Mosul that month.

After Khafaji spent a few weeks learning how to use weapons in a training center in Babylon, 100 kilometers (62 miles) south of Baghdad, he participated in the liberation of Jurf al-Sakhar city, south of Baghdad, in October and suffered an injury to his left shoulder.

Khafaji received a couple of friends in a small room of a rural house located on the outskirts of the city of Hilla in Babil province. The house lacked the most basic essentials — including ventilation, furniture and cold water — at a time when the temperature was around 50 degrees Celsius (122 degrees Fahrenheit). As he pointed his finger to the picture of Sistani hanging on the wall, he told Al-Monitor, “I fight to defend the nation and heed the call of this man who saved Iraq from falling into the hands of IS terrorists.”

Skimming through pictures of himself with his fellow fighters, Khafaji added, “I fought as a volunteer and did not wait for any financial reward. I practically have not received my salary for two months, but this will not prevent me from returning to the battlefronts as soon as I recover."

Jawad al-Shammari, media director at the Office of the UN High Commissioner for Human Rights in Iraq, told Al-Monitor, “This type of fighter is not an exceptional case.”

Saudi newspaper Al-Jazirah published an article June 3 by Saudi writer Jasser al-Jasser stating, “Members of the sectarian Popular Mobilization Units have set fire to the body of an Iraqi citizen who hails from the city of Fallujah, north of Baghdad.” Wahhabism, which is anti-Shiite, is dominant in Saudi Arabia.

Opponents of the Popular Mobilization Units — Sunnis inside or outside Iraq — deem the forces a “sectarian” militia. This was stated in an article by Jordanian writer Yasser al-Zaatreh, a Sunni, published in April in the Jordanian newspaper Ad-Dustour, in which he wrote, “The Popular Mobilization Units are simply militias comprising many unemployed people who were enlisted and driven by horrible sectarian hatred."

Political parties in Iraq, such as Sunni member of parliament for the National Union of Forces Dhafer al-Ani, attacked the Popular Mobilization Units, calling them "sectarian.”

Independent social affairs analyst Ali Abu Iraq told Al-Monitor, “The behavior of any fighter on the front lines is a reflection of social upbringing and religious faith.”

He said, “The Popular Mobilization Units include nonprofessional fighters as well as groups that received a high level of training, and these are professional and ideological fighters who fight based on sectarian and political agendas.”

Abu Iraq added, “Those who heeded Sistani’s fatwa are fighting for the implementation of a religious duty based on their belief.”

The fact that the Popular Mobilization Units are gaining clout indicates that they have exceeded the role they were initially set up to play — namely deterring IS — and might be playing a political role in the future.

This view was underlined by the former spokesman for the Iraqi National Congress, Mohammed Hassan al-Musawi, who told Al-Monitor, “The Popular Mobilization Units will be the political alternative for the Shiite National Alliance. Despite the fact that the [Popular Mobilization Units] now represent a military system, their future will be similar to the future of Hezbollah in Lebanon as they will be fighters with a political arm.”

It seems that there are political and sectarian factors that have started to overshadow the perception of the Popular Mobilization Units, which are turning these fighting factions into a political controversy to be added to a panoply of other issues that are not agreed upon in Iraq, such as the disputed regions, which party should be held responsible for the fall of Mosul and the sharing of the oil wealth.