Operation Decisive Storm has stirred different positions within the Iraqi religious and political circles, be they Sunnis or Shiites. 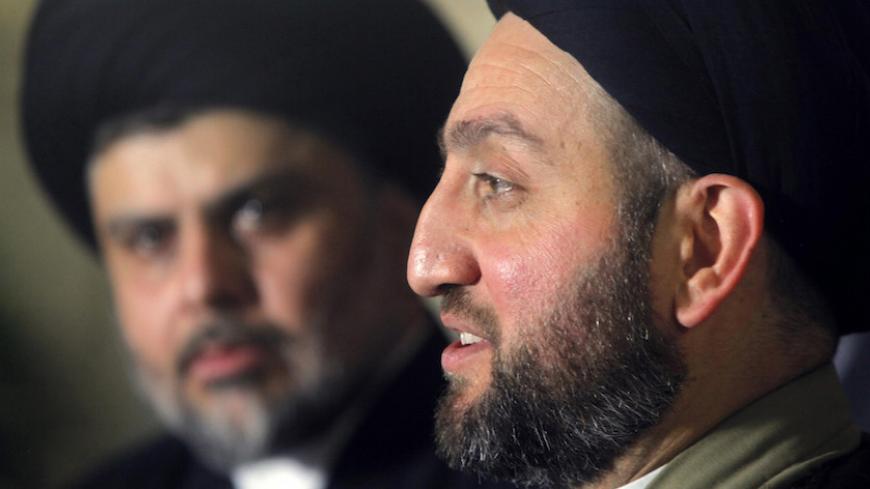 BAGHDAD — Operation Decisive Storm in Yemen has stirred the Iraqi sectarian divide. While the Shiite majority opposes the campaign, the Sunnis are voicing support for it. These differing positions, expressed for the Shiites by the National Alliance and for the Sunnis by the Union of Nationalist Forces, led to a disagreement at a meeting of Iraqi political forces held at the home of parliament Speaker Salim al-Jubouri on March 29, when the Sunnis rejected a Shiite alliance proposal to issue a statement condemning the Saudi-led military operation.

Vice president Osama Najafi, a Sunni, had on March 28 announced his support for the “Arab alliance, which aims to undermine the Houthi influence in Yemen.” In an April 1 TV interview, Ammar al-Hakim, a Shiite and head of the Islamic Supreme Council, described the military intervention in Yemen as “a costly adventure with uncalculated consequences.”

Laith Shubbar, an academic researcher and presidential adviser, told Al-Monitor, “This war has effectively contributed to fueling sectarianism not only in the Iraqi conflict, but in the entire region. The ​​wars, disputes and media fuss plaguing the area clearly reflect ongoing sectarian mobilization, which distracts the people of the region with internal fighting and conflicts in a bid to weaken them.”

Operation Decisive Storm has also divided Iraq's religious institutions. The Sunni Association of Muslim Scholars announced its backing of the campaign in a statement issued March 29, referring to it as the “Arab effort aimed at supporting the Yemeni people and confronting the Iranian tide.” On the other hand, the cleric Muqtada al-Sadr, leader of the Sadrist movement, categorized the operation in a March 27 interview as “interference in the affairs of the Yemeni people.”

The sectarian controversy over the operation became a cross-border verbal altercation when the vice president of the Iraqi parliament, Humam Hamoudi, a Shiite, described the operation on April 1 as “a sectarian war,” and the Saudi writer Jasser al-Jasser, a Sunni, retorted April 4 in an article in the Saudi newspaper Al-Jazirah, stating, “[Hamoudi] is being dragged behind sectarian allegations voiced by politicians and public opinion leaders in Arab countries that are subject to Iranian influence.”

Journalist Hassanein Ali, a Shiite from Babil, responded to Jasser in an interview with Al-Monitor, saying, “Saudi Arabia has been acting since 2003 [the year in which Iraqi President Saddam Hussein's regime fell] as a defender of Sunnis in Iraq, while seeking to promote the idea that [Sunnis] are marginalized in the Shiite-led government. [Saudi Arabia] has also supported the Sunni politicians who now support the war waged by Saudi Arabia and its allies on Yemen.” Ali claimed, “This [Sunni] moral and material support given by Saudi Arabia to the Sunni leaders in Iraq pushes these leaders to follow the Saudi positions.”

The Iraqi government officially opposes Operation Decisive Storm, as indicated in a statement by Foreign Minister Ibrahim al-Jaafari that the military intervention complicates and leads to the militarization of the situation. The Iraqi writer Daoud al-Basary attacked this position April 4 in an article published by the Qatari Al-Sharq newspaper, calling Jaafari's statement “irresponsible remarks that entrench sectarianism.”

The political analyst Abdul Karim Badr al-Hamdani, a Shiite who defends Iraqi Shiites in media appearances on “Al-Itijah al-Mouakes” [Wrong Direction], told Al-Monitor, “Saudi Arabia is waging a sectarian war against the Shiite Houthis,” adding that “internal differences cannot be solved through military means.” According to Hamdani, “The war will destroy Yemen’s social fabric under the pretext of protecting it.”

Fouad Nasser Ibrahim, another political analyst, told Al-Monitor, “Most of the Shiites feel there is a frightening cosmic sectarian war against them, while most of the Sunnis believe that they are also being targeted by the war.” This to him is the source of the sectarian divide over Yemen. “This mutual feeling of danger on both sides leads to bitter sectarian conflict,” he said.

In contrast, Salama al-Salhy, cultural adviser to the prime minister, told Al-Monitor, “There is confusion when it comes to the positions on the war, and these positions are based on political agendas, not necessarily on sectarian ones.” Salhy described the Yemeni events as “an international game aiming to [empty weapons stores], absorb Gulf funds, flirting with Iran, trap the Arabs and drag the Egyptian army into a hideous regional conflict.”

Iraqi Shiites have begun to publicly express their opposition to Operation Decisive Storm in demonstrations like the ones held April 1 in Baghdad under the auspices of the Shiite Al-Ahrar Bloc and April 4 in Babil​. Shiite protesters in Maysan on March 31 had also denounced the “Saudi war on Yemen.”

Iraqi Sunnis appear for now to be abstaining from displaying support for the war, although some Sunni political organizations — such as the Union of Nationalist Forces, the Association of Muslim Scholars, which have called for a war in Syria and Iraq — and the Anbar tribes have come out in favor of it. The writer Sabah Atwan expressed his hope to Al-Monitor that “the Iraqi people be united and that they not allow such positions to divide them.”